HELLO, SESTRAS. This is a recap for Orphan Black episode 305, “Scarred By Many Past Frustrations.” I was trying very hard to get a recap up for last week’s episode, but what happened was a lot of really super queer stuff in real life and also on television, and so much A-Camp preparation, and Orphan Black had no queer stuff and was very Castor-focused, so it kept getting shoved to the bottom of my endless to do list. And now here we are. So I am going to recap this week’s episode fully, and tell you very quickly what happened last week. Okay, sestra? Okay.

Gracie’s mom shot Mark in the cornfield and then skedaddled because she assumed he was dead. Who gets hit with some shotgun shells and walks away? Well, Mark, that’s who. Sarah dragged his ass halfway across Canada to some random cabin in the woods, pulled the bullets out of his guts, and sewed him up. In the middle of the surgery, Mark confessed he was torturing Johansson because he was pretty sure Johanssen had an original sample of Castor DNA. And Mark was right. But Johanssen used the DNA to try to make his own clone baby and that clone baby died when it was still barely born, and so Sarah and Mark dug up the baby’s bones and of course Rudy found them doing it, so the brothers decided to take the bones for themselves and “tie up the loose end” of Sarah. 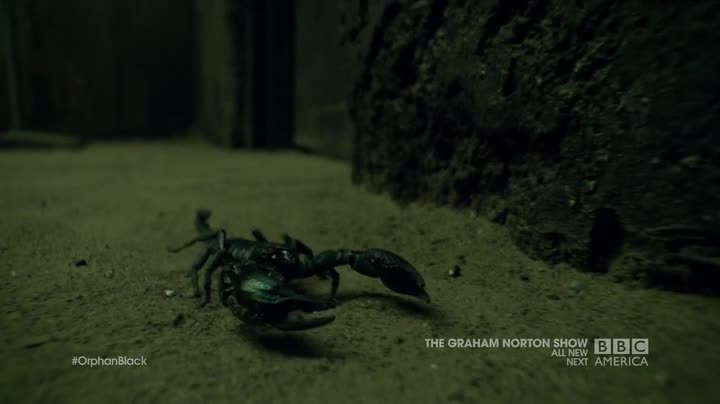 OOOHHHHHHH, who lives in a pineapple under the sea? 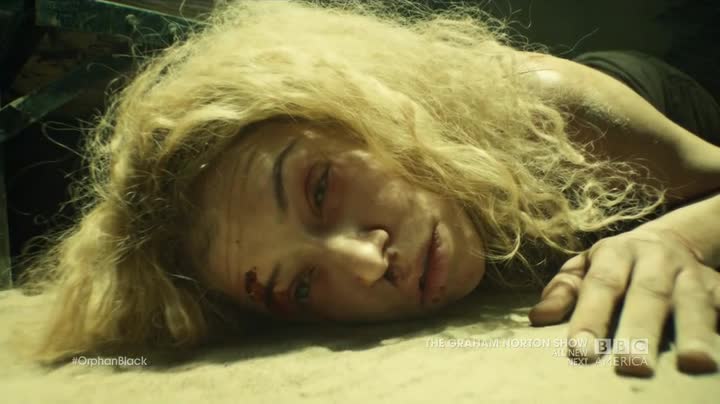 Shut up about the pineapples.

Helena chewed a pork chop bone into the shape of a skeleton key and broke herself out of her cell at Castor HQ, but then found one of the Castor clones in a hospital room with the top of his head sawed off because Mother and some doctors were messing with his open brain. He asked Helena to kill him, so she used her pork chop key to do that by stabbing his literal brains.

And Allison and Donnie upped their drug game by making promises to the kingpen supplier of the neighborhood, who, it turned out, was Alison’s high school boyfriend.

Also, Gracie lost her baby and the Proletheans kicked her out of their cult.

305: “Scarred by Many Past Frustrations”

Rudy is feeling extra proud of himself for bringing the baby bones back to Mother so they can mash them up into some kind of potion to cure the Castor clones’ brain glitches. Rudy wants to stay around and do the alchemy, but Mother tells him to take off the weekend and go bang ladies and chop off their hair and write about his humpings in his diary and hang out on the MRA boards or whatever. Just hit up that warp zone that connects Mexico with Toronto and be back in 48 hours. Rudy kisses Mother on the cheek and bounces. 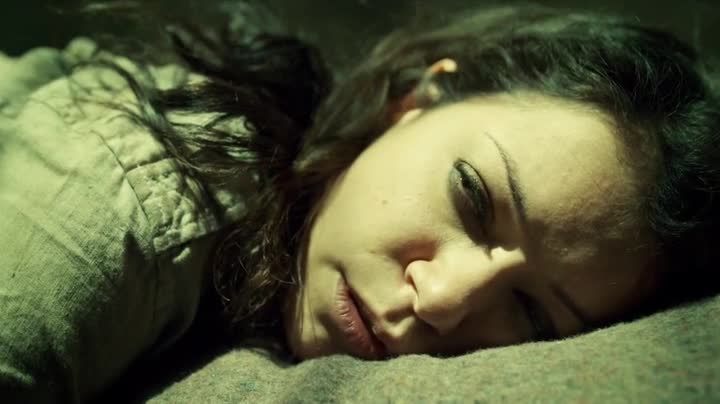 I had the weirdest dream Alison was a drug dealer.

Sarah wakes up from her kidnapping and finds herself in a cell at Castor HQ. She yells a lot of insults and climbs up onto her bed to try to see out of the tiny window near the ceiling. And then, through the vent in the wall, she hears Helena talking about, “Not so smart after all, are you?” Sarah is shocked and relieved and she scrambles over to the vent to try to see her, but Helena’s not interested in reconnecting. Kill her once, shame on you; kill her twice, and you’re going to hurt her feelings. Sarah tries to explain about how it was Ms. S who did the dirty dealings. Ms. S and Paul. She begs Helena to at least peep her through the little grate separating them, but thanks to Pupok, who is being a real butt hole today, Helena isn’t feeling it. 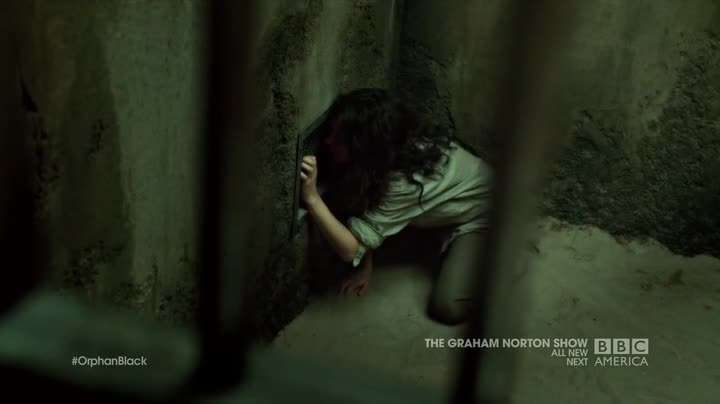 Hello, yes. One Iced Capp Supreme and an order of 10 Timbits, please. 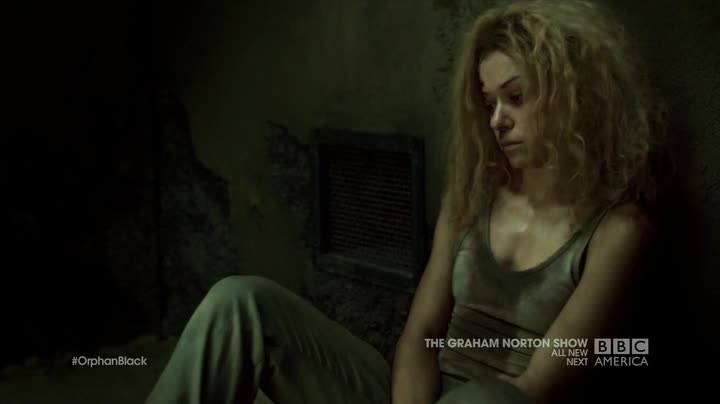 Felix and Ms. S are starting to panic a little about Sarah disappearing. She used to do this shit all the time, of course, but that was before she discovered she was part of a sisterhood of clones being relentlessly monitored, pursued, and murdered by every governmental shadow agency and cabal of mad scientists in the world. Felix distracts himself with Cosima’s problems. Well, one of Cosima’s problems at least. The problem of her deep and debilitating heartbreak. He has signed her up for a dating app called Sapphire and she is, at this very moment, waiting to meet someone named Shay at the local pub.

Felix: Give it 20 minutes before you bail, do you promise?
Cosima: Knowing this show, a sniper will shoot me in the face through the pub window by then, but okay.
Bartender Bobbi: Just don’t talk about your ex, girl.
Cosima: What? I’m not going to talk about my ex. Do I look like I want to talk about my ex?
Bartender Bobbi: You look like you want to go home and pile up the clothes she left behind and roll around in them like a cat while listening to Bon Iver and eating ice cream with your hands. 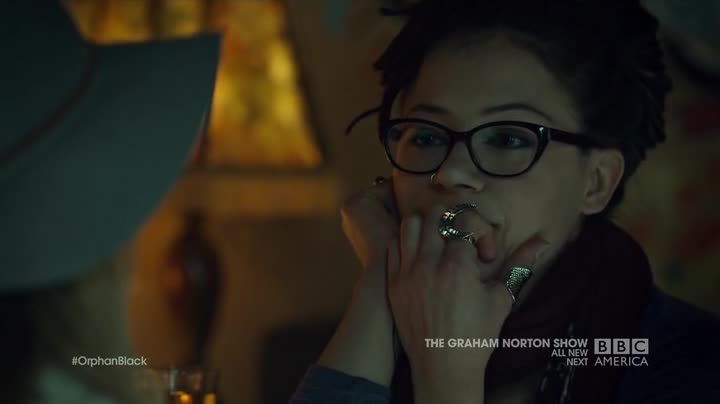 Okay, but like, it doesn’t make sense, medically, that sexual energy can heal a person. 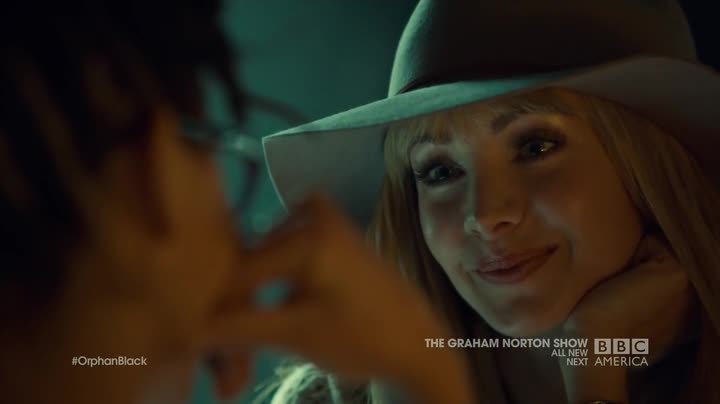 Wanna test out that theory?

Cosima promises to keep it tight for at least half an hour, okay, and then Shay walks into the bar. (It’s Ksenia Solo and she looks like Kenzi and sounds like Kenzi but she’s so not Kenzi.) Cosima tries to make small talk and it’s more awkward than all the small talk you’ve ever made in your life, but Shay is super into it. She calms Cosima down by weaving a yarn about her first terrible Sapphire date. But also, she makes Cosima even more nervous because her voice is so sultry and she doesn’t break eye contact. It’s intense, and kind of — I feel hypnotized watching it happen, and Shay’s not even staring into my soul like she’s doing to Cosima. The challenge soothes Cosima, I think. She likes to win. She settles in and levels up her banter and it’s pretty wonderful.