At Ms. S’s house, Gracie is feeling blue, so S comforts her with a story about how she, too, once lost her husband at a young age, and she didn’t let that stop her from growing up and moving to the United States to escape the militant scientists who were trying to wreck her foster daughter’s life, or grandmothering a magical unicorn child, or raising the glory that is Felix Dawkins. I mean, yeah. Sometimes a person gets stabbed to death in her basement. And sometimes people get kidnapped through the windows of this very bedroom. And yes, on occasion, a manic clone trooper will creep in and beat the shit out of her while demanding information about the demented genetic engineer she used to keep chained to the kitchen table, but like, it’s been a pretty good life. Felix listens from the doorway and feels such an affection for his mama. 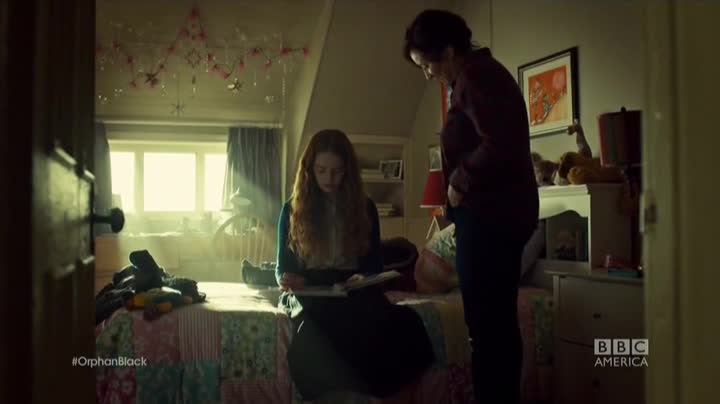 Sarah looks so happy when she’s not being relentlessly stalked like a deer.

Cosima and Shay have retired to Felix’s loft for massages and talk of novels, teacups, and skirts that trail along the floor. They’re listening to some sex music about “I don’t know what I should do! I’ve got a fever!” And that about sums it up for Cosima, whose pants are on fire right here in Toronto, but whose heart is 4,000 miles away sipping on a Bordeaux and snacking on some cheese and making science sound like foreplay. 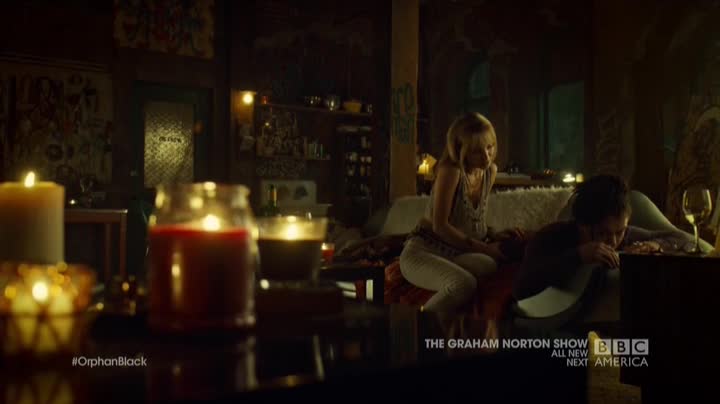 What? Friends light a hundred candles and listen to scissoring playlists in the dark.

Shay: Should I go?
Cosima: I … don’t know.
Shay: Do you want to talk about your ex?
Cosima: I … don’t know that, either.
Shay: I’ll go.
Cosima: Cool, yeah, whatever.
Shay: [gathers her purse and giant hat and whatever else. crystals. tarot cards. love potion.]
Cosima: Okay, look, her name is Delphine and she’s like — you think femme fatale, right? The hair, the skin, she’s fucking French, okay. But then, like, she’s warm. Her touch is warm. The way she smells is warm. 324B21, you know?
Shay: What’s 324B21?
Cosima: Exactly.
Shay: Should we kiss real hot on the lips anyway, a little tongue, while this sex music plays on?
Cosima: Yeah, for sure. 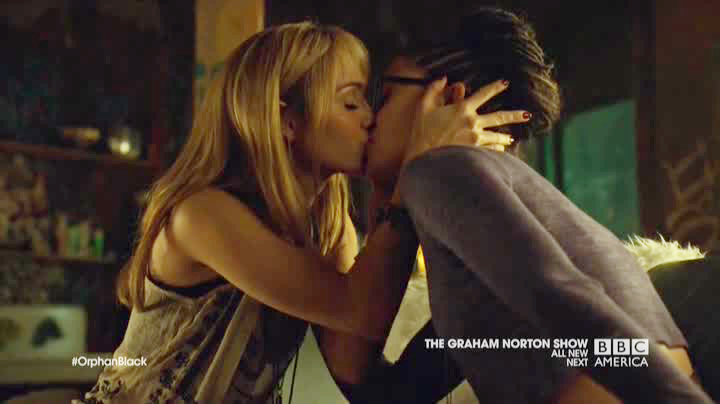 Guh! I’m like Cosima, y’all. I know who owns my heart, but I’m also not blind!

Okay. At Castor HQ, Sarah drops her prickly armor and tells Helena the whole truth about how she had to let Kira go this time, but that she walked out on her once before, to be with Vick, and it was to try to prove something to herself or to Ms. S, she can’t even remember what it was anymore, but what she does know is that she lost a year of her life with Kira that she’ll never get back, and now she might die in this stupid cell in the middle of the Canadian desert. Helena goes from joking that Sarah can be her sandwich when she escapes, to telling her the plan for getting out of here. 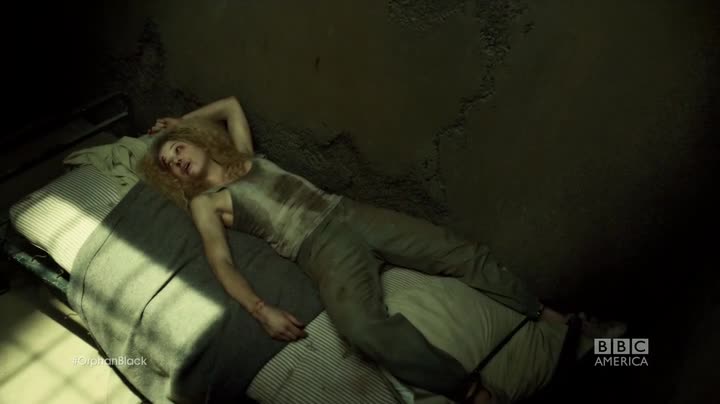 How are those Timbits, Sestra? Are the cherry cake ones delicious?

First thing is, Sarah has to incite the guards to punch her in the face so she can go to the infirmity and steal anything sharp. Next thing is, she sneaks the sharp thing to Helena with the old “shoelace pendulum” trick. Then, Helena — not even kidding — removes a loose brick from her wall and lathers herself up in the little butter packets she’s been collecting from her lunch tray. She knocks one of the bars loose on her door, and contorts her way through there, all slicked up, while Sarah keeps a lookout. After she’s out, Helena takes out one of cameras and then kills one of the guards. And then. AND THEN. She leaves Sarah behind! She says it makes them even! She leaves Sarah behind while Sarah cries and smashes herself against her door! 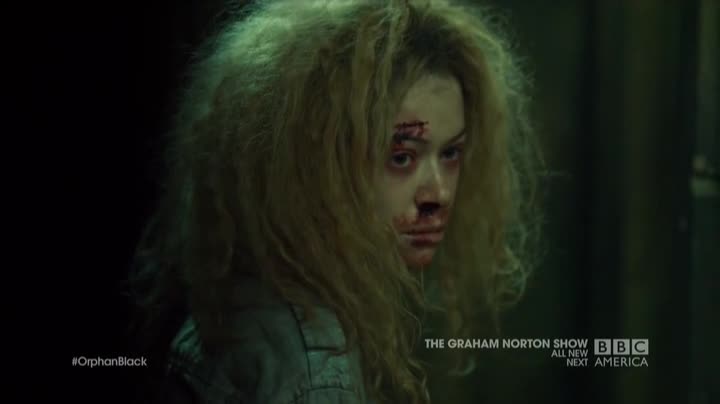 Kristen Stewart and Alicia Cargill are only friends. 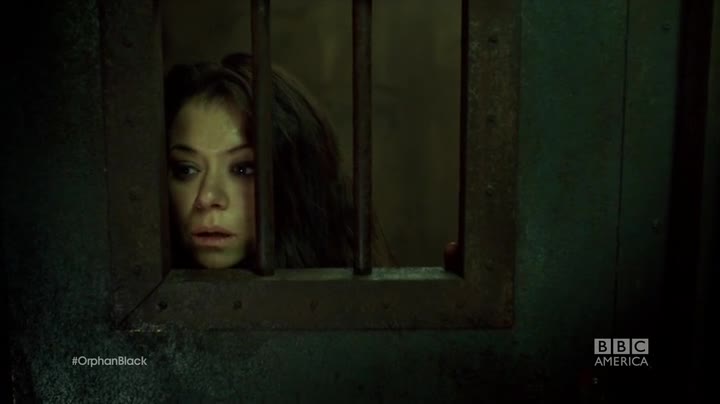 You’re just trying to hurt me.

Once she’s parkoured her way to the top of the fort, Helena thinks about going back for Sarah. She tells Pupok Sarah tugs at her heart. But that jerko scorpion convinces her to run out into the night alone and let Sarah rot. PUPOK, YOU DEVIOUS BASTARD! I THOUGHT I KNEW YOU! I will never give you any of my mangoes, Pupok! Never!

Gracie decides she’s going to become a real person who isn’t in a cult, so she suits up in something Sarah bought from Hot Topic when she was 16 and announces her plan to hit the clubs. Felix thinks it’s the funniest thing he’s ever seen in his life, but Ms. S talks Gracie into staying for a few cocktails and dancing with Felix in the living room. It’s all fun and gin and juice until Gracie doubles over with stomach pain and Ms. S tells Felix to call 911. 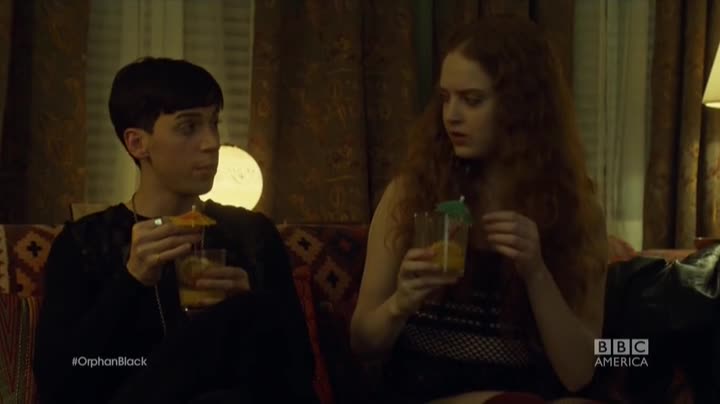 It’s orange juice with a splash of Ambien.

The paramedics show up to examine her and while they’re doing that, Art calls on the woman Rudy and Seth raped. She’s been out of touch because she’s been sick. Her eyeballs are bright red. She says the doctors don’t know what it is, so maybe the Castors gave it to her. And at the same time, the paramedics open up Gracie’s eyes and hers are red like the fires of hell also.

And that is why misandry is the order of the day, children.

Next week: Delphine rushes home because she heard Sarah was kidnapped, and Cosima tries to play it cool because she’s been boning Shay, but: ha! I am so sure! Felix and Cosima tag team to extract information from Rachel. And Helena goes back to Castor HQ to rescue Sarah and murder Paul.