Art’s at home flipping out about how Sarah has disappeared, when Gracie shows up looking for a place to crash. The last woman he let hang out here after she left the Prolethean compound ate all of his snacks. So Art takes Gracie to S and Felix instead. Ms. S feels a deep sense of empathy with the lost little widowed chicken, but Felix does not. His emotional chain of command goes: Loyalty > Fierceness > Flawlessness > Gayness > A bunch of other things > Empathy. And since Gracie comes from a religious cult that keeps kidnapping and murdering his sisters, he’s not feeling particularly gracious toward her. And I’ll tell you this: Felix is more of a brother to Helena and Alison and Cosima and Sarah than those Castor jerks EVER will be. Fuck the DNA. (You heard me, hard science. I said: Fuck. The. DNA.) Felix eventually relents and helps Gracie settle into Sarah’s old room that is now Kira’s old room. He gives her a box of Sarah’s clothes but doesn’t warn her that people that one person per day dies in this house. 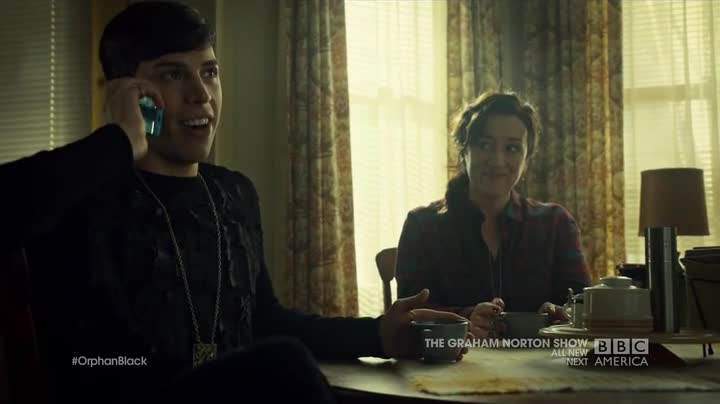 No, check this. She doesn’t even know who the Kardashians are. I’m like, “Kimye” and she’s like, “Is that a sandwich?”

He does tell her he’s gay in an attempt to throw her off her recent birth into the secular world, but even Gracie’s not that sheltered. She says she knows and it’s whatever. No big deal. It’s not like he’s an abomination, like a woman who can’t have a child or something.

Sarah: Okay, look. I know I shot you one time. And I’m sorry. But this one wasn’t me, Helena. You’ve got to believe me.
Pupok: She’s just going to crush you again, like some hot butter.
Helena, verbatim: Shut up about the butter!
Sarah: You’re a jerk.
Helena: You’re a jerk!
Sarah: Fine! I want my #EvanRachelWould t-shirt back and don’t ask me to cover for you again when you’re out stabbing people in the guts!
Helena: FINE! And you don’t ask me to spy on your boyfriend when he’s bonking the rich one!

One of the Castors and a not-Castor come clanking in and feed Helena a tray of food through a slot in her door. They drag Sarah to see Mother. The first thing out of Sarah’s mouth is not, “Let me go!” Or, “How dare you!” Or, “Oh, you wait until Alison finds out about this!” The first thing out of Sarah’s mouth is, “What the fuck did you do to Helena?” In this world of constant flux and assholery, one of the only things Sarah knows she can count on is Helena’s generosity and affection, however cuckoo bananas those things manifest themselves. Well, Mother says not even to worry about it because Helena has been in a cage her whole life and so this is probably comforting to her. And then she extracts one gallon of Sarah’s blood for the potion she’s making with the baby bones. 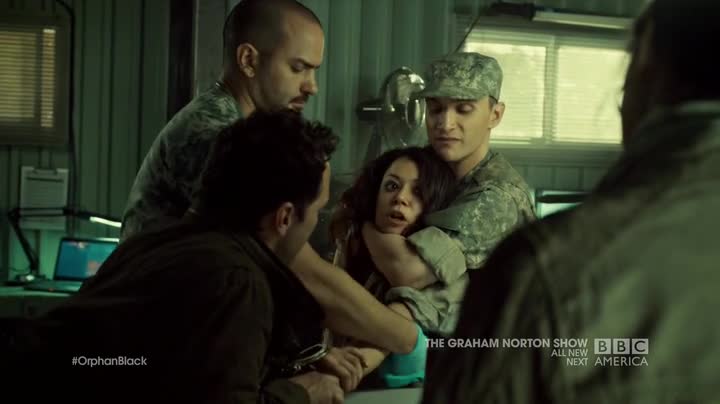 I hope you never win another Motherboy pageant!

Back in her cell, Sarah argues with Helena some more about how she probably likes being institutionalized. Helena doesn’t know what the word “institutionalized” means, so she just catalogues it as a general insult to employ at her leisure.

At the Cubby Hole, Shay and Cosima are getting flirtier by the second, talking about holistic medicine (which is always just an excuse to touch someone you like, I think) and the science of sensing another person’s sexual consciousness with your mind. The whole time they’re leaning in on each other, someone’s outside snapping photos like Initiation Day in Rosewood, PA. (Step one: Here’s a supernaturally amazing lesbian human. Step two: You’re getting stalked. Step three: Enjoy this hole in Spencer’s backyard, bye.) Cosima asks Shay if she wants to peace to a more private/comfortable place, and duh, of course she does. 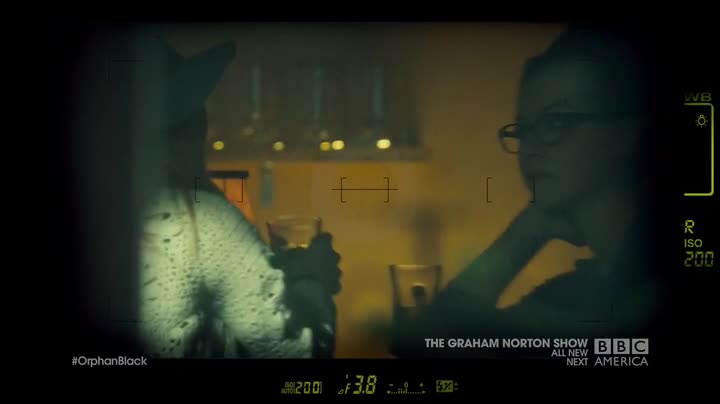 Life is but a dream, Hanna. And I’m your nightmare –A 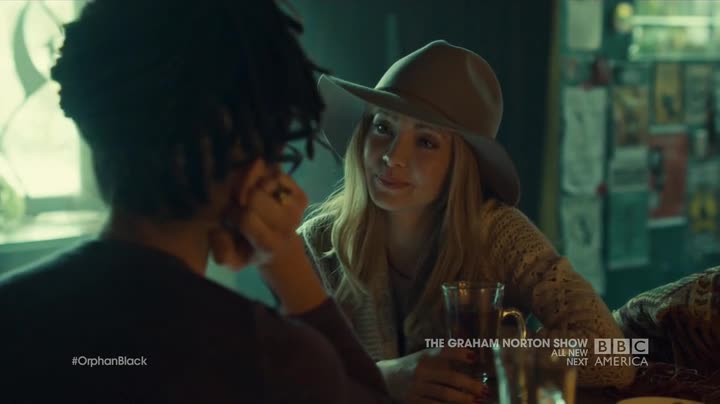 Back at Castor HQ, Paul comes busting in, which means we get to hear Helena call him “Dirty Paul” and make smoochy noises at him through the vent while he chastises Sarah for screwing up the hero narrative he’s writing for himself in his imagination.

Paul: I saved you, I am Batman!
Sarah: No, you ass. You hurt Helena; that is the opposite of saving me.
Paul: Well, I saved the brothers, too! That’s my whole thing! I saved the brothers like you saved the sisters!
Sarah: Yeah, forging a trail of destruction in every direction to keep a bunch of brainwashed rapist soldiers alive is real heroic, Paul.
Paul: Helena kills people too!
Sarah: Yeah, to put them out of misery when their brain is poking out the top of their skull.
Paul: Well, this is out of my hands now.
Sarah: Gosh. Not having control over what happens to you or the people you care about, that must really suck donkey nuts. I can’t imagine what that must feel like. What next? The government will start regulating what you can and can’t do with your dick?
Helena: [giggles]
Paul: I am just going to make this face I make.
Sarah: Yep. That’s the face you make.

As Paul is storming out, Helena teases that maybe he’s the one she’ll kill next and Sarah smashes her face into the bars to agree about it. 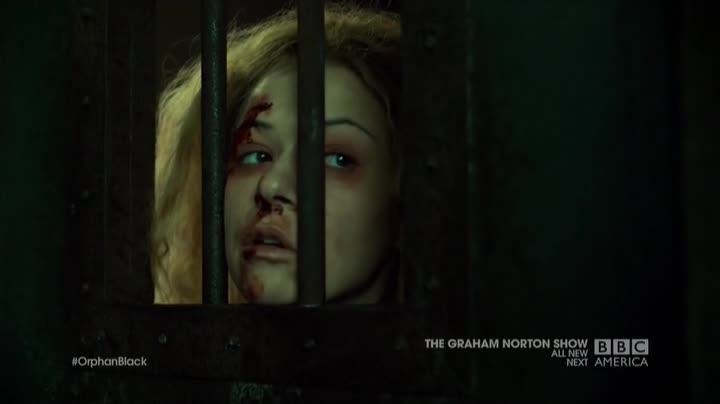 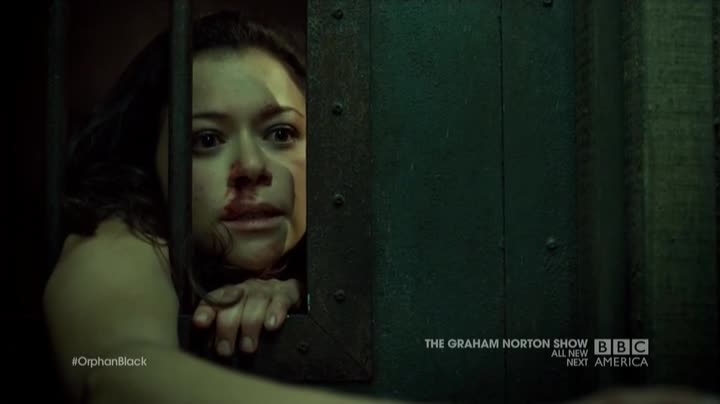 Yeah, guess who’s there, Paul? It’s us and we’re going to murder you!

Paul’s next stop is the infirmary where Mark is recovering from his shotgun wounds. Mother is just pulling his wedding ring off his finger and handing over one of those sexual encounter diaries, when Paul busts in with his existential crisis. This is what it has taken for him to start questioning what he’s doing with his life. Seducing Beth and building a life of deceit around her, letting doctors experiment on her in the middle of the night, bartering Helena like a piece of property, twiddling his thumbs while people tinker with an alive guy’s exposed brain: Whatever, NBD. You do you. But now Sarah’s calling him a wanker, and he’s like, “But Mother, are we monsters?” (Spoiler alert: Yes, Dirty Paul.)