We’re inching ever closer to the most exciting gay TV week of the year: A LEAGUE OF THEIR OWN’S PREMIERE! We’ve been talking about it nonstop in Slack this week and we cannot wait to start sharing it with you. In the meantime, this week Natalie recapped a very gay and dramatic episode of Good Trouble and Valerie  Annerecapped a very intense episode of Motherland: Fort Salem. Kayla wrote about the blossoming homoeroticism of The Real Housewives Ultimate Girls Trip: Ex-Wives Club. Valerie Anne showed you the biceps and eeeeviil machinations of Resident Evil’s lesbian CEO. And Stef’s essay on Wishbone? Well, you just gotta read it. On the movie front, Heather shredded Ruby Rose’s 1Up. And Drew wrote another brilliant film essay: this time on the lesbian classic Kamikaze Hearts.

+ The new season of grown-ish premiered this week and while most of the episode was devoted to passing the baton from one Johnson kid to the next — Zoey to Junior, as the show’s new lead — we were introduced to some new faces. Among them, Junior’s new roommate, Zaara…a relationship borne out of gender inclusive housing. In the premiere, we learn she’s a serious student, who passed on Harvard, Brown and Yale for Cal U’s accelerated medical degree program.

Admittedly, I was not that interested in grown-ish‘s new era but the show has lured me back with the promise of expanding queer Muslim and queer South Asian representation (played by a queer actress, no less!) on television. I’ll be here to recap all the gay happenings of Season 5. — Natalie

Only Murders in the Building 205: “The Tell” 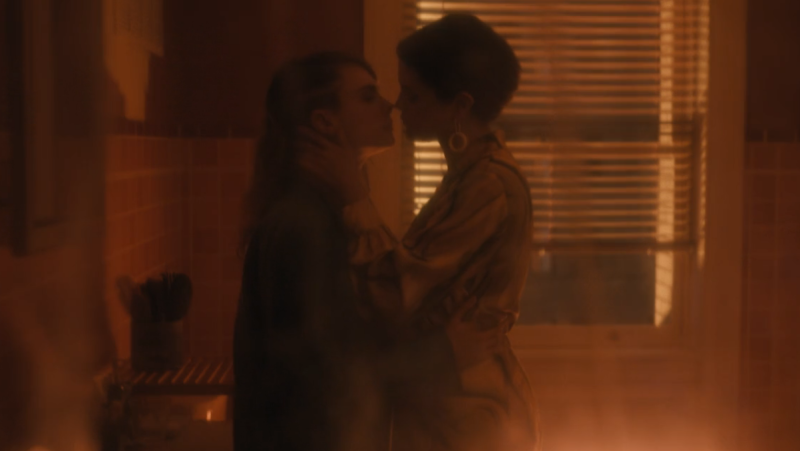 Alice is back, Alice is back! They start off chatting on the phone, Alice looking forlornly at the leak in her ceiling, Mabel wandering through the secret passages in the Arconia. Alice asks Mabel if she could maybe host the party at the Arcadia, and Mabel agrees because she just found the entrance from the secret passage into her apartment and she doesn’t exactly feel like being alone right now. She finds a matchbook from the diner with a splash of red on it, but it’s unclear whether it’s blood, ketchup, or paint.

Charles and Oliver have decided they need to look for a new factor in their lives who could be art-directing their framing…and Mabel just met an artsy stranger. Mabel waves them off and says Alice is just an “intimidatingly cool English girl” she’s dating. Charles takes a minute to process the word “dates” while Oliver teases him, saying it’s “hip” to be bisexual these days.

Alice’s party comes up and Mabel doesn’t invite them but, of course, they show up anyway. Alice immediately shmoozes Charles, talking about a rare Swedish film he was in, and he’s instantly charmed, but Oliver needs more convincing. In a half-70s-dream sequence, Oliver leads them in a murder mystery game he calls Son of Sam, and ends up interrogating Alice. She breaks down and confesses to lying, but about things like going to Oxford and her parents being artists. She created an art persona to gain legitimacy in the field, but that’s it. She holds up an “innocent blonde” card from the game and storms out. Mabel, feeling betrayed by people on both sides, follows her.

Mabel finds Alice and says she’s upset she lied but also knows she shouldn’t have been publicly humiliated like this. Alice says she got caught up in her art world lies and admits she should have come clean to Mabel and she apologizes. Mabel understands; she says everyone lies a little. Just the other night she lied about her Thai food not being too spicy. They agree not to lie to each other anymore, and they kiss and make up. But later, after they’ve fallen asleep in the same bed, we see that Alice did have the Son of Sam card. Maybe she’s not an innocent blonde after all… 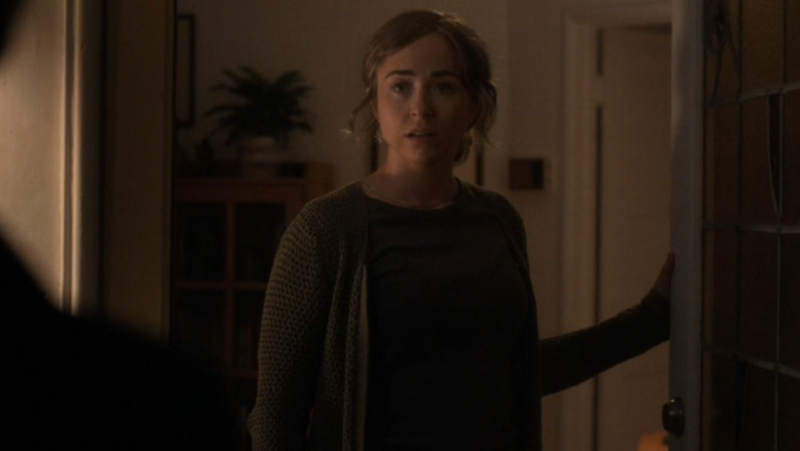 The First Gentleman is turning out to be no gentleman at all, being accused of shady dealings with NASA contracts and cheating on his wife with a member of the White House staff. Everyone is stressed about it, and honestly he’s mostly just relieved they don’t seem to know exactly who it is. He scolds his boyfriend for telling his college buddy about them and tells him to convince his friend he lied or was on drugs, even if he has to check into rehab to prove it. I wouldn’t call it a clean break, but it’s a break nonetheless.

Ellen is furious that he put their jobs in jeopardy after everything they’ve done to create this life. All he needed to do was keep it in his pants for one term, and he let her down. She asks what was so special about this particular Aide and all he can come up with is, “He likes me.” Ellen is furious and saying “For fuck’s sake” and frankly it’s hot. He says he’s tired of having to make sacrifices, and of the sacrifices the people in their lives have had to make. Ellen stops him when he mentions Pam; Pam dumped her for another woman, what sacrifices did she make? And then finally he confesses to the secret he’s been keeping for years: Pam didn’t dump her for another woman. He told her that Ellen would have to choose between the presidency and Pam, and would never not choose Pam, so Pam made the decision for her.

Ellen is crushed. Not only did they both lie to her, but they made decisions for her. So later that night, when she’s supposed to go to a fundraiser, she redirects her limo and goes to see Pam.

I have never been more excited for the next episode of this show as I am right now. I’m ready for Ellen and Pam to break my entire heart. 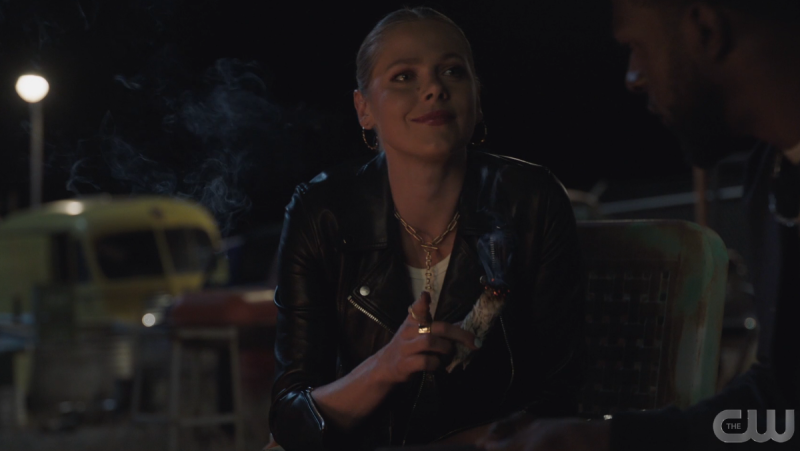 I really appreciate the leather jacket and sage combo, to really remind folks at home that even though her new love interest is a man she is still very much bisexual.

This week, Isobel wakes up naked next to Kyle in the bed margaritas made. She is afraid she ruined their friendship by rebounding with him, and he backs down about his feelings and she says she’s relieved he agrees it’s two friends blowing off steam. But eventually she decides it feels weird and she doesn’t want it to feel weird so she is going back to Roswell. Kyle asks her to stay and confesses his real feelings for her, and apparently she hasn’t been watching the same Kyle I’ve been watching because she is legitimately shocked by this news. She isn’t sure what to say, and he asks her to ask him to wait for her to figure things out, but she doesn’t want to promise him that waiting will be worth it. She doesn’t want him to have expectations. And she doesn’t want to lose him. She does end up going back to Roswell and uses her mind-powers for good instead of to manipulate her girlfriend.

In other queer news, Shivani and Allie are still saving the day together even though Allie is still off-screen, and Liz is still determined to find them the cure for their daughter they’ve been searching for. Also, Michael and Maria might be close to finally figuring out that Alex isn’t just out on a regular research project but is, in fact, missing. (Maybe even dead but, no body no crime. #MayaLives)

If you caught my caption last week or the discussion in the comments, there’s a cool Autostraddle tie-in to the latest episodes of The Chi: Fatima, a local reporter and potential love interest for Victor/Trig, is played by L’lerrét Jazelle, a former Autostraddle contributor. You love to see it!

This week, Fatima stops by the R.O.C.K., writer’s notebook in hand, to cover their “Follow Your Dreams” Day event. Victor’s there too, sporting fresh braids and wearing a dapper suit and cologne. He admits that he only stopped by because he’d heard she’d be there too. He asks her to leave with him and, though she declines at first, Fatima invites him to hang around until after she’s done covering the event. She finishes up and they head to a local Mexican restaurant to have lunch. Over margaritas, Fatima wonders at what point Victor will stop being a real person and “transition” into a politician. He acknowledges the pressure to be pristine but insists that he only wants voters to know that he’s not bullshiting them, like others have.

“Then why lie about who you are?” Fatima asks.

She leaves the specifics unsaid but Victor knows exactly what she’s asking. He leans back in his seat, ponders the question for a moment, and asks if they’re still off the record. He admits that his popularity has skyrocketed since he started posting pictures with Tierra. That’s no surprise to Fatima: “people love a cis, straight black couple,” she notes. Victor pushes back on the implication: he’s attracted to women — and “trans women are women,” he states firmly — and doesn’t that make him straight? I don’t like the impetus behind this conversation but I appreciate that it’s happening. Even for me, I worried about how Victor’s shift from Imani to Fatima, especially without a real glance in Tierra’s direction, would look to their audience.

Fatima pushes further: “When was the last time you were with a cis woman?”

Victor shifts uncomfortably under the glare of her question and admits that he doesn’t have an answer. He replies, “So what you call that? What’s the word for that?”

Fatima acknowledges that she doesn’t know either but continues to press Victor about his failure to publicly acknowledge his relationship with a transwoman. Victor admits that he’s keeping that part of his life secret because he doubts voters will embrace it but Fatima pushes him consider the bigger picture. His unwillingness to declare his love for the women that he loves erases them. He acknowledges her point but swallows his regrets, leaving me doubting that anything will truly change.

Fatima warns that, if Victor’s not honest, he will get caught eventually, but he doesn’t heed the warning. As they share a blunt outside Fatima’s apartment, things between the two get even more personal. Victor insists that she won’t be his secret but admits that he’s in a tough spot. Fatima assures Victor that he can trust her and she pulls him into a kiss.