The first sign that this particular episode of Good Trouble isn’t going to go well for our ‘ship comes during an ominous cold opening. Lucia’s Chief of Staff, Will, is performing a magic show, with Angelica and Lucia serving as his assistants. Malika is the trick’s volunteer, locked inside Will’s magic box. He takes out a blade and saws Malika in half. Angelica and Lucia pull apart the halves and Will bows to applause from the unseen crowd. But then the magician and his assistants blood dripping from the box…all the while, Malika’s still locked in the box, smiling brightly, blissfully unaware of what’s happened. 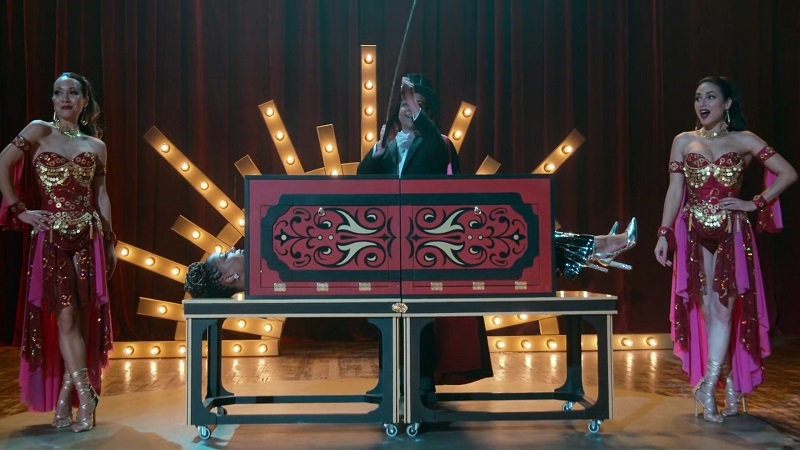 Yeah, I should’ve known: this is not going to go well.

Much like in the real world, municipal politics in Good Trouble‘s version of Los Angeles is consumed by the homelessness crisis. Will announces that the issue is Lucia’s chief concern and that the office is soliciting feedback from constituents about their biggest concerns are, related to the unhoused. He urges the staff to come up with some fresh and innovative ideas to address the issue.

In a private conversation with Lucia, however, her campaign manager, Dana, dismisses the idea of a survey outright, especially when the answer to what voters want is so obvious. Dana insists that Lucia’s entire campaign hinges on how she addresses (or fails to address, as the case maybe) the burgeoning crisis. She notes that the campaign’s already experiencing blowback over the encapment that’s in the middle of Lucia’s district. To her credit, Lucia pushes back. She notes that every unhoused person in her district is also a constituent and that they deserve to have their needs addressed as well. Lucia points out that while voters might be opposed to encampments, those same voters are resistant to the idea of sweeps (which, frankly, I wish were true). Dana urges her client to tread carefully and come up with a creative solution to the problem.

Malika catches up with Lucia as she’s making her way out of the office and offers her boss a new way of looking at the women’s center proposal. The idealistic staffer notes that there’s a lot of overlap between the issues faced by the unhoused and women impacted by incarceration. Perhaps, Malika suggests, the women’s center could be expanded to include a residential component. Lucia loves the idea and predicts that the inclusion of a housing solution would make the City Council more likely to approve funding. She compliments Malika’s work and promises to make some calls about the idea. She urges Malika to attend the office’s upcoming happy hour event to lobby the other Council staffers that might be there.

Everything sounds great until Lucia adds this gem, completely unprompted: “And I hope you’ll bring Angelica. I don’t want there to be any awkwardness between us.”

At this point, alarm bells are blaring — Danger Will Robinson! Danger! — and it’s obvious to me, even if Malika should go to this “Thirsty Thurs-yay” event out of a work obligation, she absolutely should not bring Angelica. Somehow, though, neither Malika nor Angelica recognize the warning sign for what it is because they both show up to the happy hour.

Angelica’s clearly a little awkward about the whole thing but she’s trying to swallow her feelings so that she can support Malika. Soon after they arrive, Lucia approaches and though the exes exchange pleasantries, the tension is thick. Lucia pivots and shares the latest news: there’s growing support on the Council for the women’s center with its new housing component. Lucia’s already identified a potential location for the center, a city-owned lot on 3rd and Temple, right in the middle of her district. Malika’s understandably elated and Lucia encourages her to talk up the proposal to other staffers.

After Lucia steps away, Malika notes that it’s the most excited that she’s ever seen her boss be about the women’s center. Angelica, however, is skeptical: she pours them both a glass of wine and then pours cold water all over Malika’s dreams (rhetorically speaking). Angelica wonders aloud what the catch is but Malika defends Lucia, insisting that her boss is just interested in doing something about the unhoused crisis.

Later, as Malika joins Lucia to talk up her proposal to a staffer from Councilman Amin’s office, Angelica watches from afar. Her misgivings about the alliance between her ex and her new girlfriend are obvious. Malika returns to her side and introduces Angelica to her co-worker, Tracy, who, unbeknownst to Malika, warned Angelica that she might be too idealistic for the political world. As they make small talk, Angelica spots Lucia across the room kissing someone else.

Once Tracy leaves, Lucia re-approaches, this time with her new love interest in tow. She introduces Malika (her “new star staffer”) to Beth, a city attorney, and reintroduces Beth to Angelica. The tension that’s permeated the room somehow manages to go thicker and Angelica shoots daggers in Lucia’s direction. If Lucia’s intention was to make Angelica jealous and want to come back to her, she has clearly misstepped and so she heads off to introduce Beth to everyone else. After Lucia’s out of earshot, Angelica asks to leave.

“If you’ve mingled enough, I’d like to leave,” Angelica spits. The anger in her voice is obvious but Malika’s oblivious to the cause. She asks her girlfriend if everything’s okay but Angelica refuses to offer any insight — at least not there — and instead just insists that she wants to go.

The tension from the party sticks with the couple as they make their way back to the Coterie. Malika asks again about what’s upsetting Angelica and she finally explains that Beth had been an issue in her past relationship with Lucia. Beth had inserted herself in their relationship — always hanging around, openly flirting with Lucia — and anytime Angelica brought it up, she was accused of being irrational. Malika insists on giving her boss the benefit of the doubt and suggests that, maybe, nothing was going on while she and Lucia were together. Angelica insists that the issue is the way Lucia gaslit her and claims that, clearly, Lucia only urged Malika to bring her to the happy hour to make her jealous.

It’s at this point that the fight that Malika and Angelica are having spirals out of control…like a snowball rolling down the hill, adding to its mass by collecting all these other issues that have gone unaddressed between them this season. A fight that started out about Lucia, turns into one that’s also about Angelica’s feelings about Malika being poly and about Malika’s feelings about Angelica dating other people and about Malika’s frustration — still lingering from her break-up with Dyonte — about not being supported. It all becomes a part of this snowball that threatens to destroy their relationship.

“Neither do I,” Malika responds.

“Me either!” I yell at my television at home.

Relationships have communication issues, I get that. Sometimes it just feels easier to avoid the hard conversations for fear of what having them might actually bring. I get that, I have done that, it totally makes sense. But I’m less sold on this particular couple having these communication issues. Angelica, in particular, has always shown a vested interest in having open and honest communication…until now. What’s more? It feels like all the relationships are Good Trouble are being thwarted by the same communication issue. Davia won’t have the conversation she needs to have with Dennis and Mariana and Evan just keep avoiding a conversation about their personal life. It just feels repetitive and juvenile. I can maybe understand it with the straights but the gays? C’mon…lesbian processing is an infamous stereotype for a reason.

Flabbergasted, Angelica decides that she needs some space so opts to head back to her place for the night. She pauses, as if she’s waiting for Malika to ask her to stay so that they can talk things out, but, of course, she doesn’t. Instead, Malika encourages Angelica to do what whatever she feels like she needs to do and watches — almost willing herself not to cry — as Angelica walks out.

The next day, as she’s walking into work, she’s greeted by a group of protesters calling for an end to the homeless encampment sweeps (#ServicesNotSweeps). Among the protesters? Luca, who introduces Malika to his friend, Nikki. She’s just received notice that the encampment where she lives is about to be swept. The location of the encampment? The vacant lot on 3rd and Temple, the site of Malika’s women’s center.

+ As someone who absolutely loathes political storylines because most shows get them very, very wrong (ahem, The Chi, Gen Q), I have to give kudos to Good Trouble who mostly gets it right? I can’t speak to Los Angeles’ particular political landscape but the minutaie of that kind of work environment feels very authentic.

+ The absolute highlight of this episode was the scene with Luca, Malika and Mariana in the Coterie bathroom. Three former foster kids who, somehow, all ended up here? It’s kinda magical. Their conversation revolves primarily around their outreach to their biological parents — which gave me some nice Fosters flashbacks — and both Malika and Mariana admitted that, in the long run, doing so was beneficial. I’d love to see more of these three talking about their experience as foster kids. 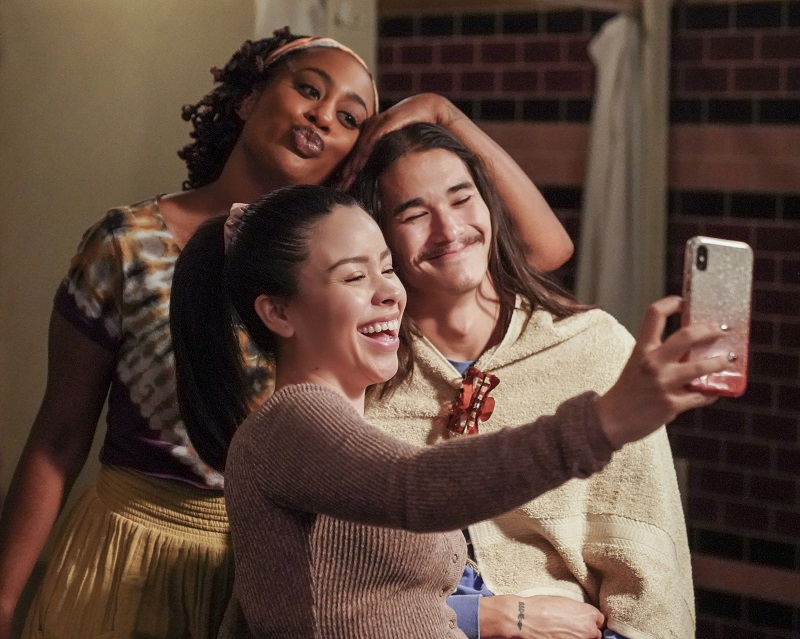 (Surely, though, if Luca ended up in the foster system, there’s a governmental record of him having existed somewhere, right?)

+ As Luca’s dropping his genetic testing kit in the mail with Davia, the guy that’s been hunting him, Ivan, spots him. Now he knows where Luca’s staying and I’m worried about everyone’s safety. Personally, though, I’m ready to fly to LA and protect Luca at all costs.

Next Week: Famous Last Words: “I think we need to talk”