In Good Trouble‘s season opener, we catch a glimpse of Malika rushing off for her first day at her new job in City Councilwoman Lucia Morales’ office. She starts and ends her day with flowers from her partners, Dyonte and Angelica, but the remainder of the episode is focused on Malika ending her relationship with Isaac. But this week, we get to revisit Malika’s few days in her new gig…when she recounts all the days’ events to Angelica.

As someone who’s worked in and around politics, I’m generally pretty critical of political stories on television (recall my dismay at the awful campaign storyline from Gen Q‘s first season). It’s hard not to be frustrated by the portrayals which feed into the public’s misunderstanding about the work political staffers do. I imagine what it’s like when doctors watch Grey’s Anatomy or lawyers watch Law & Order or when Riese or Kayla watched the happenings at Scarlet magazine on The Bold Type. But, to Good Trouble‘s great credit, they depict the first day experience of a new political staffer as true to form as I’ve ever seen on television: it’s lousy. 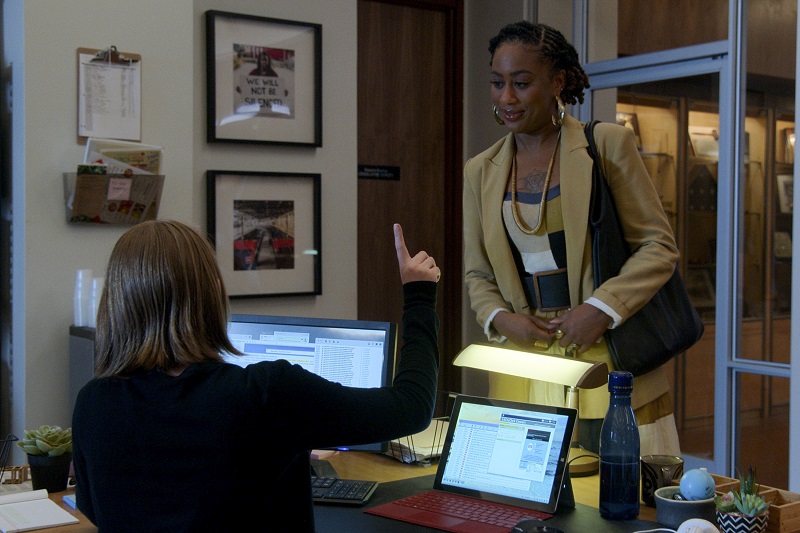 After spending hours trying to pick out the right outfit, Malika makes her way to the office, eager to start her day. The first two people she encounters are consumed by their own work loads and point Malika in the direction of Will, Lucia’s Chief of Staff. He, who vaguely remembers her resume from when it crossed his desk, pawns her off on another staffer, Tracy. Unlike Malika, Tracy doesn’t believe in government’s capacity to make change. Tracy’s just here for the good benefits, the holidays off and the job security. She explains that Malika will likely have to deal with a lot of angry callers but just placate them as much as she can and then get them off the line. On the one hand, Tracy appears too young to be this grizzled…but also, yeah…that tracks.

“I just thought that since Lucia sought me out to work at her office that she would be the one to show me around. It’s like you need a VIP wristband just to say good morning,” Malika laments.

Malika asks Angelica about how to get Lucia’s attention but Angelica admits that she’s probably not the best person to ask about that: after all, it’s the reason they broke up. During their relationship, it was hard to get Lucia to focus on anything but work and — thank goodness — Malika recognizes that she’s doing the same thing. She leans in and kisses Angelica but just when I think things are about to heat up, Malika pivots back to talking about work.

Back in the office, Will updates the staff on Lucia’s legislative priority: funding their families first initiative. Concerns over the expansion of rent control have stymied the initiative’s progress so Will encourages the staff to research the issue and produce a persuasive brief. Malika questions Will about her proposal regarding support for formerly incarcerated women but he insists they focus all their efforts on Lucia’s initiative. 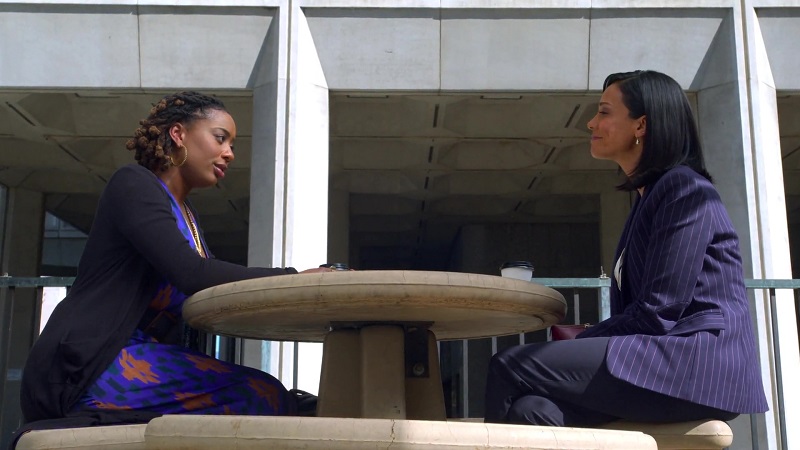 Enter Dana, the manager of Lucia’s re-election campaign, who invites Malika out for coffee. Tracy advised Malika to stay out of Dana’s crosshairs so she eagerly accepts the invitation. Dana dispenses with pleasantries and questions why Malika left activism to work in politics. Malika responds that working in government offers access to financial resources and power to make change in people’s lives. Dana’s done her homework — volunteering information about Malika’s brief before the new staffer can mention it — and offers Malika some advice: find out what Will wants, get it for him and, in turn, Malika can get what she wants. The advice doesn’t come for free, though. Dana assures that she’ll be an ally to Malika as long as Malika is a an ally to her. In reality, most people aren’t quite that candid about their embrace of quid pro quo…but otherwise, that tracks.

Malika learns how to play the game quickly, passing on a heads up about the rent control provision to some housing activists. The next day, those activists show up en masse and compel Lucia to add the expansion of rent control back to the initiative. Malika mentions her hand in the day’s protest coming together — because it was so important to Will — and soon thereafter, he e-mails Malika’s proposal to Lucia and she finally gets some facetime with her new boss.

As she recounts the events to Angelica, Malika notices her eyes glaze over. She apologizes for talking about work so much but Angelica assures Malika that she wants to hear it all. Understandably, though, talking about her ex-girlfriend constantly is killing the vibe between them. Malika understands and thanks Angelica for her honesty. Since she’s being candid, Angelica pushes the conversation further: where does Malika think things are going with them? Malika confesses that she “like likes” her a lot and then she takes Angelica back to her loft to show her exactly how much. 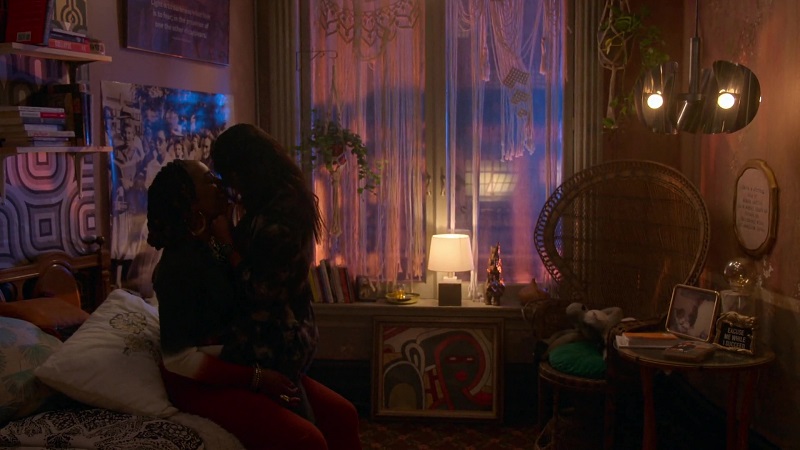 Malika: I think I’ve been taking it slow because I’ve never been with a woman before. I’m just…not…exactly sure what to do.
Angelica: All you have to do whatever feels good and right for you.
Malika: I think I might need you to take the lead.
Angelica: I can do that. I need you to tell me if we’re going too fast…and then we can slow down.

Angelica kisses Malika’s exposed skin and asks if what she’s doing feels good. The music is sultry, the women are hot, the scene is sexy AF…and then it cuts off abruptly…only to immediately flash to a shot of a Bible?! It was an odd juxtaposition, one that I found jarring and that ruined an otherwise beautiful moment.

+ Still reeling from Callie’s departure, Mariana starts at Revitalize Beauty, hoping to prove that Bulk Beauty’s source code was stolen to create it. She’s thwarted in her efforts, though, by Nia Nal (AKA Nicole Maines), who says she has to sign an non-disclosure agreement (with a two year long non-compete clause) in order to view any proprietary material. Mariana holds off on signing it for as long as she can but when she and the Bulk Beauty girls get a look at the source code (using a stolen password), they realize they can’t fight Revitalize and the Hallis Group in a copyright claim. And while most people would admit defeat and retreat, Mariana refuses — blaming herself for the idea being stolen in the first place — and signs the NDA with a promise to funnel information back to Bulk Beauty.

Mariana, honey, WHAT ARE YOU DOING?! I hope you’ve still got Kathleen’s number because you’re gonna need a lawyer when they arrest you for corporate espionage.

+ Davia gets fired from her teaching job when the wrong student stumbles upon her “Fat Bitch” video. I’m a little surprised that there’s not more of an effort to help — by her students or fellow teachers — to compel the administration to change its mind (particularly given a massive nationwide teacher shortage).

+ For a show like Good Trouble that sometimes struggles with trying to tell too much story at once, Callie’s departure and Alice’s tour should’ve been seen as an opportunity…a chance for the show to deepen its storytelling and develop the more ancillary characters (Sumi and Kelly, most notably). But instead of doing that, they’ve shoehorned in this disappearance story that doesn’t fit the tone of the show and features a character we barely know. In the comments last week, @Emdee said it was giving season six of The L Word vibes and, honestly, I can’t think of a better description.

(Also? I love that multiple commenters have just referred to Joaquin as Morgan Corinthos. I have truly found my people.)