The moment I realized I wanted to have a baby, I was also coming to terms with the fact that I am transgender. I had just changed my name and started using gender-neutral pronouns, and the possibilities of who I could become were overwhelming. I couldn’t stop thinking about starting Hormone Replacement Therapy (HRT). Everything was new to me: the language around being nonbinary, how testosterone actually changed a body, the thought of living past my twenties.

I called a local clinic and quietly asked if they had any doctors accepting new patients. When they asked me why I needed to schedule an appointment, my throat became an empty church—my sins exposed. I thought, going into that appointment, that I was certain about starting testosterone. But, when my doctor recommended I also find a back up birth control method like an IUD, I realized how much I had been holding onto the desire to have a baby.

Existing as a person who wants to have a baby in a world where the representation of pregnancy is mostly for cis women is exhausting. My community then was rock climbers and yoga teachers. Not the most trans-inclusive (or aware) groups of people. I didn’t know who to turn to for support with my unique experience of both wanting to transition and have a baby. 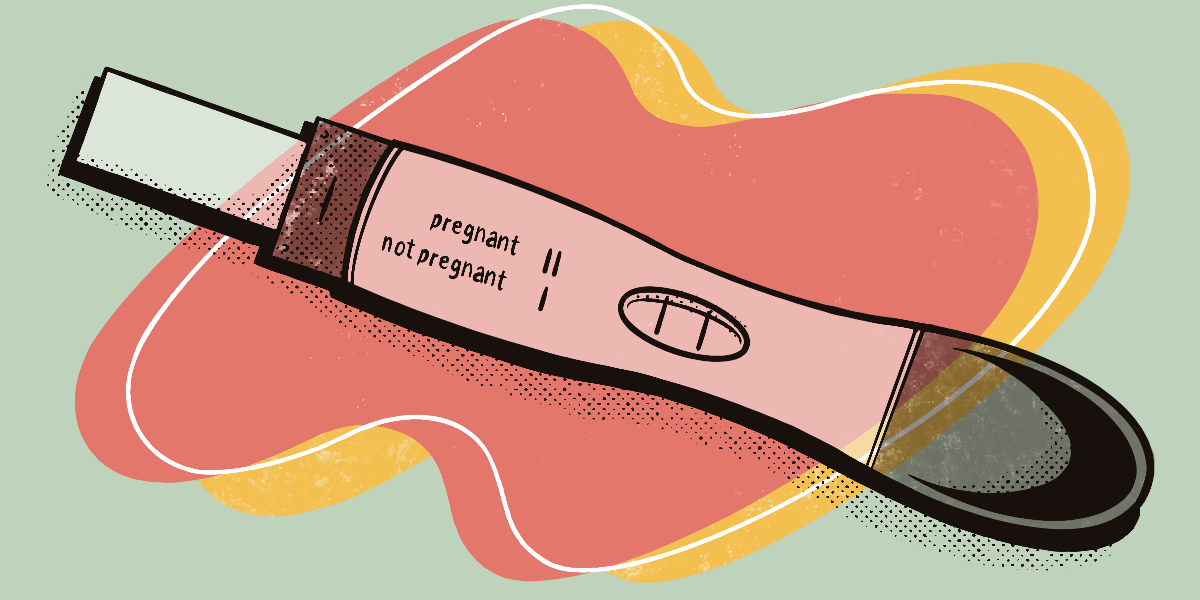 I decided to wait to medically transition. Sometimes I think I waited out of fear of what the people in my life would think of me. For years, I preached self-love and acceptance, exactly the way you were. I didn’t realize how much I needed to physically change before I could love myself.

A year into my decision to wait, the pandemic reached the United States. Days later, I got a positive pregnancy result. I remember watching myself pee on the stick, astral projecting into the tiny studio apartment bathroom where the clawfoot tub took up most of the space. I saw the range of emotions play on my face: fear, excitement, the idea that this meant I could have a baby and then transition.

Having a baby was by far one of the most badass and amazing things I’ve done in my life, but I did it all with a body that didn’t feel like mine. Pregnancy was rough. My body was changing at a rate most people would be uncomfortable with. I would stand in front of the full-length mirror in my bedroom and stare from every angle. At my chest that wouldn’t flatten anymore. At my stomach that I secretly hoped people saw as a beer belly. At my hips widening, possibly forever.

My mom used to complain that having four kids ruined her body—her reason for getting a breast augmentation. My entire pregnancy I thought about the possibility that having a baby would completely deflate my chest. I hoped.

When it was time to give birth, I once again watched from the outside. I stood by the hospital bed, watching this other person push for three hours, incapable of opening their eyes. I whispered promises to this rented body: the sooner they are out, the sooner you can begin your own life.

My baby was born on January 6th, 2021. My partner and I stared at the freshness of this new living, breathing being. Hours after delivery, my doctor came in to check on us. “Well,” she sighed, “Democracy has failed us today.” We turned on our phones for the first time, abruptly losing the moment we’d waited nine months for, to see the white supremacist insurrection at the Capitol. Being a parent has been an overwhelming amount of feeling guilty. My therapist asks what I’m feeling guilty about and I recite: for letting my kid watch TV sometimes, for feeding them french fries, for bringing them into a world that is full of violence and climate catastrophe.

Following my doctor was the lactation consultant. She asked how I was feeling about breastfeeding, how the baby was latching. There had been no issues so far, and it was nice to feel like my chest had a job. But I knew I didn’t want this to be long term. I wanted to chestfeed for three to six months, but the lactation consultant pushed for a full year, and I didn’t want to deprive my baby of something that seemed so urgently necessary for their health.

As the months went on, I found myself dreading feeding sessions. I knew that weaning was a possibility, there was always formula, but everyone kept telling me how great I was doing, feeding them only my milk. I once again bought into the rhetoric of there being just one good way to have a baby. Around six months in, the depression and thoughts of self-harm were taking over my every breath. I knew my medical transition couldn’t be paused for much longer.

Finally, I would begin the process of weaning my baby off so that I could begin my own growth. It happened when they were 10 months old. I began testosterone on my 27th birthday, almost a year after giving birth. I wish it had been sooner. I wish I had started transitioning before I even got pregnant, so that I could have gone through pregnancy more comfortable in my weird body. I wish it was me giving birth that day.

Having a baby was by far one of the most badass and amazing things I’ve done in my life, but I did it all with a body that didn’t feel like mine.

Since starting testosterone, everything has changed. The cloud of dysphoria is beginning to clear. Despite the new challenges that come with a second puberty in my late twenties, getting up in the morning is no longer an act of resilience. I’ve been exploring my sexuality in a completely new way—where I used to avoid touch, I now lean into comfortably. I am starting to understand my body. Communicating my needs and desires to my partner has been a revelation, and the possibilities we can now discover together have invigorated a relationship where I’ve mostly felt absent. In the mirror, I recognize myself looking back. When I move, touch, breathe, I feel it happening in my body and my mind. I’m no longer watching myself exist, but coming into an existence of my own.

I don’t regret my choices around medically transitioning, but knowing now what I didn’t know then, I never would have waited. Transitioning has allowed me to prioritize my own mental health, something that pregnancy and parenting often kicks to the side. I’ve found empowerment through putting myself first, so that I can have the confidence to show up as a parent and a partner.

My therapist asks what I’m proud of, and I say, I’m proud that my kid can see someone every day who isn’t afraid of being the truest version of themselves.

Sage has written 1 article for us.