This review of Ruby Rose’s 1Up contains mild spoilers, but it truly doesn’t matter.

I’m sure Ruby Rose is great at a whole lot of stuff. They were a presenter on MTV Australia, a VJ back when that was a thing. They even won some awards for it. They were an international model. They did a really sexy wink in Orange Is the New Black one time that set the entire gay internet’s loins on fire. They seem to have a lot of cool sneakers. Yes, I feel very sure that Ruby Rose is good at many things — but acting is not one of those things.

And there. I said it. Someone had to. I guess it had to be me because Ruby Rose keeps getting cast in queer nerd movies and TV shows that would otherwise be catnip to me, and making them nearly unwatchable. Amazon Studios’ 1Up, a GamerGate comedy directed by Kyle Newman and written by Julia Yorks, is the latest in this dorky trend that I should be feasting on, but am instead starving about. 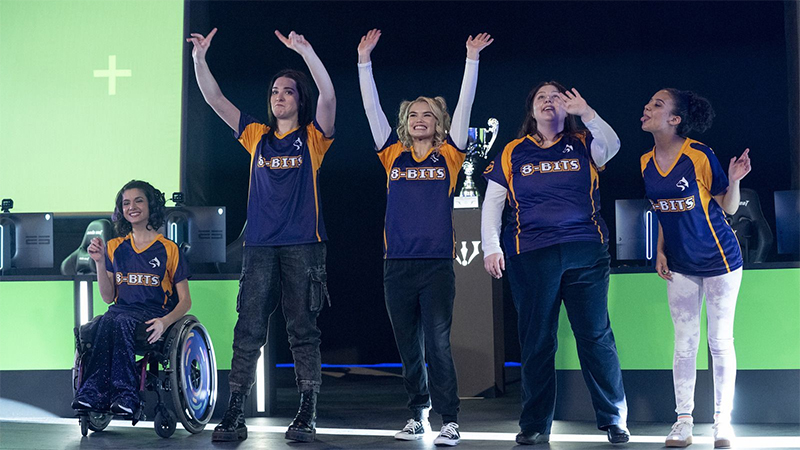 The premise of 1Up seems rad: Vivian (Paris Berelc), known to her friends as V, lands an esports gaming scholarship to her local college, much to her parents’ chagrin. Her best friend, Sloane (Hari Nef), a cheerful lifelong gamer who can recite the original Contra Konami Code (up up down down left right left right B A start) from heart, is also on the team. Unfortunately so are a whole lot of sexist pricks who act like basically every cis dude gamer you’ve ever seen or heard of. And so V and Sloane decide to quit and make their own all-girls team. They call themselves the 8-Bits and they’re meant to represent the wide swath of women gamers who keep their microphones on mute. You know, one (1) disabled gamer, one (1) trans gamer, one (1) fat gamer, one (1) POC gamer. A pick n’ mix (limit one, each). They have to win for V to keep her scholarship, which means they need a coach who knows what they’re doing, so they recruit Parker, their Video Game History teacher, played by Rose (in a role originally meant for Elliot Page, before he came out).

There’s Dodgeball-style training montages, Pitch Perfect-esque bonding montages, and plenty of gamer deep dives. Like: Konami’s TMNT: Super Kame Ninja really is the best team coin-op game of all time! Also: There’s a scene where Hari Neff is sitting in a chair surrounded by other women and retro coin-op cabinet games, playing her Nintendo Switch, while her pals cheer “Go Timmy! Go Tommy!” at Tom Nook’s rascally little crooked raccoon nephews in Animal Crossing. That alone should have kept me spellbound for at least two hours. Alas. Ruby Rose smashes through my heart-eyed stupor by clomping out into the snow in a leather jacket and boots, emoting so incomprehensibly the writers had to add a line where the main character yells, “You’re drunk!”

They’re not drunk! They’re just acting! The creative team even let them keep their Australian accent, but it didn’t help! 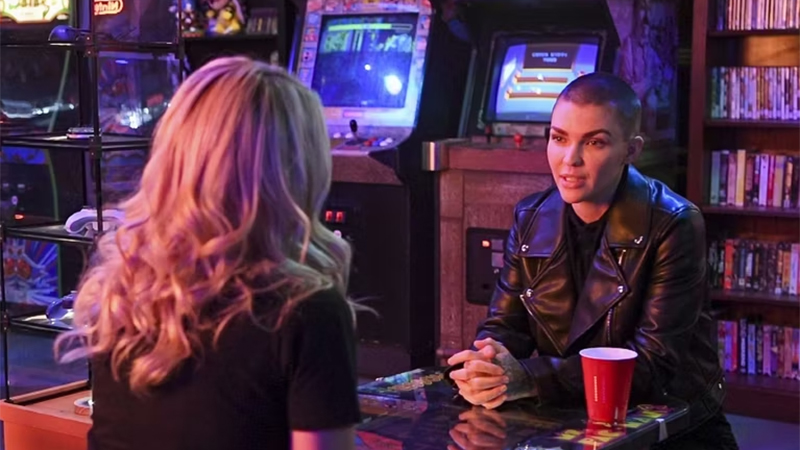 There’s plenty of things that make 1Up a mess. The script reads like an early draft of an Ernst Cline novel, with mile-a-minute nerd references that are meant to cover the thin ready-bake stereotypes that make up the 8-Bits. You know: Party Girl, Girls’ Girl, Weird Girl, Girl Who’s One of the Boys, etc. Also, for a character originally conceived for one of the best queer actors of our generation, Parker’s whole deal is nonsense. She apparently did something? Or something happened to her? Or she got doxxed? She was a successful game developer, and now she’s broke and teaching at a junior college? And in the aforementioned snow emote, she pleads with V not to push her teammates away because she’ll end up playing Ms. Pac-Man alone in her garage, just like her! But there’s never any real information on how she ended up alone. Or why she has a kid who has no Australian accent. Or why she’s dressed like that when she doesn’t even own a motorcycle. The “raunchy” humor that gives the film its R rating is also just juvenile and gross.

And because everything leading up to the BIG COMPETITION falls flat, so does the ULTIMATE VICTORY.

I want to love all girl nerd movies, all gay movies, and especially all movies that are getting review bombed by actual GamerGaters. I can count on two hands the numbers of bad reviews I’ve written in my 15-year career. But 1Up is just so terrible! You should skip it and read A.E. Osworth‘s We Are Watching Eliza Bright instead — and then fully cleanse your pallet with your own personal getaway to Tom Nook’s island paradise. Yes, yes.