In his fifth State of the Union address Tuesday night, President Barack Obama set the tone for a year of strength from his office. Executive power, rather than legislative, is clearly the president’s intention for 2014. He told us again and again how he would, wherever possible, bypass the gridlocked Congress to enact change, even delivering a presidential order to raise the minimum wage for federal workers to $10.10. He announced intentions to close the prison at Guantanamo Bay by the end of the year. He called out those (mostly Republican) politicians who made 2013 the year of gridlock, fear and grandstanding, rather than progress and cooperative action he called for in his last SOTU address. He laid out a few key issues he plans to address with or without Congress’s help, including early education, job creation, the gender pay gap and healthcare, promising ” a breakthrough year for America.” You can read the full text of the speech here and watch the video below. 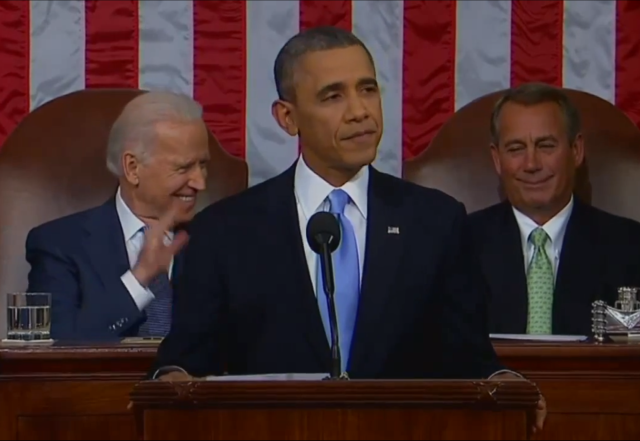 If all goes according to his plan (and it very well may not) this will be a year of leaps and bounds for many of the Americans who felt left behind in 2013. Women, people of color and those living in poverty all received direct attention in this speech, to name a few. The president specifically called out income inequality, following through on an earlier executive order to change the minimum wage for federal workers to $10.10 and calling on Congress to work with Democratic senators’ plan to set the nationwide minimum to the same amount. That Senate proposal, by the way, would  lift millions of Americans out of poverty. Obama also called for the reinstatement of unemployment insurance benefits that expired last month, leaving families whose members lose their jobs suddenly without one of the best proven lifelines. He announced a new plan to help Americans create public retirement savings accounts that could help ease the retirement crisis. “The cold, hard fact is that even in the midst of recovery, too many Americans are working more than ever just to get by – let alone get ahead,” he said. To help us get ahead, he’s pledged to give us whatever tools are possible without legislative action.

Women were a huge focus of the night, from discussions of healthcare to workplace inequality to business growth. Early education, technology innovation, booming industry, medical insurance — they pretty much all came back to women who, whether they work or raise families or devote themselves to something else altogether, deserve to be backed by the rest of the nation. He featured as many female guests as males among his personal anecdotes, and even generic examples of progress like referencing “an entrepreneur [who] flipped on the lights in her tech startup” emphasized female strength throughout the country. And given recent confusion over what we mean when we talk about the “war on women,” the president’s insistence that women are people fully deserving of the same opportunities as men was a good reminder that not all our politicians are against us.  It shouldn’t be a bold move, but it certainly felt like one.

As for healthcare, Obama’s biggest political effort so far was an opportunity both to chide his opponents for attempting dozens of repeals of the act and to plug the fledgling system with the group he thinks most likely to use it: young Americans. “Kids, call your mom and walk her through the application,” he said. “It will give her some peace of mind – plus, she’ll appreciate hearing from you.” The battle over Obamacare is not over, but maybe some politicians will follow in the president’s example in focusing on actionable issues with the system, like the website or confusion over keeping existing plans, rather than trying to repeal the law for the 41st time.

There was one thing that bothered me throughout the address and continues to irk me now as I look back at the transcript. So many of the important issues Obama called out, including gender, immigration, unemployment and healthcare, intersect with queerness in very powerful ways. We’ve written about how workplace discrimination, joblessness, homelessness, violence and more hit LGBTQ Americans, who often the lack familial support or monetary resources to get by until their luck changes, particularly hard. Recognition of that fact by the president of our nation, particularly in the speech meant to set the coming year’s priorities, would have leant so much heft to efforts to combat those issues. Even a celebration of the year’s various victories, like the gutting of the Defense of Marriage Act, the death of California’s Prop 8, the securing of marriage equality in seven new states and unprecedented progress for a more inclusive Employment Nondiscrimination Act, would have been an appreciated nod to the particular struggles of a subset of Americans. It would have cemented the support he’s verbalized on many previous occasions.

As in all things, however, we must look not only at what has been said, but also at what may be done. After a year of frustration, it was refreshing to see the president reminding us what he could do without our ever-gridlocked legislative bodies. He actually looked fresher and more energetic than he did during much of what has been called the weakest year of his presidency. He made promises to combat inequality by improving the resources available to those at the bottom of the wealth ladder, even if those at the top refuse to relinquish their surplus. He reminded us again and again that women aren’t just a subset of American society but rather a central component of it. He reaffirmed his promise to military families that he wouldn’t send their soldier out to fight in any more never-ending wars. He called on the nation’s leaders to set aside endless partisan battles and “say what we’re for, not just what we’re against.” If the president is able to do even half of the things he has promised, we’ll be a great deal further along in the right direction.