Moore and Pocan hope to pass the bill as part of the Runaway and Homeless Youth Act, which has existed in various iterations since 1974 and is up for reauthorization again this year. RHYA awards grants to public and private organizations assisting homeless youth. It funds safe places for homeless youth to stay, homelessness prevention and family reunification support, and social services to connect young adults with jobs and housing of their own. Yet, despite the fact that LGBT youth comprise a disproportionate amount of the youth homeless population, RHYA currently does not contain language or requirements to specifically protect this vulnerable population. 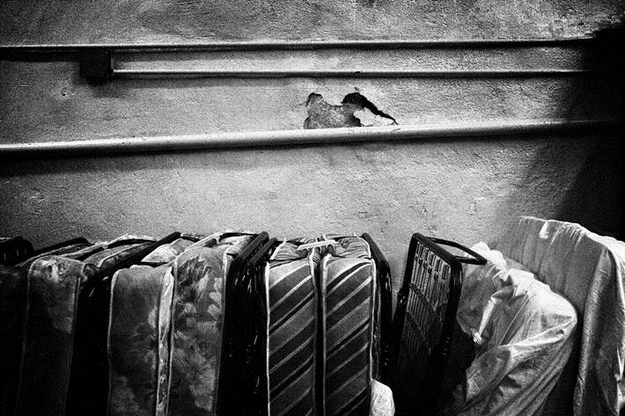 The residents’ beds in Sylvia’s Place, an emergency shelter for LGBT youth in New York City. Samantha Box
via Buzzfeed, 2006.

Nationwide, between 20% and 40% of homeless youth are LGBT identified, despite the fact that only about 6% of all youth are LGBT. “LGBT youth are much more likely to be homeless because of parental rejection,” explained Carl Siciliano, founder of the nation’s largest organization dedicated to homeless LGBT youth, the Ali Forney Center. Although it is illegal for parents to abandon children under 18, the sad truth is that hundreds of thousands face the streets every night. Of these, LGBT youth are eight times more likely to be homeless than their non-LGBT peers.

“I think we have to recognize parental rejection and the way in which it makes young people destitute as one of the fundamental expressions of homophobia – and one of the fundamental ways in which young people are hurt by homophobia – in our time,” said Siciliano. Noting the LGBT movement’s recent focus on legal battles over marriage equality, acceptance in the military, and adoption rights, he said, “There are things that you can do with the law, but you can’t legislate love. You know? You can’t legislate people into loving their kids. And that’s why I think that there’s an equal responsibility to make sure in the community that we create a safety net to protect our kids. That’s where I think that our movement has lagged.” As Siciliano pointed out, LGBT homeless youth were the ones that started the riots at Stonewall. Now, after benefiting from their progressive stances, the movement seems to be leaving these youth behind. 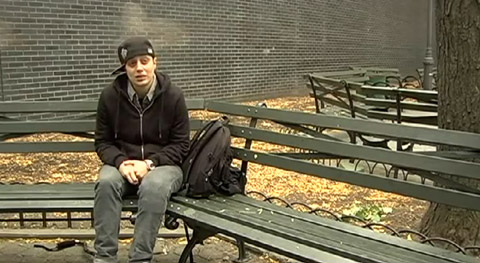 Tiffany “Life” Cocco on a bench that she slept on after becoming homeless. Image via “A Day In Our Shoes,” a short film about the LGBT homeless youth.

Once youth are kicked out of their homes, living without shelter or adult protection leaves them vulnerable to abuse, exploitation and criminal activity. In an attempt to meet basic needs, many engage in survival sex (trading sex for shelter, food, money, etc.) or get involved in the drug trade. Ali Forney, the individual Siciliano named the center after, was murdered in the street.

Even when LGBT youths connect with homeless shelters, they are not always safe. As American Progress explains, “Gay youth are 10 times more likely to be sexually abused or experience staff sexual misconduct than their heterosexual counterparts. Transgender youth are at increased risk of physical abuse when forced to use showers of their birth gender. And a majority of professional staff at shelters and group homes report feeling that gay and transgender youth are not safe in these settings. Many homeless gay and transgender youth even find themselves in shelters that try to convert them or use ‘reparative therapies’ to change their sexual orientation or gender identity.” For this reason, many LGBT youth wind up back on the street, or even attempt suicide.

“We have a kid that has been staying with us recently who was from Houston, Texas,” said Siciliano. “When his mother said that she would rather be dead than have a gay son, and that she hoped he died of AIDs, he ran away. He was homeless in the park for a couple weeks, and when he finally went to [the shelter], he was made to go to a religion class where the teacher would point him out to the rest of the class and say that he was gay and he was possessed by demons.”

If Moore and Pocan’s bill passes, this situation would no longer be allowed in shelters receiving federal funding — obviously, a positive move for LGBT homeless youth. As Siciliano pointed out, however, the majority are never even accepted into a shelter. 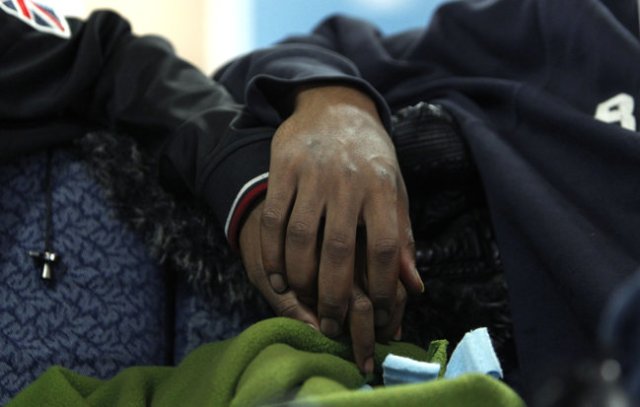 Two boys hold hands at the Ruth Ellis Center in Detroit, the only nonprofit agency in the Midwest that focuses on LGBT youths. It has 10 beds.
AP Photo by Paul Sancy, 2012.

“I think any effort to make the youth shelters safer is great. I heartily support the amendment. But having said that, I think the fundamental issue in our country is that we’re not willing to provide shelter to homeless youth,” said Siciliano. Conservatively, he estimates that about 500,000 youth experienced homelessness for at least one night, but only about 50,000 of them were able to be cared for by the homeless youth service systems. In New York City, there are an estimated 3,800 homeless youth, yet only 250 youth shelter beds; 1,600 spend the night outside, in an abandoned building, at a transportation site or in a car, bus, train or some other vehicle, and an estimated 150 spend the night with a sex work client. Siciliano says the Ali Forney Center alone sees a waiting list of 200+ people each night.

“There’s only enough shelter to accommodate one out of every 10 homeless kids in this country. And that’s a nightmare for LGBT youth and for all homeless youth,” said Siciliano. “As much as I’m grateful to see any effort to see the service infrastructure safer and more accommodating for LGBT youth, I don’t think that it’s appropriate to just sit back and say okay, well that’s all we need to do.”

RHYA is currently the sole federal law targeted to unaccompanied youth. H.R.2955, the amendment proposed by Moore and Pocan, has been referred to the “House Education and the Workforce” committee for consideration before it goes to the Senate and the House. As of today, there are another 56 days in session until this congressional session is over.

For resources on how to get involved, check out the Ali Forney Center (New York), Ruth Ellis Center (Michigan), or Halsted (Illinois).