President Barack Obama signed an executive order this morning that prohibits discrimination against LGBT employees and potential hires by any company that receives a federal contract. Today’s move affects about 20% of the nation’s workforce — some 28 million people work for companies with government contracts, and over half of those work for companies or in states without such protections. The Labor Department will carry out the order, which will probably go into effect early next year.

Obama also signed an executive order that prohibits federal employers from discriminating based on gender identity. That order applies as of today. Obama did not include exemptions for religious groups in either order, despite heavy pressure to do so from evangelical leaders.

In the announcement before the signing, Obama put it simply: “America’s federal contracts should not subsidize discrimination against the American people.” And that includes contracts that go to religiously affiliated companies and organizations like hospitals and international relief organizations. In 2002, President George W. Bush added an exemption to federal employment non-discrimination law that allows religious organizations and churches to consider an applicant’s faith while making hiring decisions. That exemption stands in Obama’s executive order.

Progressive faith leaders stood together and urged Obama not to include the broad religious exemptions. They join gay rights groups in celebrating today.

“As people of faith, we believe that every human being is created in the image of God and has sacred worth. A growing multifaith movement of religious leaders is helping the faithful understand how religious teachings and texts compel acceptance — not rejection — of LGBT people,” said Dr. Katharine Henderson, the president of Auburn Theological Seminary and one of more than 100 faith leaders who signed a letter to Obama against the possible exemption.

But leaders like Henderson haven’t convinced their more conservative counterparts, and the conversation isn’t over. From the New York Times:

Galen Carey, the vice president of government relations for the National Association of Evangelicals, said he expected the president’s executive order would lead to a lengthy and expensive legal fight.

“It would be better if the president could provide leadership that promotes tolerance all the way around,” Mr. Carey said, “rather than use the force of the state.”

He said the exemption would have protected the groups’ freedom and “social harmony as our nation is working through these issues, on which there’s a lot of disagreement.”

Concerns remain that the Hobby Lobby ruling leaves the door open for religious groups to appeal for exemptions to laws that extend basic rights to women, queers and other groups. And the order is not as complete as the Employment Non-Descrimination Act. Obama opted for an executive order because the House refused to take up that bill, but his order can only affect federal employees, leaving millions of people at risk for firing because of their sexuality and gender identity. Rev. Nancy Wilson, the global moderator of the Metropolitan Community Churches, says she and other faith leaders will keep fighting to extend workplace fairness to all LGBT people.

“Today, about 20% of the U.S. workforce can breathe easier knowing their jobs are not dependent on hiding who they love or their perceived or actual gender identity,” Wilson said.  “As the leader of Metropolitan Community Churches with congregations across the United States and in 40 countries, we rejoice when leaders apply protections to citizens. We pray that Congress will soon go beyond just federally-funded programs to pass an Employment Non-Discrimination Act with no religious exemptions so everyone in this country can go to work without fear of losing their job because of their perceived or actual sexual orientation or gender identity.” 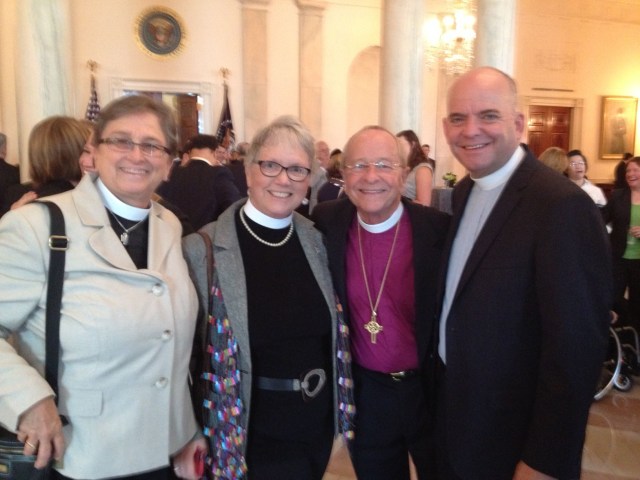 Queer and progressive faith leaders applauded Obama’s executive order today, including his decision not to include a religious exemption. From left: Nancy Wilson, Susan Russell, Bishop Robinson and Harry Knox

But for today, it’s powerful to see the president taking a decisive stand in favor of LGBT rights despite a Congress and, largely, a culture that remain resistant.