On July 15th, the U.S. Department of Justice Civil Rights Division issued a “Best Practices Guide to Reform HIV-Specific Criminal Laws to Align with Scientifically-Supported Factors” as a measure to encourage state lawmakers to examine laws that target HIV-positive individuals who engage in specific behaviors without first disclosing their HIV-status. The Department of Justice’s guide also advises state lawmakers to eliminate any laws that may prove obsolete. As various states prepare to analyze their criminal laws, here’s a quick breakdown of the relationship between HIV and the law in the United States.

1. The vast majority of states have HIV-specific laws

From the onset of the HIV epidemic in the early 1980s, state governments began developing treatment programs and campaigns to decrease the transmission of the sexually transmitted virus. However, in their efforts to control the epidemic, state governments also began instituting laws that would punish individuals who transmitted HIV to another person. In 1986, Florida, Tennessee, and Washington were the first states to implement HIV-specific criminal laws. Four years later, in 1990, the Ryan White Comprehensive AIDS Resources Emergency (CARE) Act, which funds states for AIDS treatment and care, required every state to certify that its criminals laws adequately could prosecute any individual with HIV who knowingly exposed another person to the virus. By 2011, 67 HIV-specific laws had been enacted and 33 states had one or more of those laws.

A map of the states with HIV-specific laws
via ThinkProgress

2. Many HIV-specific laws are outdated

Remember how I said that some negligible behaviors like biting, spitting, throwing bodily fluids, or mutual masturbation can be terms for prosecution under HIV-specific laws? Well, we know in 2014 that spitting on someone won’t transmit HIV, but when healthcare professionals first began diagnosing people with HIV, even officials had limited knowledge about how the virus spread. Given that we know a lot more about HIV and even AIDS in the 21st century, it does not make sense that these HIV-specific laws don’t even incorporate modern information. Also, in spite of the fact that there are more options for and that more people have access to safer sex methods, condoms and other items for sexual protection are rarely viable as a defense during prosecution. These laws also don’t take into consideration HIV prevention measures that decrease the chances for transmission like antiretroviral therapy (ART), or pre-exposure prophylaxis (PrEP). Even the federal government is suggesting now that it is completely unhelpful to base HIV-specific laws on outdated information. Acting Assistant Attorney General Jocelyn Samuels for the Civil Rights Division admitted, when discussing the Department of Justice’s new guide, “While initially well intentioned, these laws often run counter to current scientific evidence about routes of HIV transmission, and may run counter to our best public health practices for prevention and treatment of HIV.”

According to the Center for HIV Law and Policy’s Positive Justice Project, “HIV exposure laws are applied unfairly and selectively, targeting those who are socially and economically marginalized, such as sex workers, while those with other STIs or infectious diseases are not targeted.” Poor people, LGBQ people, people of color, and especially trans people living with HIV, who already generally face increased discrimination under the law, are prosecuted more frequently. Moreover, the harsh sentences that don’t reflect the level of harm that the individuals may or may not have caused add to the victimization of these marginalized groups. Not to mention that upon release from prison, people with HIV who were incarcerated for not disclosing their status must register as a sex offender. Thus, these individuals not only face discrimination for having an illness, but they also face housing, employment, and additional social marginalization for being a registered sex offender. Without a doubt, the criminalization of HIV in the U.S. does more to encourage the stigmatization and hatred of people with HIV than to prevent people from transmitting the virus to others.

The way that the criminalization of HIV in the U.S. works is that if you knowingly have HIV and still engage in “risky” behavior — which can vary from vaginal or anal sex, to sharing needles, to getting your saliva on someone else — but do not tell anyone else who is participating in these behaviors that you are HIV positive, you can be prosecuted. The easiest way to avoid prosecution, given that it isn’t guaranteed that you can prove that you disclosed your status even if you did inform any partner(s) that you have HIV, is to not know whether you are HIV positive or not. The criminalization of HIV actually encourages people to avoid getting tested for the virus because they will not be held accountable by the law for transmitting the virus if they did not know they have HIV. HIV-specific laws also encourage people to not get treated because many healthcare providers are obligated to share medical records related to a person’s HIV status in the case of investigation or trial. Some healthcare providers require their patients to sign documents that hold the patients liable for criminal conduct should they engage in “risky” behaviors. These laws that allegedly exist to make the world safer actually promote mistrust between patients and healthcare providers, and essentially force people to live sick and untreated for fear of prosecution. 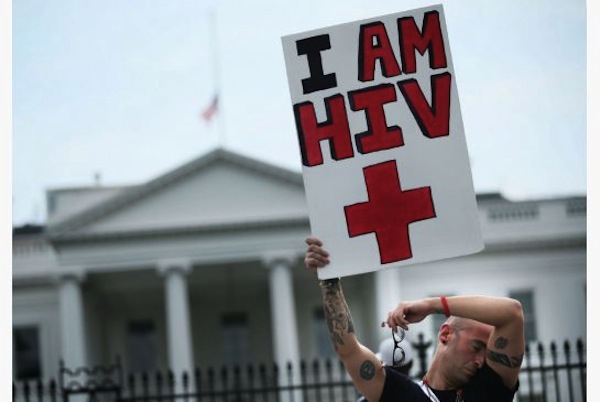 5. Only one state so far has repealed its HIV-specific criminal statute

In late May, Governor Terry Branstad of Iowa signed a law to repeal the state’s HIV-specific criminal statute; however, the repeal does not mean that there are no longer any laws that prosecute people with HIV. Instead, the Governor’s decision enacted a tiered sentencing system that considers whether the individual in question intentionally transmitted the virus, whether there was a significant risk of transmission, and whether transmission occurred at all. Fortunately, the new law ensures that prosecuted people with HIV no longer need to register as sex offenders and those previously forced to register as sex offenders retroactively will lose the sex offender registration. The law also incorporates other infectious diseases into its parameters which stops the law from being HIV-specific, but also allows for the criminalization of other illnesses. Considering that only one state has repealed its statute and even in its repeal, the law still proves problematic, it will take a great deal of time before we see some effective decriminalization.

The criminalization of HIV in the U.S. is just a mechanism to regulate the behavior of people living with HIV. It encourages riskier behavior than it aims to prevent by shaming and forcing people to avoid testing and treatment. It also furthers incorrect information and assumptions about HIV transmission by preserving HIV-specific laws that do not consider modern advances in medical technology. Most importantly, the criminalization of HIV promotes unhealthy standards for sexual relationships by victim blaming those with HIV instead of teaching people to have sex with both their partner’s and their own safety in mind. Sex and needle sharing can happen between multiple people and these laws don’t encourage mutual responsibility. Instead of placing the burden solely on those diagnosed with HIV, the burden should also be on anyone else engaged in sexual activity or any other behaviors that put a person at risk for contracting HIV. HIV-specific laws cultivate a culture of shame and stigmatization around disease and it’s about time to break this chain of social violence.