One week after the Supreme Court ruled 5-4 that privately owned companies that cite sincerely held religious beliefs can be exempt from providing certain types of birth control to employees, that decision’s broader ramifications are already becoming clear.

The day after the ruling, a group of conservative faith leaders submitted a letter to President Obama appealing for the inclusion of a religious exemption in the forthcoming executive order prohibiting hiring discrimination against LGBT people by employers that receive federal contracts. Though the letter doesn’t refer to Hobby Lobby directly, “the administration does have a decision to make whether they want to recalibrate their approach to some of these issues,” said Michael Wear to Molly Ball of The Atlantic. Wear is a former Obama White House staffer who organized the letter.

In other words, conservative religious leaders agree with Justice Ruth Bader Ginsburg, who wrote a 35-page dissent of the ruling, that the Hobby Lobby ruling will bolster future lawsuits demanding exemptions to the law based on religion. As Ball states in the Atlantic article,

To these religious leaders, Hobby Lobby ought to prompt the White House to reexamine the way it weights religious rights against other priorities. Liberals opposed to the decision, on the other hand, argue it creates a slippery slope to more and more carve-outs from important legislation for claims based on faith. This executive order could be the next battleground for those competing points of view.

The executive order comes in response to the House’s refusal to consider the Employment Non-Discrimination Act, ENDA, after it passed the Senate last year. That bill did include religious exemptions, but it is unclear whether the executive order will. In the wake of Hobby Lobby, gay rights groups are withdrawing support for ENDA after decades of fighting for different versions of that law. It’s a move they don’t take lightly, Rea Carey, executive director of the National Gay and Lesbian Task Force, told the Washington Post, but “the implications of Hobby Lobby are becoming clear.” 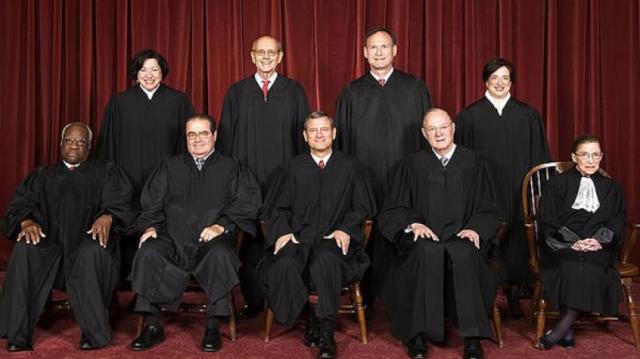 Guess what the three women justices on the court have in common regarding this ruling.

Nancy Wilson, the moderator of the Metropolitan Community Church, said she can’t support an LGBT non-discrimination law that includes the kind of broad religious exemptions the conservative church leaders are asking for because it may cause more harm in the long run. She helped organize a letter signed 100 progressive Christian, Jewish, Muslim and interfaith leaders urging Obama to keep any religious exemption in his executive order as narrow as possible.

The people in this country and the president’s supporters are not in favor of him amending this executive order, and I don’t see why he would go against his own best interests to do that. There are many people of faith who disagree with the Hobby Lobby decision and with the increasingly broad religious exemptions. I feel the religious right characterizes itself as speaking for all people of faith and religion, but there is tremendous diversity among people of faith. To say a group that has a federal contract would still be able to discriminate on the basis of LGBT identity or any other reason, it’s not right. I’m a taxpayer, and for my taxpayer dollars to go to organizations that are discriminating against my own community? If they’re discriminating in employment, what’s to stop them from discriminating against their clients?

Such exemptions go against the constitution and scripture, said Harry Knox, another letter signee. He is the executive director of the Religious Coalition for Reproductive Choice, which fought actively to mobilize people of faith against Hobby Lobby’s, and ultimately the court’s, interpretation of the First Amendment.

“Those of us in progressive religious circles operate from a theology of inclusion and compassion and liberation,” Knox said. “It’s the constitution that provides us with religious liberty. The theology that makes me support that is a deeply held belief that we do best when we care for our neighbor as we care for ourselves.”

Hobby Lobby has already come under scrutiny for discriminating against a trans employee. Meggan Sommerville, who works at the stores Aurora Illinois location, is locked in a three year battle over her right to use the women’s restroom. Though the company recognizes her legal gender and name change, the store says she cannot use the women’s restroom unless she undergoes genital reconstruction surgery.

Her case claiming discrimination in public accommodations is still pending, and Hobby Lobby has refused to comment on it. 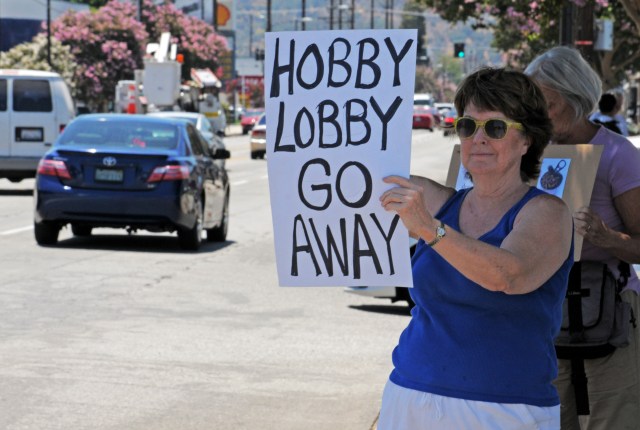 Pretty much how we all feel at this point.

Even progressive groups and individuals are often willing to support religious exemptions to pass LGBT rights laws. Though it may seem pragmatic on the surface, it creates an untenable situation for queer people who don’t have the economic freedom to consider a company’s corporate policy when seeking work. And, it denies the existence of queer people of faith whose identities are often put into conflict by progressive secular groups and conservative religious groups alike. That faith leaders have written the president to demand the legal right to continue discriminatory hiring practices runs counter to the golden rule of loving one’s neighbor as oneself, a message found in many world religions.

It remains to be seen whether Obama’s executive order will include the contentious religious exemptions — and what future rights religious leaders and CEOs will try to deny employees and clients based on Hobby Lobby.