This week in No Filter, the sun and the moon did some crazy shit and all the celebrities we pay attention to responded accordingly! At least, most of them did. Also, some of our problematic faves got caught up in the latest nude photo leak (or whatever), which we’re not gonna write about here because it’s violating and gross! Know what isn’t violating and gross? Dorky eclipse glasses.

We did it! We also gave our extra pair of glasses to a food delivery guy and he was… less than impressed.

WHAT A CUTE COUPLE OF NERDS.

work stopped on #brooklyn99 so we could all do this at the #eclipse 🌒 light a candle today 🕯and set some intentions: this is a big day for letting things go and ushering in new eras and patterns for yourself. 🌒 #raisethevibe

Stephanie Beatriz took some time out from looking really goodlooking to… nope, she multitasked.

https://www.instagram.com/p/BYEHbLxlNVU/
The Quin cats know how to handle a once-in-a-lifetime eclipse, let me tell you.

#v8900 in a very special navy and cream cotton silk from @wearethefabricstore in LA- the cut outs gave me heavy anxiety but I successfully Tim Gunned them in the end : blog at jasikanicole.com ♥️

There are two Jasika Nicoles and they’re both better at everything than twelve of you.

When you’re a cool sexy famous person like Cara Delevingne, you can swim with whale sharks that look suspiciously like one of my favorite Facebook stickers of all time: 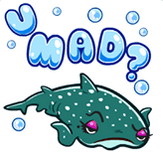 Nobody even told Stella Maxwell there even was an eclipse…

…while Chelsea Manning was the actual sun in the sky, so.

Its amazing when you have such kind and talented friends like @zanecarney who when you pitch an idea for a cover are on stage playing it with you within hours. The significance of this song is all too relevant in these times and it was hard to do without crying, but for a few moments everyone felt hope and love. I dedicated this song to my son. May you forever bloom and grow. 💙

I guess ERW is upset that we’re still in a fight because she performed this very sweet rendition of “Edelweiss” and dedicated it to her son. I FORGIVE YOU.

All the TNG/TOS crossover novels are now mine

It’s no Joan Didion, that’s for damn sure.

I love being gay

Sarah Paulson and her costars (all playing different characters in Riese’s real life in this season of American Horror Story) went to a Cher concert and she fucking livestreamed it and nobody has ever wanted to watch anything less than I want to watch your Instagram livestream of a concert I’m not at… but I will forgive you this one time.

Join us next week, for whatever extraordinary celestial something-or-other leads famous people to take goofy selfies.