Welcome back to No Filter, an increasingly necessary space in which we process the week in queer celebrity Instagram instead of dealing with other, more serious current events. When I’m not scouring the internet trying to figure out what Janelle Monáe’s up to, I’m mostly screaming into a pillow!!! This week in important news, Cara Delevingne and Ashley Benson were seen near each other at a thing, these lesbians are dating, Kristen Stewart and Stella Maxwell are FINE THANK YOU and Lindsay Lohan tried to steal some children and got punched in the face????

This whole thing’s a bummer from start to finish but I must point out how bizarre it is how the second she gets hurt her inexplicable accent suddenly evaporates. Nothing good is happening here.

we look like the L word reboot. mark is the business dyke, I’m Shane.

Reader Claire WROTE IN to alert me to the fact that King Princess is indeed incorrect; Mark Ronson is (according to her) Dawn Denbo, and King Princess is none other than Billie Blaikey. I encourage everyone to jump in with their feelings about L Word characters, and the queer celebrities who embody them.

Now that she’s pointed it out, I can’t help but see the resemblance. 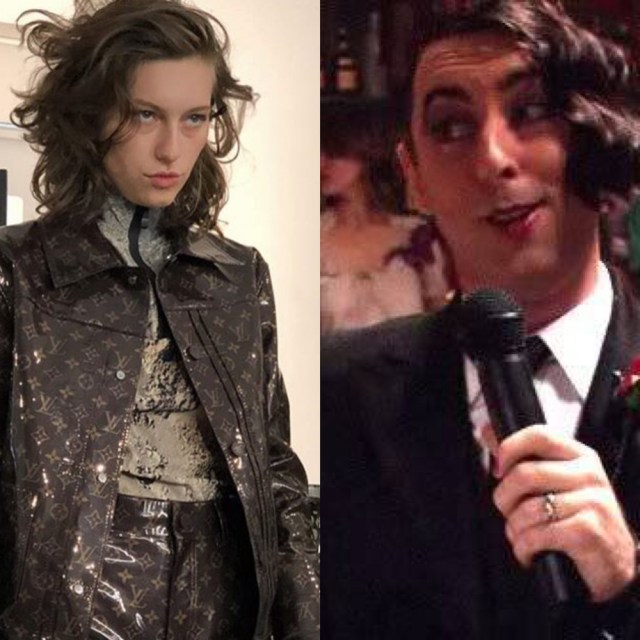 This has been a stressful week so Tegan and Sara wisely turned off comments on their Instagram and then hastily filled it with cats and NONE OF YOU CAN SAY ANYTHING ABOUT IT.

Here are a few of my fave pics from my 👸🏻 ‘s 30th birthday party. @teddygeiger I ❤️ all ur #moods

Everything else in the world hurts so imagine these two lovingly eating birthday cake together.

Please make Spookylani’s Halloween Spectacular a thing I can have in my life? I envision it as a spooky variety show.

Look I know Hayley Kiyoko isn’t from New York so maybe she didn’t know but girl, when one car on the train is empty like that, there’s usually a reason.

I used to work at #Blockbuster. I was that employee you could tell me half the logline and one actor in it and I’d instantly know the title. I was like rain man in that bih.

I wanna rent a shitty Halloween sequel from Lena Waithe so BADLY.

I never really knew what happiness was . That is not an exaggeration. Happy engagement , my handsome dream. #thanksforasking #queerloveallovertheworld🌏🌎🌍 #loml❤️🔐 #actuallyhappy #weirdosinlove thank you ,teddy. You’re one of a kind and I’m not lettin’ you go! So …… @tedkwo

Gaby Dunn went to an aquarium and learned that jellyfish are gay. Also gay: garden eels, cuttlefish and all sharks.

I got a very appropriate score in Akron over the weekend

This is a professional comedian hitting you hard with some area code humor!!!

#tbt to a bitch getting her ENTIRE life 📹 by @brockeddyharris

I thought we could close this week out by pretending to dance to Whitney Houston with Samira Wiley; it’s just about the only thing that’s made me smile in days.