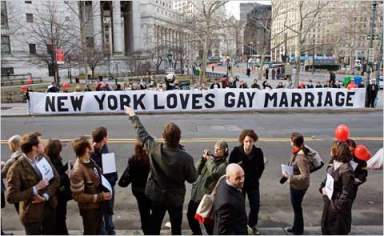 A mere seven months after I moved from New York to California, New York is closer to getting same-sex marriage than it’s ever been and California is actually entertaining the latest set of ridiculous claims set forth by the Prop 8 people.

Today, 24 high-profile New York business leaders released an open an open letter declaring their endorsement of same-sex marriage as a wise move for the economy as it’ll help companies attract good people and keep them there. Some of the 22 rich dudes and 2 rich ladies involved with this letter include the chairman of Morgan Stanley and the chief executive of Goldman-Sachs.

One prominent supporter, John J. Mack, the chairman of Morgan Stanley, said that he believed legalizing same-sex marriage would help attract more talent to New York, but that he saw the issue chiefly as one of fairness. “It’s that simple,” Mr. Mack said. “I grew up in North Carolina. I’m 66 years old. I grew up when there was segregation. It makes an impression on you.”

Same-sex marriage failed in Albany in 2009, but many of the executives who signed this letter are very well-known in political circles, both Democrat and Republican. Considering that the Republican Caucus voted unanimously against the 2009 bill, having big GOP donors involved with this campaign should probably make a difference.

A bit from the letter:

“To remain competitive, New York must continue to contend with other world cities to attract top talent. Increasingly, in an age where talent determines the economic winners, great states and cities must demonstrate a commitment to creating an open, healthy and equitable environment in which to live and work. As other states, cities and countries across the world extend marriage rights regardless of sexual orientation, it will become increasingly difficult to recruit the best talent if New York cannot offer the same benefits and protection.”

Recent polls indicate strong support of gay marriage in the state (58% in favor!) and activists are out canvassing for same-sex marriage anywhere they can.

... Quinn said that she believes New York is on the verge of an “amazing, amazing victory” for marriage equality, and she suggested that her recent lobbying has been able to change at least one state senator’s vote from no to yes…

“If it wasn’t for all of you [at the Family Equality Council, we wouldn’t be on the verge of what I believe is going to be an amazing, amazing victory for New York,” she told the crowd of 600 attendees at Pier 60.

Since we’re discussing “recruiting gay people to your city by offering equal rights,” it’s worth looking at the state which once lured people to its city by offering protection from homophobia and, for various periods of time in the city of San Francisco and in California itself, marriage equality. 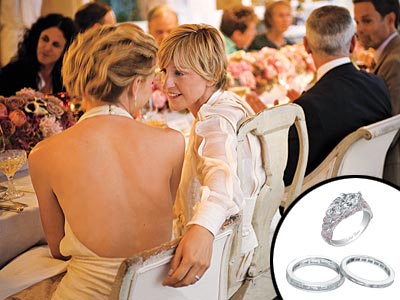 Ellen & Portia got married in California before the mormons ruined everything

At the current moment, New York and California are more-or-less on par with one another with regards to legal protections for gay people. Both states do not perform same-sex marriage but do recognize same-sex marriages performed in other jurisdictions. Both states allow same-sex partners to joint adopt children. Both states offer domestic partnerships to same-sex couples.

In 2008, all of us New Yorkers got SUPER jealous of our friends in California who, in addition to gloating about the temperate weather, had “equal rights” to brag about as well. When Prop 8 got overturned, gays in both states redirected their jealousy elsewhere, with a large percentage choosing “Canada” and others wondering if they might want to raise some kids in Iowa. How the tables have turned! 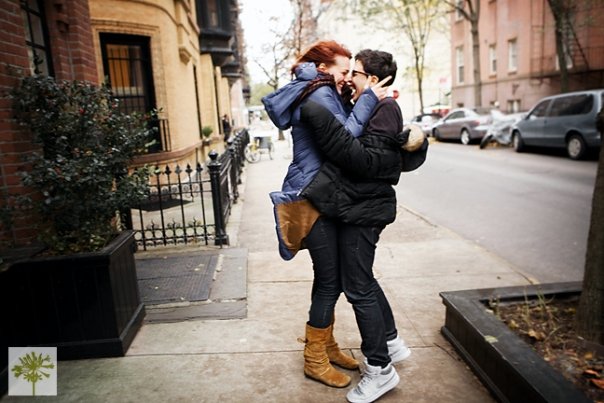 Nobody expects any legislation on any issue to inspire a huge hoard of gays to pack up and migrate to a new state, but New York City, San Francisco and Los Angeles are unique in that many gays actively DO choose one or the other to live in for relatively impersonal reasons (climate/housing costs/environment/scene) which have more to do with how much they genuinely LIKE each city rather than proximity to family or a job offer. Many move back and forth between the two cities and most have friends in all three cities. If you’re looking for an artsy, urban, gay-friendly environment, you’re gonna at some point be faced with the dilemna: CA or NY?

However — I doubt Goldman Sachs is worried about losing Choice Cunts patrons to The Abbey, they’re probably much more concerned with Wall Street and the two-income gay men who work there. Hell, whatever gets the job done!

Meanwhile in California, a date of June 13th has been set for the Prop 8 Activists to argue that the ruling on Prop 8 should be thrown out because the Judge was gay:

A June 13 hearing has been scheduled on whether a ruling that struck down California’s gay marriage ban should be thrown out because the judge is in a same-sex relationship.

Lawyers for the sponsors of the voter-approved ban asked Ware to vacate Walker’s August 2010 decision overturning the ban as a violation of gay Californians’ civil rights.