A New Jersey judge ruled Friday morning that the state must follow in the federal government’s footsteps and recognize marriages between same-sex partners. 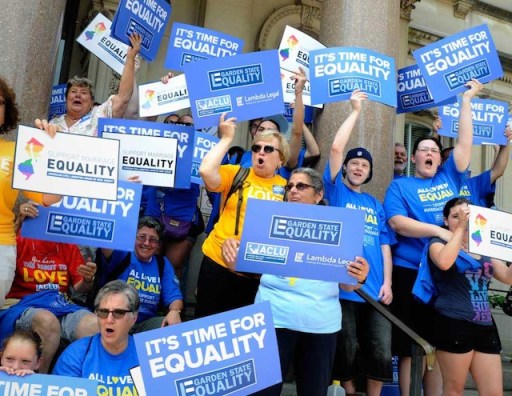 The suit filed by Garden State Equality points to the Supreme Court’s ruling in United States v. Windsor, the landmark decision that struck down the Defense of Marriage Act and officially recognizes same-sex marriages on a federal level. Currently, same-sex couples in New Jersey can enter into civil unions, and in 2006 the state’s top court ruled that those unions must be granted the same legal rights and protections as marriage. Now, Judge Mary Jacobsen has taken things one step further, ruling that barring same-sex couples from marriage is a violation of the New Jersey constitution. This is one of the mounting numbers of victories for equality and for gay families stemming directly from the repeal of DOMA, including stories like the fact that Jennifer Tobits was recently allowed to receive benefits from her late wife’s employer.

A spokesman for Governor Chris Christie stated shortly after the ruling was announced the governor plans to appeal the ruling, meaning there’s no certainty New Jersey couples will be signing licenses any time soon. Christie has opposed marriage equality in his state with increasingly nonsensical rhetoric for some time now; especially given his possibly aiming for a Presidential nomination in 2016, he may be very motivated to stop marriage equality in its tracks. He’s also in the middle of a race for re-election against Barbara Buono, who supports marriage equality and also has a gay daughter. Christie’s statement on the matter, delivered by his spokesman Michael Drewniak, was:

“Gov. Christie has always maintained that he would abide by the will of the voters on the issue of marriage equality and called for it to be on the ballot this Election Day… Since the legislature refused to allow the people to decide expeditiously, we will let the Supreme Court make this constitutional determination.”

In many ways, what’s happening in New Jersey feels reminiscent of Prop 8 — conservatives trying to stand in the way of marriage equality because it’s “the will of voters” and ignoring the constitution feels pretty familiar. But with DOMA’s repeal, the story might be very different this time. For now, this looks like it could be a victory — or at least a step in the right direction.