I live in New Jersey right now. I moved to New York City for a hot minute, but life happened and I had to move back to the state in which I grew up. The Garden State isn’t the crazy undesirable locale that New Yorkers and Pennsylvanians would have everyone believe – the majority of it doesn’t look like the Sopranos or Jersey Shore, and it certainly doesn’t look and smell like Exit 13 on the Turnpike. We are not one giant, densely packed reflection of Toxic Avenger. I actually grew up riding horses in an area with a lot of farms. We have really excellent diners and a thriving arts scene. Our state university is on par with some Ivy League schools. We have this thing called Weird NJ which is really neat/fun. My friends who grew up here are brilliant humans. You don’t have to pump your own gas.

It has become increasingly difficult to defend my home state, however, with our governor saying dumb things left and right, like his brief on marriage equality. Are you ready for a headdesk the size of a Jersey hair-do? 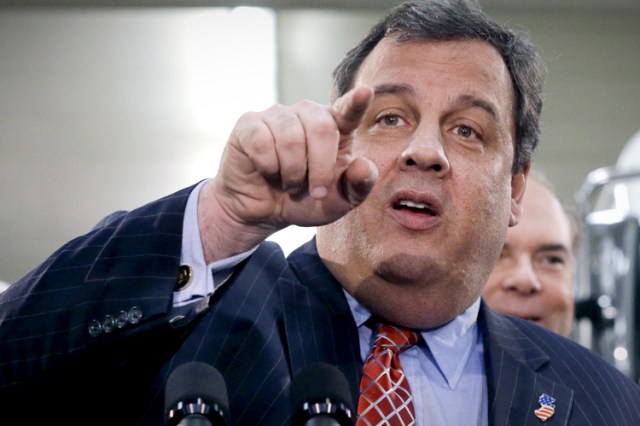 This is Chris Christie, New Jersey governor, via Salon

Six couples in NJ sued for marriage equality in 2011, and with the DOMA ruling in June they’re now rightfully pointing out that the marriage ban in New Jersey is inherently unequal because same-sex couples living in NJ aren’t eligible for federal benefits if they’re civilly united, which New Jersey does allow. The Christie Brief, written with State Attorney General Paula Dow, was just filed in this case and basically makes three arguments against marriage equality for New Jersey and then refutes those arguments IN THE SAME EXACT DOCUMENT, but… still remains a legal brief in favor of a marriage ban? You can see for yourself below.

Ridiculous Chris Christie Argument #1: the label is important and also not important. Restricting the term “marriage” to heterosexual couples preserves the institution of marriage, yet he also refutes his own argument. I kind of can’t say it better than Slate did, so I’ll just leave this right here:

The brief then does an about-face, insisting that the nomenclature distinctions have no meaning at all—an effort to show that the law is not rooted in anti-gay prejudice. A “long-standing precedent,” the brief explains, dictates “that courts look to essence, not label.” It cites a 1915 court case finding that a law’s import “lies in the essential nature of the work done rather than the names applied to those engaged in it.” The brief goes to great lengths to drive home this point, even dragging in the Bard: “Shakespeare wondered what’s in a name?; for purposes of federal criminal law, the answer is ‘nothing.’ Substance rather than nomenclature matters.” And: “A rose by any other name is still a rose.” And: “Calling a dog’s tail a leg will not give the dog five legs.”

Let’s imagine for a moment that it’s true that nomenclature doesn’t matter a whit. If that’s right, then it’s the strongest case yet for the other side. If there is nothing in the name “marriage,” then New Jersey’s Civil Union Act has no rational relationship to an important state interest. The label is the single distinction the law makes. How can that both serve a compelling governmental interest and mean absolutely nothing, at the same time?

When I read this, I felt like my mother felt when she discovered her ex-husband wound up years later an Elvis impersonator: Frightfully embarrassed, with a healthy helping of “I cannot possibly explain this” on top of “I do not want to be associated with this guy.” Except I can’t divorce Chris Christie. My tax dollars pay his salary. The brief also uses the term “partner” and “spouse” interchangeably, and incorrectly. Gay couples in a civil union aren’t spouses. That’s why we’re all here.

In its brief, the state says it believes the federal ruling will give couples in civil unions federal marriage benefits even if they live in states where they are not recognized as married. The state notes that some federal agencies are considering extending protections to non-married gay couples. The state also argues that New Jersey courts should show caution because there’s a dispute over the question.

I found no evidence to support such optimism, which makes me wonder why the legal counsel for an entire state did not also spend a half hour on Google and allow itself to come to the same conclusion I did. In fact, I found that some federal agencies have already decreed that they will not be extending benefits to partners in a civil union.

Ridiculous Chris Christie Argument #3: we should all be super cautious about making large social changes. Social change my ass, it’s legal in Iowa, for crying out loud, and the majority of residents in New Jersey oppose the current ban on marriage equality (isn’t it strange that in 2013 I have to write a thing about an equality ban? EQUALITY BAN?!), as pointed out by Queerty in their coverage of this knuckle-headed brief-like substance.

I’m trying not to sound too angry here. I’m trying not to take this too personally. Except it is. I was raised here, in New Jersey. I’ve spent most of my life living in New Jersey. I went to that awesome state university. And as it stands now, I would have to leave New Jersey to make my future look the way I want it to look. I can’t live a large portion of my life in New Jersey without punitive taxes. So I’m going to leave. Again. And my excuse for a Governor is still arguing for my second class citizenship. In this case, impartiality is out of the question because I’m covering policy that directly affects my life and my choices, that is in direct opposition to my identity and reality. Chris Christie, his party and his politics are the reasons I want to leave New Jersey.

So next time I’m at a barbecue and my girlfriend’s entire family is ragging on me because “New Jersey sucks,” I’ll reflect on all those great things about New Jersey. Then I’ll balance them with my own governor and government fighting against my rights as a citizen. And then I’ll probably reply, “You’re right. It really does suck, doesn’t it?”

The judge will hear arguments on August 15th.