Hello all you little tweetdecks. Netroots Nation is over, and I am hung-over and traveling on a bus through the great sprawling flatlands of the Midwest. The bus driver keeps yelling, but not at me, so I guess it’s okay. ANYWAY. Yesterday was a long, long day that began with my panel, Queer Media and the Alternative Revolution (which was not videoed but instead live-tweeted, also here) and ended with the Daily Kos official Netroots afterparty, which featured an open bar and lots and lots of older people getting drunk and dancing in business casual. Needless to say, I fit right in, and now I have this phone number on my arm in what appears to be permanent marker, and it says “ANDREW BLOG” under it, so I guess that means my networking attempts were a success.

So let’s get on with it, shall we? Yesterday after my queer media panel, I attended lunch with Keynote speaker/bad-ass Van Jones, a Speak Out for Good Jobs rally led by Rep. Keith Ellison, and a session on sustainable blogging, which can more or less be summarized by hashtag #getadayjob. Seriously you guys I am so broke that I’m about to take the dollar sign from Ke$ha’s name and try to cash it in at my bank.

Aside from that, I learned a lot. As someone who admittedly, though not necessarily proudly, shies away from most things political, it was generally healthy and stimulating and informative to be surrounded by people who know what they’re talking about and who, more importantly, are excited about what they’re talking about. I feel like it woke up a lot of things in me (but not my legs because they are forever asleep on this Greyhound), but my newly rediscovered feelings about politics are for another post. The point is that this conference brought together a great many number of people and organizations (this year’s conference was the most highly-attended Netroots to date) representing a huge diversity of opinions, causes, and peoples. Here are some things that I learned we have in common: 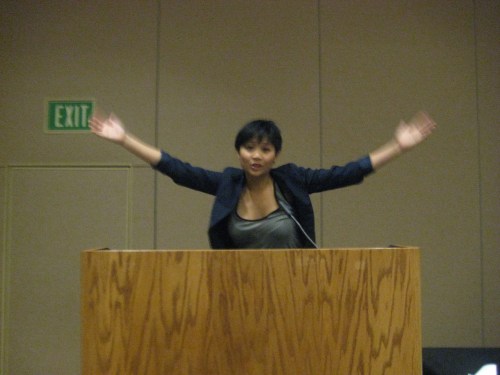 This picture of me exists

Oh my god you guys, this conference was so fucking #meta. Being on Twitter at this conference was like watching a video of puppies watching a video of themselves. At one point I watched a group of bloggers engaged in fierce battle over the correct usage of the official hashtag of the Speak Out event I attended (it was #spkout, by the way. It said so on the banner on stage). It was like #hashtag-a-palooza up in here, let me tell you. With all hands on TweetDeck, it was almost startlingly easy to find news, opinions, and highlights  from any session at the conference. Does being amazed by this make me an old lady? Because if it does, hand me the prune juice and get the hell off my lawn, because I am floored. Other Twitter highlightsincluded the fact that I substituted tweeting at new acquaintances for my lack of business cards and also the opportunity to get immediate feedback from the panel audience by checking my @ mentions while on stage. I also live-tweeted throughout most of the conference.

Also, once when I was napping unabashedly in the hallway, a huge commotion broke out on the other side of the Convention Center. Instead of removing myself from the floor, I searched the official Netroots hashtag, #nn11 and got a report on what was happening, running commentary, and even pictures. It’s like going online to check the weather instead of getting up and going across the room to open the window. Embarrassingly lazy, but so, so easy.

I don’t actually have that much to say about this. It’s just like, you know when you’re out on the town scouting for ladies, and every girl who seems like a sure-fire lesbian is actually a hipster (though I still hold that these things are not mutually exclusive)? Well the same can be said for an older generation of progressive bloggers and political analysts. What is is about flowy skirts, sensible shoes, and power suits and conversations about someone’s six children that makes these things run abundant at a progressive conference? We’re just going to have to face it: we lesbians will forever be locked in a battle with business casual.

Other than that, it’s interesting to note the seemingly disproportionate numbers of homo-gays present at this conference. I suppose it’s a no-brainer to say that LGBT folk have a tendency to support progressive causes, but it’s nice to know that not only are we gays working toward supporting our own causes but are also infiltrating the ranks of prominent progressive organizations, ensuring that the LGBT community will not be left out of victories in politics, in the fight for jobs, in immigration, and of course, in the blogosphere.

Netroots was a really beautiful thing for me personally because it brought together bloggers IRL and also put bloggers in touch (like real, live human touch) with the people we write about every day, whether it’s in politics or culture. I actually hate asking people for pictures, but after I reached a certain point of squealing and whispering, my girlfriend coerced me into taking these: 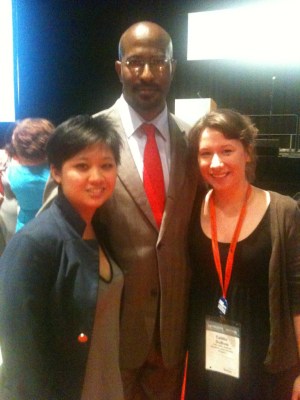 Okay, seriously, can we discuss how no one ever looks good in pictures like this? Even Van Jones, who looks very serious and very tough and very wise buttoned up his jacket in order to conceal what he referred to as his potbelly. This is not what I look like, I don’t look like this. In fact, I look kind of stoned, and this isn’t even what I look like when I’m stoned.

Girlfriend: “No one looks cool standing next to Van Jones, not even me. Also, it’s amazing that somewhere there was a source of light so small and so precise that it illuminated only my nose.” 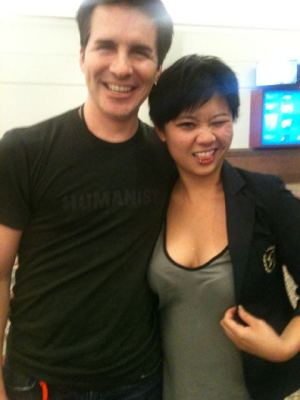 Standing next to Hal Sparks automatically makes me Brian Kinney

I am a nerd and chicks dig it.

There was so much free beer at this deal, you guys. The AFL-CIO taught me to raise a glass to the working class by supporting union beer breweries such as PBR, Leinenkugel, Miller, and Budweiser, as well as some considerably less-than-evil liquor distilleries (Jim Beam, Beefeater, Smirnoff). And while getting one’s drank on is a lovely social activity as well as an apparently effective social networking lubricant, it can also be an opportunity to honor the struggles of the workers and unions who fought for fair living wages, safe working conditions, and just treatment from the corporations who prospered off their work.

And it’s not just about workers not being able to trust corporations, as LGBT people, we see our beliefs and our being insulted, slammed, and sold back to us by retailers every day (Target, I am looking at you, you Born-This-Way-selling, Minneapolis-pride-sponsoring, hypocritical motherfuckers). It’s easy to feel betrayed, because we have been betrayed, but it’s hard to stop consuming. It’s hard not to feel guilty. It’s expensive to buy organic groceries farmed by Amish lesbians with multiracial children. IT’S HARD YOU GUYS. But here’s a reality: sustainable and progressive corporations exist. They are rare, but they are real. So take some advice from this sticker, y’all: 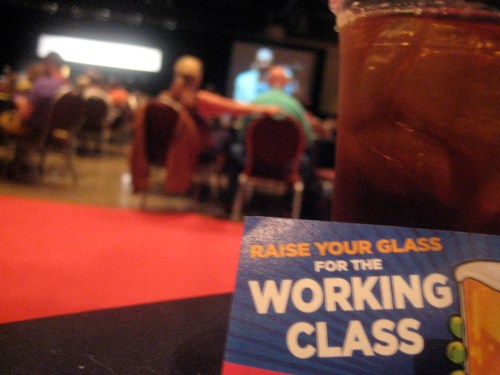 this picture captions itself. so meta.