Don’t Ask, Don’t Tell was officially repealed in September of 2011, and today the Pentagon hosted its first Pride celebration. Mitt Romney has admitted that even if he wins the presidential election, DADT won’t be reinstated. These things are excellent markers of progress. But something else important also happened this week, on a smaller scale: an officer in the Navy lost his job over a failure to address hazing and harassment that involved gay slurs and insults. 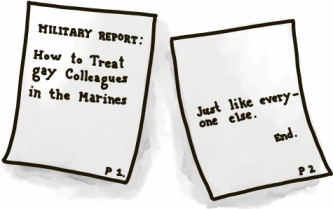 The sailor who was a victim of hazing was called “Brokeback” and “faggot” by his comrades, and over the course of several months, he was so deeply affected by the harassment he experienced that he feared he might harm himself or others. Most disturbing of all, although the sailor was reportedly generally well-liked, the harassment began after he reported an attempted rape at knifepoint while the ship was docked in a foreign port. After he reported it, fellow shipmates asked the sailor if his attempted rapist was his boyfriend, and according to the AP, “someone posted a drawing of a stick figure being sexually assaulted.”

Several of the sailors involved in the harassment have been subject to punishment, like loss of rank and pay. And Master Chief Machinist’s Mate Charles Berry, who had been “chief of the boat,” has been relieved due to “dereliction of duty.” The Navy ruled that while he hadn’t been involved in or responsible for the hazing, he had been aware of it, and he hadn’t taken steps to inform his superiors, as was his duty. Berry has been temporarily reassigned to a different post.

We already know that harassment and anti-gay sentiment in the armed forces can make an already dangerous and stressful job much worse for gay servicemembers, and increase the already-high risk of PTSD and suicide. And we already know that harassment and even assault can often go unpunished in the military, especially when its victims are women. So in this regard, the Navy’s reaction to this case is a big deal — one researcher who’s focused for years on hazing in schools and the military says that this is “a significant and positive response by the Navy in regard to requiring a chain of command to take responsibility in the event of a substantial hazing allegation.” It’s also an active step in making the military a safe place for queer people to serve. Allowing gay people to serve openly isn’t necessarily something to be patted on the back for if those gay people are still facing harassment and bigotry that’s tacitly sanctioned by the administration. The Navy’s response wasn’t all that it could have been; the sailor in question endured eight months of harassment, starting in 2011. But stories like this are an indication that the military really is aiming for a diverse and equal armed forces, and perhaps also a culture of accountability around hazing and harassment.