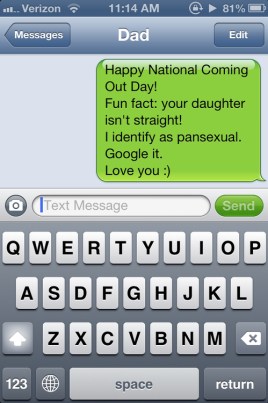 I came out seven years ago and it was one of the scariest things I’ve ever done. I was eighteen and dating my first girlfriend. Out of the blue, my mom asked me if she more than just a friend. I cried a lot. She was only upset that I didn’t tell her sooner. I let her tell my family and I am so, so lucky and grateful to have a loving and accepting support system in my life.

I was really scared to tell my friends, because there were a lot of rumors about my sexuality in high school. I denied the rumors constantly because I couldn’t even admit to myself that I was a lesbian even though I was kissing girls since I was six (my first kiss was in a closet! the symbolism!). The hardest part of coming out for me was admitting it to myself. It’s scary. Maybe this day could be that day for you. When I told my three closest friends, two of them said “We know and we don’t care” and one of them wrote me a long letter about how sad she was that I was going to hell. She has since come around and has apologized for the letter. Maybe things are bad when you come out, but maybe they will get better in time.

The most important part about coming out is showing people who might not know any LGBTQI people that we are human beings capable of love and deserving of rights.

Coming out stories are often scary, but sometimes funny and typically awkward. Two years ago, some Autostraddle writers shared their stories, which ranged from Taylor‘s really awkward mom moment, “And then, as though she was possessed suddenly by some sapphic demon whose realm was twentysomething nostalgia, my mom came pouring out with this entire sense-memory-ridden stream-of-consciousness tidal wave about her very close friend in college” to Laura‘s super funny teacher, “…When I used an adjective with a feminine ending, my teacher corrected me saying “no, make sure your nouns and adjectives agree.” I said “I know” and she started to explain again but then it hit her that I wasn’t stupid, just gay.” Crystal‘s mom’s reaction is eerily similar to how my mom took the news, “Oh. Okay. Do you need to talk about your … [super awkward pause] … feelings?” 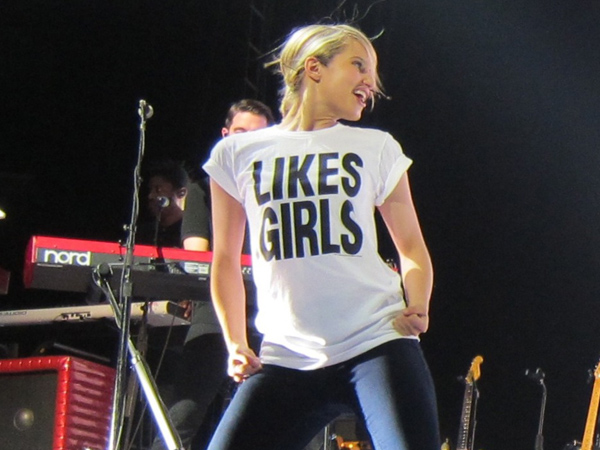 How did you come out and what changed after you did? Are you going to come out to your family today or maybe you just wish you could come out to your boss but it isn’t safe to do so? Share your stories in this open thread!