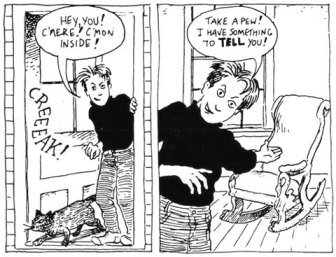 2. “She started crying and said “but Anne Heche changed her mind. It’s probably just a phase.“

4. “One night we were sitting doing a puzzle and I had got so annoyed with it that night that I looked at my mom and was like ‘i’m gay’ just to get out of doing any more on the damn puzzle.”

5. “I told my dad after sitting around in his workshop/the garage for an hour and procrastinating and talking about his childhood and Ukrainian polka music.”

6. “I was really high on painkillers and I thought I was going to die.”

7. “I figured I would just blurt it out over our game of Scrabble.”

8. “Everyone applauded, and we sat down and watched But I’m a Cheerleader.”

9. “I didn’t care really because I’m out and everybody has dreamed about Shane at least once I’m sure.”

11. “Then my cousin ran in the room shouting “Mom! Mom! You have to take me to the hospital right now! I’ve been farting rainbows, I think I caught the gay!””

13. “My poor girlfriend ran out of the house and fell on her face and broke her toe.”

15. “My sister said that she had guessed, because I liked “those twin singers” so much.”

17. “All the girls at my campus wear shorts up their ass, and it is terribly distracting.”

18. “Waiting for their emails back was way worse than when I waited for the 3rd Harry Potter book to come out.”

19. “As it was, all she did was conduct an on telephone exorcism to get rid of the Demon of Homosexuality.”