The Tumblr Fuck Yeah! Ryan Gosling consists of mostly pictures of the oddly perfect-looking Mr. Gosling with captions on them of him saying “Hey girl” and then something cheesy and gag-worthy. Ryan apparently knows about it and thinks it’s hysterical. I mostly don’t care because I’m super gay and don’t really put a lot of thought into Mr. Perfect-Abs. I didn’t even really like The Notebook.

Described by creator Danielle Henderson as “feminist theory flashcards from your favorite sensitive movie dude-turned-meme,” Feminist Ryan Gosling is a great answer to the weirdly objectifying “hey girl” meme. You have to admit, “Hey girl. My eyes are up here,” is way funnier than “Hey girl. I’m sorry my shirt fell off.”

The blog has only been around since Friday, but it’s completely spectacular. Do you remember that feeling you got when someone finally put together lesbians and Justin Bieber? That’s the feeling I have right now. It’s just great. I am so happy right now. 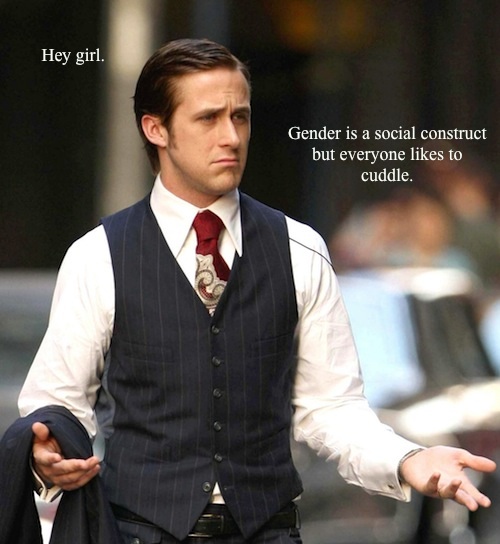