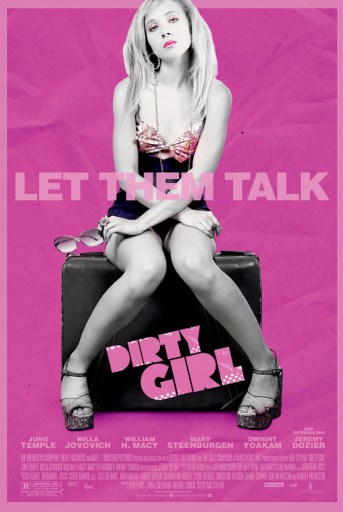 Dirty Girl stars Juno Temple and Jeremy Dozier as Danielle, the school slut, and Clark, the closeted homo. To ensure you’re immediately aware that Danielle is sexually active, the movie opens in the back of a Chevy in the school parking lot where Danielle is rocking some dude’s world. (A real slut would know all the secluded back alleys and other ideal sexing locations.)

Pat Benatar’s “Shadows of the Night” plays over the thumping of Danielle’s backseat rendezvous and for a moment, you feel as if the movie might just be the wild dirty sexy romp through adolescence you showed up for.

Unfortunately first-time director Abe Sylvia manages to push what should be a PG-13 Grindhouse flick into a confused Lifetime Movie. However, Temple, Dozier and the rest of his solid ensemble cast do their best to keep that from happening. Let’s discuss.

Juno Temple‘s Danielle walks the school ho walk with a low-brow potty mouth and some seriously irresistible confidence. She commands the boys at her school and seems impervious to the judgmental stares of female classmates. Yet, the second she steps into her home, Danielle is a vulnerable melancholic teenager dealing with the pain of an absentee father and a mother about to marry some Mormon guy.

Milla Jovovich is superb as Sue Ann, Danielle’s hapless but loving mother.  (God and she just gets more and more beautiful.  I’ve had a crush on Milla Jovovich since she was LeeLu Multipass Big Badda Bing.)  Danielle and Sue Ann’s relationship is fraught with the typical chaotic fragility you expect from an adolescent daughter and her Mom, but Sylvia really tries to convince the audience that the tension of their relationship is a result of Danielle’s father’s absenteeism. In addition to attributing Danielle’s hatred of her mother to the apparently inherent inadequacy of a fatherless household, he also blames her promiscuity on her “daddy issues.” Hey, he also wrote the movie! Why else would a girl want to have sex or have beef with her mom? Duh it has to be ’cause she doesn’t have a dad!

In line with typical film tropes, Danielle is punished for her hyper-sexuality. After keeping it too real in sex ed class, she’s sent to “r*tard class.” There’s no room for ho’s at this public school inn. 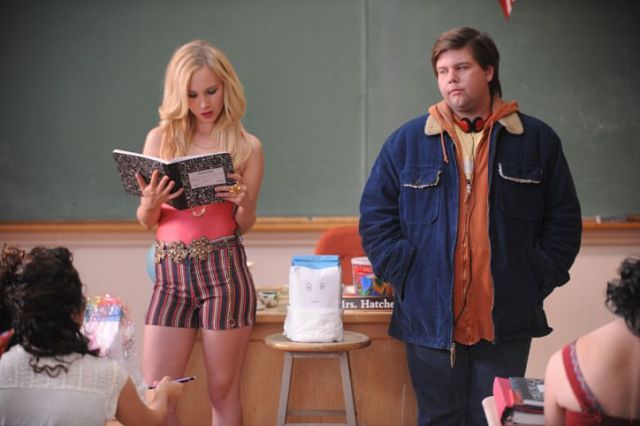 I'd be scared if they were my parents too, little baby flour bag

In special ed, Danielle meets Clark, the overweight in the closet boy homo, played effortlessly by Jeremy Dozier. Special Ed, it seems, is where the school stores its sexual deviants and people of color. (And the only place you’ll see people of color in the film.) (Also, why the fuck is Clark in special ed?!!)

Danielle and Clark become partners for the old heterosexual domesticity exercise “this sack of flour is your baby,” and thus are thrust into each other’s lives. They instantly develop the High Drama Best Friendship that only a slut and a fairy know how! (To be fair, Director Sylvia is also a gay man and expresses his love for and friendship with “dirty girls” influenced Danielle and Clark’s relationship.) 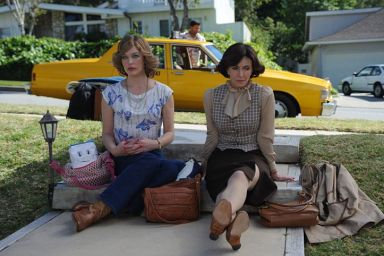 Milla Jovovich as Sue Ann and Mary Steenburgen as Peggy

Before I delve into their BFF-effery, here’s a lil background on Clark.  Surprise — Clark too has Daddy Issues. His pops, acted almost too well by a frightening Dwight Yoakum, hates “fags” because fags like penises and penises are of the devil!  Peggy, Clarke’s mother, actress Mary Steenburgen, silently acquiesces to her husband’s violent homophobia.  Because Sylvia is so focused on this being a movie about Daddy Issues, you’re never quite sure how Peggy feels about her son’s homosexuality or her husband’s hatefulness.

Now all of these scenarios could work together, just ask John Waters (he makes everything awesome!), but Sylvia milks each scene for its most grandiose emotional response. It’s unfortunate because his super talented cast, lush cinematography and rad 1987 score are just brilliant and give Dirty Girl all of its shine.

The film’s best moments are when Danielle and Clark are allowed to just be teenagers, singing along to the radio or confessing secrets. There’s some redemptive development near the end regarding the importance of mothers, but I don’t wanna spoil it for you so I’ll leave it there. Except to say that we eventually get some much needed MILF-y-ness in a film that rests much of its focus on the body of a teenage girl.

All in all, for a debut film, Dirty Girl is fun to watch, filled with stellar performances and reminds people over the age of 19 why it’s sooo awesome to not be a teenager anymore.