Based on your comments in general on this fine website — and “you” here represents the collective readership — you are into books in general, often scifi/fantasy in specific, and stuff about lesbians. If this is indeed the case, this may be relevant to your interests.

io9 has helpfully unearthed something which they are calling “the first lesbian science fiction novel.” It was written in 1906 by a Turkish Armenian who emigrated to America in 1877 and apparently worked at least some time as “photoengraver.” Neat! His scifi lesbian book, The Anglo-American Alliance, appears to be the only book he’s ever written, and even without the lesbians it sounds neat (minus the clearly and blatantly racist and colonialist parts, which are not neat, even if they are unsurprising given the time period):

The Anglo-American Alliance, set in the future of 1960, has two plots. The first is a detailed history of a 20th century in which the United States and the United Kingdom are the major powers on Earth, colonialism is still in force (Great Britain having colonized central Africa in the 1920s), and technology has advanced in a limited fashion: prenatal sex determination and suspended animation are now possible, a germicide for laziness has been developed, benefitting “the negroes of the Southern States” [sic], and an enormous telescope has discovered “vegetation and moving objects” on Mars and Venus. A Persian astronomer, Abou Shimshek, has found an “ice lens” which allowed him to discover a new planet on which live a race of telepathic, furred, electric-wheel-riding aliens. 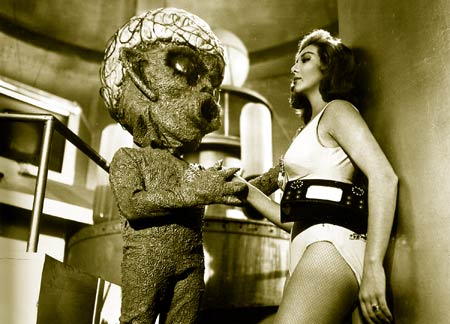 THIS IMAGE MOSTLY TOTALLY UNRELATED, IS IN FACT A STILL FROM THE FILM "LA NAVE DE LOS MONSTRUOS"

But also: lesbians! Check out:

…the romance between Aurora Cunningham, the daughter of Great Britain’s Secretary of Foreign Affairs,” and Margaret MacDonald, the daughter of an American senator. Aurora is beautiful, blonde, blue-eyed, gentle, and has a speech impediment: “a typical English maiden.” Margaret is Aurora’s “very antithesis. She was somewhat taller, with sparkling black eyes and raven hair, of imposing dignity and carriage, but withal the equal of Aurora in the matter of natural gifts and accomplishments. She had, moreover, a captivating frivolity and aggressiveness which almost bordered on masculinity.”

Spoiler alert: Margaret and Aurora are madly in love, but well aware that their romance is too dangerous to carry on publicly. At some point they have to part for some reasons involving graduating from school, and swear to never have an “alliance” with a man but to love each other for ever and ever. UNLESS they can find a  “Vivisectionist and Re-Incarnator” and turn one of them (obviously Margaret, were you even reading up above) into a man so they can be married. Which, duh, is what happens. So! The Anglo-American Alliance becomes the “first science fiction novel with a pair of lesbian lovers as heroines, one of whom becomes science fiction’s first transgender hero,” as io9 puts it. Fascinating, no? And this is the first I’ve heard about it! What have you learned today? I learned that I want to see La Nave de los Monstruos.

*feature image also largely unrelated, is in fact still from The Queens of Outer Space.