I was 22 years old when I kissed a girl for the first time. She and I liked all the same electroclash bands, and the tattoo on the back of her arm said “calm down” in Russian. She was engaged to a boy. We were out dancing at Don Hill’s with her fiancé one April night, the three of us giddy and drunk on rum and cokes, and I was having a perfectly lovely time until I blacked out. When I came to, she and I were furiously making out, stumbling around, slamming each other back against the wall of the sound booth, both grinning. I was taken completely by surprise, but I was told later that I’d initiated the whole thing.

When that relationship spectacularly imploded several months later, I was an absolute wreck, as I’m told many girls are. I promised myself that it was a one-time experiment, that it had something to do with that specific girl, that specific time. I told myself all the lies I needed to reconcile what had just happened with my life, which until that point had been certainly always open, but very much straight. It wasn’t until I kissed the second girl that even my therapist at the time laughed at me and told me maybe it was time to accept that my sexuality was not as cut-and-dry as I’d always imagined.

It was confusing to start confronting my orientation as an adult, as I’m sure it is for many other late bloomers, but I was doubly confounded because these revelations did nothing to help me achieve any sort of clarity. From what I’d heard, this was the sort of thing I should have figured out during puberty, or (as the cliche goes) at the very least experimented with in college. I was fairly certain I was still attracted to boys, but my eyes had been opened to a whole new world of possibilities. At the same time, the terms I’d heard  (“bisexual,” “pansexual,” whathaveyou) did nothing for me, and I felt like none of these things directly applied to me. Sometimes I’d look at my friends who were just straight or just gay, or hear people on this very website confidently talking about how they’d known they were gay since they were little kids, and tried to imagine being so certain about anything. (While also recognizing that such absolute knowledge of one’s absolute gayness came with its own set of terrifying consequences and privilege loss.)

On top of this, I wasn’t sure about coming out to my parents. I knew enough about their political affiliations that they wouldn’t mind at all and that they would be supportive, and I knew not to take that for granted, but I also knew that it would irrevocably change our relationship and the way they looked at me, their only daughter.  Despite knowing it wouldn’t be any sort of dealbreaker, I was terrified to take that step.  I decided that until I found myself in a relationship significant enough that it warranted such a discussion, I would keep my identity crisis to myself.  My family and I had never really talked about my relationships in depth before, so they didn’t seem to notice when I took my personal life out of our conversations entirely and began speaking in genderless pronouns.  For them, life continued as it always had.  All the same, keeping that secret troubled me in ways I was unaware of until years later, when the weight of it started to become extremely painful.

I justified my silence to myself in all sorts of ways.  When you come out to your friends and family as gay, that’s it – you’re just gay – everybody knows what that means (more or less) and what they can expect from your relationships in the future.  With this, I faced an uphill battle.  Every relationship I’d ever be in would be met with a certain level of criticism, and the gender presentation of all of my past and future partners would be analyzed as some sort of clue to my real orientation. With no terminology to describe my feelings and no self confidence to back up my choices, I shut down.  I didn’t know what to say. Despite in-between sexuality being a relatively widespread phenomenon (hello, Kinsey scale), society is still largely convinced that such a thing cannot possibly exist, that it’s either a stepping stone on the way to lesbian land or a weird experiment. This was always incredibly hurtful, and as a result I never felt like I belonged to any specific community. I saw myself as too gay to identify completely with my straight friends, but I didn’t feel gay enough to party with the lesbians. At different times, I would be more attracted to a person of one gender over another, and I found some friends’ surprised reactions disheartening. It was around this time that Autostraddle was beginning, and while I was excited to embrace the opportunities I knew the website would provide, in my heart I felt a strange distance from the other girls. I wasn’t sure the readers would accept me because I felt so different, and in the end this self-fulfilling prophecy contributed to my decision to drop off the team fairly early in the game.

Then of course came the inevitable girlfriend and the relationship that changed everything about my life. It was my first relationship where we were not only 100% healthily in love with each other, we were talking about major life plans and where we wanted to live and the scope of what we wanted to do with our entire lives together. I was planning a cross-country move based around her grad school calendar, changing the entire trajectory of my career because of Love and Compromise and other mature things. When that relationship ended (and oh girl, it ended BADLY), I found myself devastated in a way I’d never been before, mourning not only the loss of the girl but the life we thought we’d share.

Obviously I was a weepy mess, trapped alone in my dark cave of a bedroom with my Fiona Apple records and my feelings, and nothing anyone could say or do could fix me. A very patient friend compiled a list of resources I might look into for counseling, and the one that made the most sense to me was the program at my local LGBTQ center. This was a huge deal; I’d never taken advantage of resources for the LGTBQ community because of some self-loathing notion that I didn’t belong and it wouldn’t be for me.  At this point, I was in fairly desperate need of help and could not wait to navigate the nightmare that is this country’s mental health system when you’re a person without health insurance, so I sucked up all my moot feelings of alienation and just made the call. 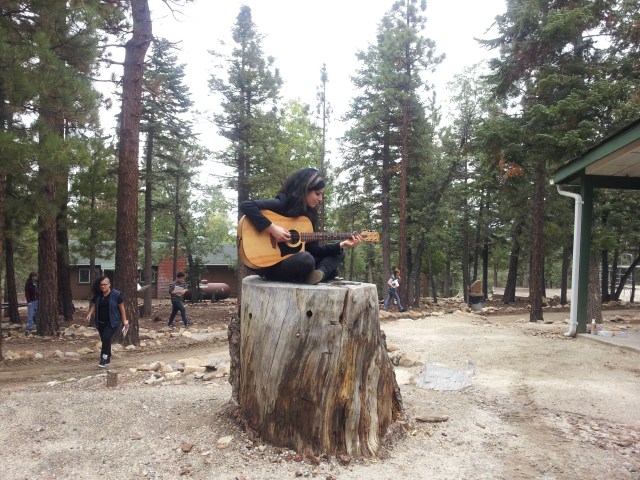 stef on a tree at camp autostraddle

It was so simple and obvious: I called, I told them I needed an appointment, and they gave me one. I didn’t have to prove that I was “gay enough,” I just had to pay for my sliding-scale sessions. My counselor and I had seven short sessions together, and in that limited time she was able to help me put things in perspective. I couldn’t fix my relationship, but I could fix the state of my life. She wondered if I might feel a sense of relief if I opened up to my family, and at long last I found myself in a place where I was ready to agree with her.

The actual discussion with my mom and dad was anticlimactic, just as I had known it would be. I took a huge breath, closed my eyes and explained that for the last six years I’d been dating both boys and girls, that I wasn’t attracted to any one gender, that it had been confusing and that I was sorry for keeping such a large part of my life so hidden.  They shrugged – “That’s all?” I suppose it helped put the last six years into some sort of perspective, but they mostly seemed relieved it hadn’t been anything more major. I recognize that I am very fortunate to have parents who are so open-minded. I can’t say that telling my parents instantly fixed anything, but it did open the door to being more honest and open, and being able to tell them about Autostraddle and how proud I am of the work we’re doing with A Camp has been refreshingly lovely.

Since then, I admit that I have still picked and chosen which relatives I will share this information with, which has less to do with confusion or shame and more to do with keeping some of my personal life personal. A lot of my extended family’s idea of what a successful life for me would look like is wrapped up in the idea that I’ll meet and marry a very rich Jewish man, stop working and start having babies somewhere in the suburbs. Sexual orientation notwithstanding, this has never been an idea that appealed to me, and has never been a realistic plan for my life. I’m open about my life to those I feel close to, but no longer feel panicked or pressured to justify myself the way I did in those early years.

Why was telling my parents so important? In part, I knew that our relationship was suffering from my lack of honesty, whether they were aware of it or not. Mostly, it was a matter of saying these things out loud to two people who’d known me literally since I was born, accepting it as a fact of my life and moving on. I had gradually become comfortable with being out to friends and coworkers as a matter of course, but to admit my status to the people who’d actually brought me into the world made the situation feel legitimate and real. A lot of this came from the Autostraddle readership, from meeting people in 3D at A Camp who were going through similar things and realizing that this community was inclusive enough to accept even weirdos like me. At times, not having the exact words to define what I am and am not has still felt like a struggle, but I no longer feel like those labels are necessary. I’m comfortable with the idea of answering questions when they arise, but at this stage of the game, I’m just trying to figure out who and what makes me happy and go with that — You Do You, natch.