Happy holigays, turtledoves! This week on Autostraddle, Sa’iyda Shabazz interviewed Jacqueline Toboni, Riese recapped The L Word, and Drew and Analyssa podcasted it! Kayla brought you the Yellowjackets trailer and an update on the second season premiere date. Nic wrote about Willow’s queers. And our TV Team released our list of favorite couples and favorite characters of 2022.

+ I CANNOT BELIEVE ABBOTT ELEMENTARY HAS GOT ME MELTING LIKE THIS OVER A STRAIGHT COUPLE. — Heather

+ Tara’s girlfriend was MIA this week on Criminal Minds, so the only gay thing happening is that my gay dreams are coming true and JJ might finally be rid of Detective Potato Head. This is…not exactly how I wanted it to go? Because now JJ will be sad, and sad JJ means sad Valerie, but it could…open certain doors. *eyebrow waggle* — Valerie Anne

+ It’s been long enough so I am sure y’all have watched all of Wednesday on Netflix at least three times. Miss Addams is not queer in the show—even though everyone wants her to be in love with her pastel princess roommate Enid, BUT THERE IS SOME ‘DYKING GOING ON AT NEVERMORE! Okay, maybe not AT Nevermore but one of the students Eugene (a homie of Wednesday) has two mommies and that is enough for me to think that there is more queerness to come. — Shelli Nicole 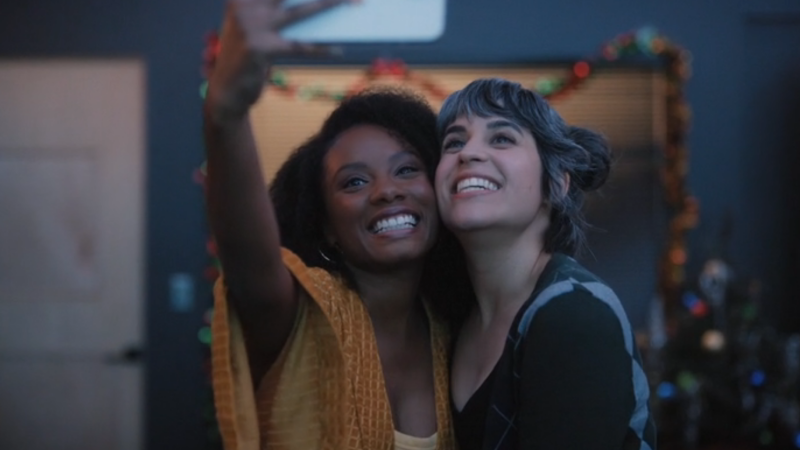 I love these cute nerds.

This holiday season, Rachel is going to meet Dana’s parents for the first time. And even though we don’t end up seeing that, because they stay late at work, I love the small ways they advance their relationship without isolating them in a little gay bubble separate from the rest of the plotlines.

Rachel tells Dana her and Brad’s new plan for a Christmas extension for the game, and when Rachel laments a change Brad made that she didn’t approve, Dana points out that Rachel is the one with rank here. So Rachel decides to do it her way, and it ends up working brilliantly. Dana is so proud of her. Brad makes some Star Wars references I don’t quite get because I’ve never warred nor trekked through the stars, but Dana does say, “I’m yoda, bitch,” which made me giggle.

The episode ends with a Christmas party and a big group sing and it made me very happy; I’m a sucker for a holiday episode.

We’re at the final six, and guess what, our girl Karla Cruz Godoy is STILL HERE! Of course she is. At the start of the episode, Owen is trying to drive a wedge between Cassidy and Karla. Karla goes to Cassidy to convince her that she wasn’t onboard with sending Cassidy home (even though, as we know, she was). Cassidy isn’t buying it so Karla proceeds to do an EMMY-AWARD-WINNING-PERFORMANCE OF CRYING REAL, ACTUAL TEARS! It’s amazing. It’s iconic. It’s Karla. Does it work? I’m not sure. But either way, we love the commitment to the bit. The challenge is a reward challenge, which Karla, Cody and Owen win. Over coffee and pastries, Karla puts her acting skills on full display in an attempt to convince both Cody and Owen that she is idol-less. It seems to have worked! Karla seems to be entering her villain era and you know what? I GUESS I’M ROOTING FOR THE VILLAIN!! 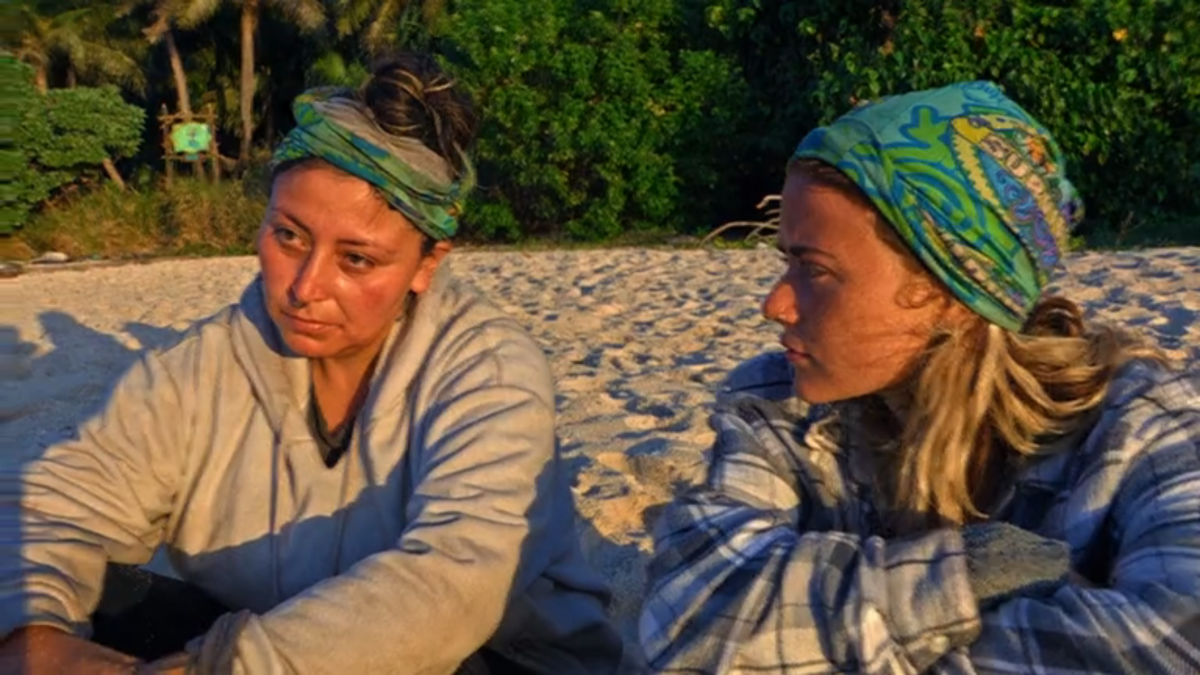 Unfortunately, back at camp, everyone seems to have aligned on the fact that Karla does have an idol. Oy vey! At the immunity challenge, Karla’s body seems to physically break down to the point that I am genuinely worried that she may be removed from the competition — but that doesn’t happen. Instead, Cassidy wins immunity. And then a LOT of strategizing back at camp happens — ultimately, Jesse emerges with the strategy that wins out. At Tribal Council, Jesse plays one of his idols — the one that is actually Cody’s idol, entrusted to him for safekeeping — to… protect Owen. This move, as Jesse predicted, makes Karla nervous, so she decides to play her idol to protect herself. The result? No votes against Karla or Owen count, and the four votes for Cody do count. Cody is out, Karla’s idol has been flushed, and Jesse still has another idol in his pocket that no one knows about. Jesse pulled off a hell of a move — but you know me, I’m still rooting for Karla.

Karla’s going to have to work very hard to get to final three — it seems like just about everyone, including the immunity-protected Jesse, is gunning for her. But by this point in the game, we know a few things about Karla: she’s a whip-smart, emotionally dexterous, challenge beast who never, ever, ever gives up. CROSSING EVERYTHING FOR YOU, KARLA!!! 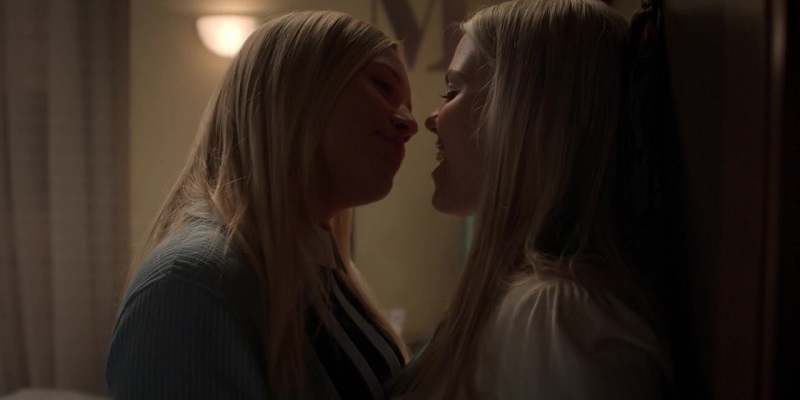 One thing we’ve known about Leighton Murray from the start: she’s never been lacking for confidence. That is, apparently, until now. Leighton’s met her match in Tatum — she’s found someone who she likes who is cooler than her — and she absolutely cannot stand it. But rather than admitting that, Leighton comes up with a plan to restore the balance in her new relationship.

“I’ve never dated up before so I am trying to find ways to maintain my high status,” Leighton admits to Whitney and Willow, after eschewing dinner plans with Tatum. Her plan includes walking away mid-conversation, not responding to Tatum’s Instagram stories, making her schedule seem busier than it is and taking four hours to respond to Tatum’s texts (or 24 hours if the text includes a question). It sounds preposterous but, somehow, it’s working?

But when Leighton meets Tatum for coffee between classes, things start to go awry. Leighton boasts about how busy she’s been since she got into Kappa and Tatum scoffs. She dismisses the entire Greek system as “basic and fake” and the revelation leaves Leighton scrambling for a way to maintain her high status. The Kappas are just one part of her social circle, Leighton points out. In fact, tomorrow night, she’s partying with her crazy party friends. Of course, Tatum calls her bluff: Leighton’s doppelbanger invites herself along and Leighton begrudgingly agrees. Now all she has to do is find some “crazy party friends” and a cool party for them to attend.

Thankfully, Jocelyn — who has been criminally underused this season — comes through for Leighton, scoring her an invite to a secret party at the Essex Art Gallery. But at the party, Leighton’s lies start to unravel and she’s forced to admit her deception. Tatum agrees that she’s absolutely cooler than Leighton but insists that she still likes her anyway (“Wait, so, you still like me after this? That speaks really poorly of you,” Leighton snarks). The pair kiss and it’s perfect…and it leaves Leighton so blissfully happy that she decides that she’s ready to come out to her father.

But in her bliss, Leighton forgets who her father is…because when he finally arrives at campus, he makes the entire visit about him. Sensing that he’s not in a good place, Leighton opts against coming out…only to run into Tatum and her father when they’re out to dinner. Turns out, their dads are old friends and Leighton’s dad invites Tatum and her dad to join them for dinner. Leighton panics and pulls Tatum aside to pre-emptively apologize. She explains that her ex-girlfriend, Alicia, had an issue with her being closeted but Tatum interrupts and reassures Leighton.

“It’s fine, there’s no timeline on coming out. Also? We just started dating so it’s cool…I gotchu,” Tatum assures her.

Though her fears are assuaged (somewhat), Leighton still tries to put a quick end to the dinner so she can go home and finish her math homework. Tatum’s dad ribs her for being such a nerd and encourages his daughter to find a smart girl like Leighton (Tatum responds, “Well, I am trying,” in a way that makes me swoon). Leighton’s dad laments that Leighton doesn’t open up to him like Tatum does with her dad. Leighton tries to push back but she can’t…not really…and so, instead, she comes out to her father for the first time, at dinner with her girlfriend and her father.

Her dad is taken aback and just repeats how cool he is with the revelation. Later, Leighton apologizes for adding more stress to his life but her dad insists that his reaction was about him, not her. He wonders what it says about him, as a parent, that he didn’t see this coming but Leighton notes that it just means she’s very good at being closeted. He asks if she’s happy and Leighton admits that she is. He reaffirms his love for her and praises her for finding someone that makes her smize like Tatum does.

Later, Leighton shows up to her suite’s dorm party with Tatum on her arm. They share the news of Leighton’s coming out with her friends, enjoy the party for a moment, and then retreat to Leighton’s bed for a more private celebration. And, OF COURSE, who would text at the exact moment that Leighton and Tatum hooking up? Alicia. 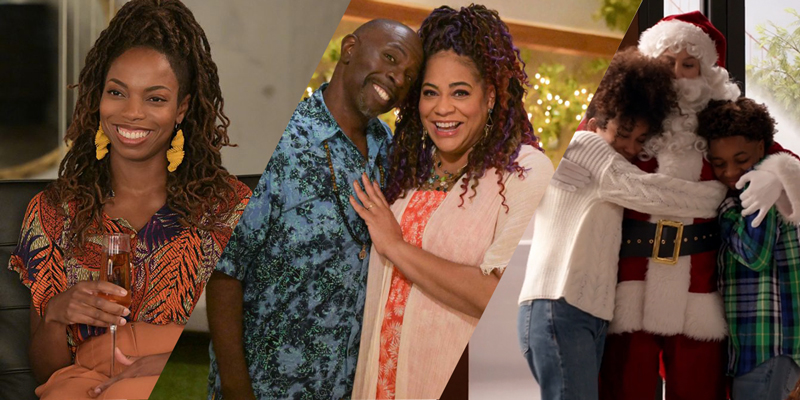 First, thank you Natalie who already covered this with a head’s up last week, but in case you’ve been missing Home Economics, we’ve recently met Denise’s parents. There are two things to know here. First, Denise (Sasheer Zamata) got some of the best guest casting in history when none other than Kim Coles (that’s living LEGEND Synclaire James of Living Single “woo woo woo” fame to you) rolled up as her mother, oh my god.

But second? Denise’s parents are poly? I’m sorry what. We love this. Well, I love this. I love a Black couple over 50 representing a healthy, polyamorous relationship. I love that they started this journey together after going to therapy (again, therapy is not often modeled for Black people, let along in their age bracket). And I love that they are out here clapping cheeks? Like yes, mom and dad have some healthy, grown ass sex.

You know who disagrees with me on this last sentence? Denise, who despite all of her progressive and sex-positive queer values, really struggles with parents exploring polyamory. And honestly, that’s fair because they are her literal parents and no one wants to think of their parents having sex. So I will give her this pass (also everyone hugs and makes up by the end of the episode anyway).

This week was Home Economic’s Christmas episode and even though it’s not Denise-centric, I did want to say how much I’ve enjoyed seeing Sasheer Zamata shine this season, because she is such a comedic talent. She’s had to do a lot of heavy lifting since Caitlin McGee (Denise’s wife, Sarah) has been pregnant, culminating in her being written off the last two episodes of the show so that she could have her baby in peace. But Sarah cameos at the end of the this week’s episode, dressed in drag as Santa Claus — a merry queer Christmas to all.