Netflix’s new teen comedy Moxie — directed by Amy Poehler, who also stars as the protagonist’s mother — aims for riot grrrl rage and zine-ready radical politics but falls short, coming off more like a glossy mag for girl power that is only loosely intersectional. It’s elevated by a stellar cast that manages to be charismatic and funny even when the script veers into stilted territory.

Based on a novel of the same name by Jennifer Mathieu, Moxie follows Vivian (Hadley Robinson), a teen girl struggling to find her voice as she faces down her junior year of high school. She has a lifelong best friend named Claudia (Lauren Tsai), but she mostly keeps her head down at Rockport High. Until she suddenly discovers feminism. This discovery is made in part due to Vivian unearthing the radical zines and Bikini Kill tracks of her mother’s youth. She also sees some of the inherent injustices at her high school with the help of new friends — mostly women of color — who are a little further along than Vivian when it comes to their relationship with feminism. 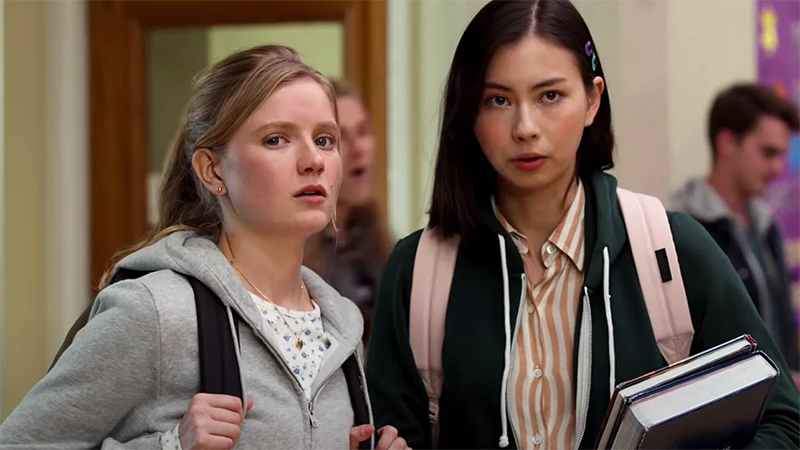 When Vivian sees captain of the football team Mitchell (Patrick Schwarzenegger) harassing new girl Lucy (Alycia Pascual-Peña), she knows that Mitchell’s behavior is wrong, but rather than confront him, she finds Lucy and advises her to keep her head down. As if Lucy’s actions are the ones that need to be corrected. She’s coming from a good place, but her advice is so steeped in internalized sexism and an inability to see Mitchell’s behavior for what it really is. She calls him annoying. Lucy points out that “annoying” hardly covers it. And by the end of the movie, it’s starkly clear that Mitchell’s everyday inappropriate behavior with girls at school points toward more explicitly abusive and violent behaviors. But Vivian’s not ready to see all that yet. So she simply tells Lucy to keep her head down, to play by the rules imposed by Rockport High’s sexist and racist social structures.

The school’s principal (Marcia Gay Harden) is even more nefariously dismissive of Mitchell’s obvious harassment of Lucy, instead insisting that Lucy change the language from “harassing” to “bothering” because she can’t be troubled with the paperwork the former might entail. Witnessing what Lucy and some of the other girls at the school are subjected to, Vivian decides to don her mother’s old enamel pin-laden leather jacket and start Moxie, a feminist zine calling for gender equality at Rockport High, where the football team consistently loses games but gets lauded with more money and attention than the women’s soccer team, which consistently wins. She remains anonymous as the zine’s creator, but a movement builds around Moxie, yielding a club of young feminists who are fed up and ready to fight. But that fight is often stymied by Moxie’s reluctance to give its characters and the script more bite. 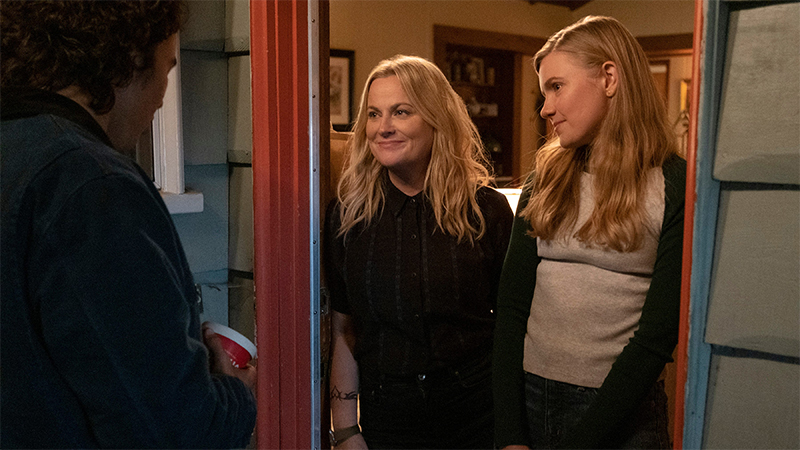 Vivian is both the movie’s hero and its biggest problem. She’s often a grating protagonist, which is no fault of Robinson at all. But Moxie preaches intersectional feminism while positioning the narrative in the point of view of a white girl who’s only just piecing together the deep-rooted impact of patriarchy. The development of her feminist consciousness feels simultaneously too hasty and overwrought. The cast is diverse, but the women of color exist mostly to help Vivian along her arc. And while the movie goes to painstaking lengths to explain the sexist implications of certain school policies — like the school dress code — it’s less willing to touch on the racism some of its characters experience. Mitchell’s harassment of Lucy — as well as the principal’s reaction to it — isn’t just sexist; it’s racist, too. Moxie occasionally names these things, and a standout moment in the movie comes when Claudia and Vivian have a massive friendship fight in which Claudia tells Vivian that Vivian can’t understand everything about her life and her choices because she’s white. But the movie remains muted and surface-level in its attempts to talk about race.

Moxie does nail it when it comes to depicting just how commonplace sexual harassment is in high schools. Throughout the movie, boys touch girls without permission. They make comments and jokes on girls’ bodies. Ike Barinholtz plays a teacher who’s well meaning but also completely blunders an attempt to express support for the Moxie movement because he’s afraid of saying the wrong thing. But the movie is occasionally too broad in its depiction of patriarchy, like when Vivian’s mom sits down to watch the news and a generic story about women coming forward with allegations about an unnamed man. The fact that this could be any number of real-life stories is part of the point no doubt, but it also feels heavy-handed.

But again, we’re watching this all unfold from Vivian’s perspective, and while everyone has to start somewhere when it comes to developing a feminist consciousness, Vivian’s politics just aren’t as radical as the movie insists them to be. Her revolution is pretty basic. 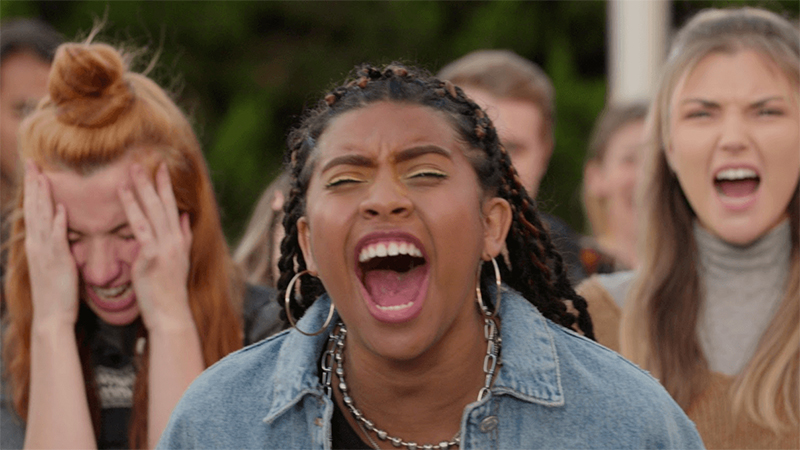 But then at the very end of the movie, Moxie gets a lot more serious about the misogyny at Rockport and the way girls have been silenced and zooms out way beyond Vivian. The Moxie movement suddenly carries great weight, providing a support system for one student to come forward about her sexual assault. It’s a sharp depiction of how supposedly harmless and normalized things — like the list made at the beginning of each school year where boys rank girls in categories like “most bangable,” “best rack,” and “best butt” — are actually extremely fucking harmful. But because the movie plays it so safe leading up to that weightier ending, it doesn’t all come together as powerfully as it aims to.

The whole point of Moxie as a movement at the high school is to promote collective action against the administration and the boys who are protected by the patriarchal systems that run rampant at the school. And the movie would work so much better if that collectivity were applied to its narrative and if the other characters surrounding Vivian were as developed and consequential to the story as Vivian is. It’s a delightful ensemble, but it’s not an ensemble movie. Some of the best scenes feature the whole Moxie crew. Some of the best scenes are the ones that feel less determined to make a point and instead just let these characters have personalities, like when Vivian and Lucy go on a thrift shop trip together and goof around in a way that points toward their growing intimacy. They feel like real teen girls here and not like merely mouthpieces for the messages Moxie wants to shout.

Lucy shares a kiss with soccer player Amaya (Anjelika Washington) at a Moxie party scored by riot grrrl jams courtesy of the Linda Lindas (they’re a real band—  check them out!), and I’d seen a screenshot of this moment on social media approximately a dozen times before watching the movie, so I was ready for the movie to be a little more queer than it actually is. I’m a little torn on this though, because on the one hand, there’s something genuinely refreshing about the fact that Lucy and Amaya enthusiastically kiss and then don’t require a whole Coming Out Arc — that they’re just allowed to be comfortably and joyfully queer. But it also feels like yet another missed opportunity for deepening the characters around Vivian. The kiss happens and then nothing else. And while Moxie refreshingly doesn’t make heterosexual romance the driving force of its narrative (rather, it really is Vivian’s friendships and the mission of Moxie that stay the focus), the only romance that gets any play at all is Vivian’s relationship with sweet skater boy Seth (Nico Hiraga). The queer girls get to kiss, but that’s all. We barely see them interact in any capacity after that. There’s also a trans student named CJ (Josie Totah) who gets a small subplot. All of these side characters are infinitely more interesting than Vivian, and the injustices they experience have much deeper implications than the more simple stuff like the dress code.

With a killer soundtrack its compelling cast, Moxie does have some charm to it, but it’s frustrating in its tepid and neatly constructed approach to a teenage gender revolution. Most of the movie lacks grit and fire. Vivian does eventually admit for herself that she lacks the moxie her friends have, but like much of the punchiness that finally emerges at the end of the film, it’s too little too late. If only Moxie as a whole felt more like the rage and reckoning encapsulated in one of the final images of the movie: a massive crowd of girls screaming at the top of their lungs.

Kayla has written 414 articles for us.