I believe makeup is magic – a chaotic neutral if you want to be precise about it. For so many people, it’s intimidating and scary and suffocating and heavy with the weight of expectations and failed fantasy. I was definitely one of those people for a long time. But somewhere along the way (read: my mall goth days at the age of the 13) I learned that blue lipstick could make boys recoil and make me look like an alien from Farscape. And so, I decided to change my tune.

As I came into my own as a queer baby, I started reading more into makeup as mythology, makeup as witchwork. I liked to use it to escape my crappy environment where I was being abused and I would paint myself up into a witch who could protect myself. Duochrome eyeshadow that looked like spacetime, ice queen pink lips that were as cold as my attitude to those assholes who would make Tyler Clementi jokes when I would get home from queer rallies. It wasn’t a lot, these efforts, but it was enough. The tradition of makeup as a means of coping and identity manipulation is of course embedded into the history of queer culture and makeup at large itself. Even if I hardly ever go out to parties in NYC, I owe so much of myself to the O.G. club kids like Leigh. Sometimes I’ll be playing with my makeup and come across a picture of Bowery on the internet afterwards, and we’ll look like siblings in eyeshadow. Your queer ghosts will always haunt you. I like that kind of ghost. The ones we’ve lost push us forward, you know?

In any case, so much of my life and work is dedicated to exploring means of survival and ways of coping with anxiety and shame in unexpected ways. Mostly it’s been a private enterprise, just me messing around before I go out, but over the past year I reached out more and wanted to build it into something my friends and chosen family could share with me. Many of us would sit around and do our makeup together, just a bunch of angry queers in a room screaming to Missy Elliot. It felt important to ritualize the results. Especially considering we were in the same place of emotional struggle; I’d written a series of questions called Therapy Sessions in Sephora last time I was in one and posted it on my blog. I got hundreds of responses to my questions within days. It felt really powerful, reading those results. I didn’t want that kind of potency to just sit there.

So I reached out to my friend Tayler – who’s now my best friend! – and we embarked on this photo journey together. Our work relationship came before our friendship but something about us just clicked because we got each other’s references and languages so much, and she pushed me on the rare occasions where I start doubting myself and need to give myself permission to go further. Most Important Ugly came out as the result. Over the next few weeks, I’m gonna guide you through the portraits and their stories, and how to get the looks if you so desire. If anyone would get these photos, it’d be you babes, right? My queer family. These are all pictures of us. They always were.

Before I get into these photo stories – how these photos come to be are as important as the end result. I wish I’d been able to record the interviews and condense them or something to go alongside the photos, but such is life, projects get away from you. I think it would have scared away the honesty in lots of the answers to my questions, too, so it was probably for the best. The premise of MIU is in the honesty of the interview answers at the end of the day. I ask a series of around fifteen questions to my sitter about identity and shame and anxiety and their history of makeup. It’s less like a survey and more of a conversation, of course. I adjust how I ask them depending on the person, and some of the interviews went on for hours, and some were about fifteen minutes total. My questions build and latch on to specific aspects of the person that they bring up themselves. If they have a lot of anxiety about gender, we explore that. If it’s about being Asian, we talked about that a lot. You know how in But I’m a Cheerleader, they talk about “finding your root”? My questions are about finding your roots so we can make a hard shell of them you can push through. 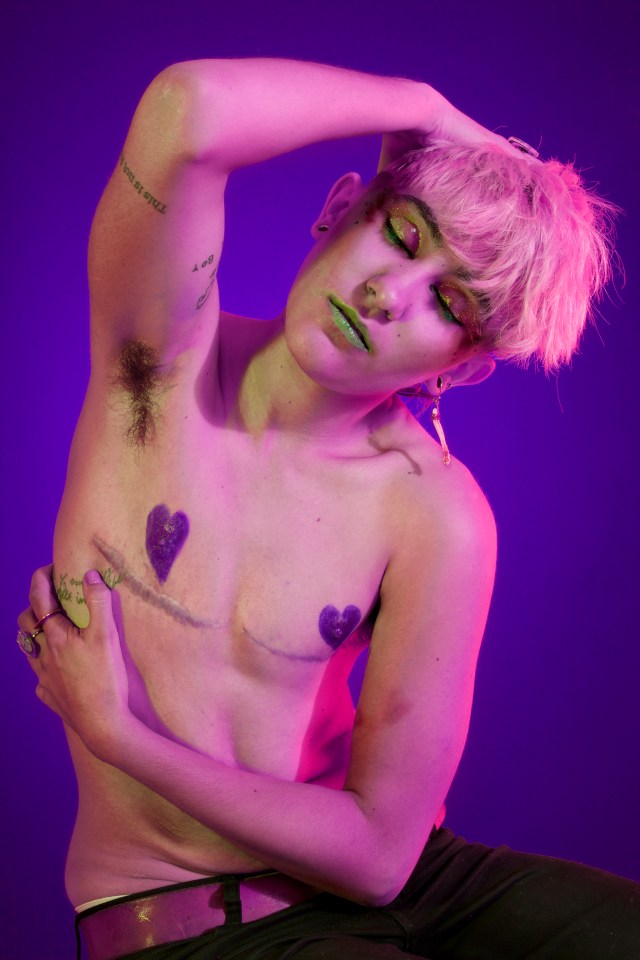 The first person who sat for us is our friend Mars, a trans artist and performer who is this literal angel. He gave me my first stick and poke shortly after this sitting! Anyway. This series was initially going to be called Girlmonstering and be for queer girls and women of color, but when Mars asked Tayler if he could be in it, because he liked the idea, we readjusted the premise. Because of course makeup isn’t just for girls, and we wouldn’t want to give the impression otherwise. Man, how much makeup theory do we owe to the trans community?!? So much! So of course Mars had to be in it, and of course he was the first, too. He’d actually just recently gotten his top surgery done so I was afraid about the nipple situation; I didn’t want to hurt him, but he was game. And I was so excited to femme-ify his scars, which are very beautiful. Also, I mean, I just love playing with nipples.

As for the makeup, Mars, Tayler, and I were all super into pop punk and scene for years and years and as you know, these genres have these very specific aesthetics. The neon bright makeup from Mars’ days in high school isn’t too far off from queer NYC club kid makeup now, which is the scene Mars is found in now. So I asked him to do half his face in a throwback to his baby queer self, and I took care of the rest. The kind of group nostalgia is something I think a lot of queer theory has in common, this desire for connection and home in identities. We find ourselves in each other and that is something we call love. Bringing Mars back to the first moments of gender play was an act of love to our old selves. Gloss on the eyelids could be a metaphor or whatever to a bright future, but I’m not going to fuck with you. I just really like gloss. Hahaha. 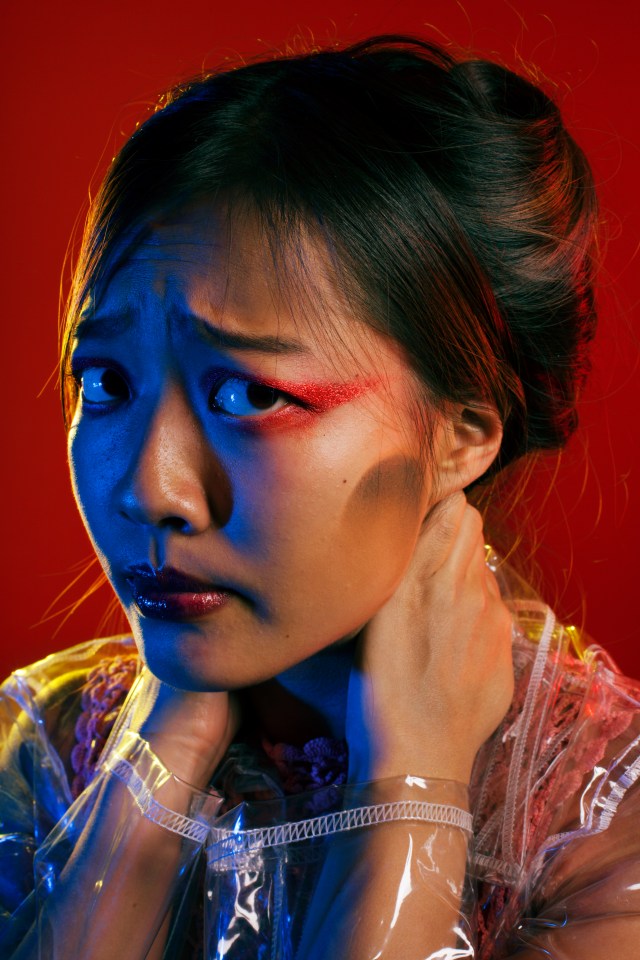 Melissa’s one of my muses; her face is so expressive and I don’t have a lot of Asian girls to connect with in my life so when I find one who really gets my immigrant and diaspora feelings I just want to hold them forever. Her photo was always going to be a homage to Sympathy for Lady Vengeance, this movie we both obsess over. I was super into red eyeshadow and makeup as resistance for maybe a year or two? I even did my first Autostraddle post on red eyeshadow. Melissa’s interview was a lot about Buddhism, diaspora and anger about visibility and acceptance and how she just started getting into makeup because of Lady Vengeance Looks and the stuff I was writing about. So I took all of that and made her into her own Lady Vengeance. I didn’t want to copy the film look, though, so I added that strange contour to emphasize her ridiculously amazing facial structure and also as a note to the idea of the world. Diaspora, continents, earth is round, etc. It’s a gradient of happiness between being understood and being assimilated. I’m glad we stuck with our original colors for lighting too (all of Tayler’s doing), they are good signals of the sadness and rage that comes with being Asian American, maybe about being othered in general.

In the next installment of this photo series, in which Autostraddle gets all the photos exclusively – I’ll talk more about monster culture and we’ll see two more photos in the series. I talked lots about Monster Culture in the zine that I made for the exhibition, I think you’ll all really dig it.

Hope your summers are going hot n heavy and great lately. May your makeup run only if you want it to. I’ll see you soon.