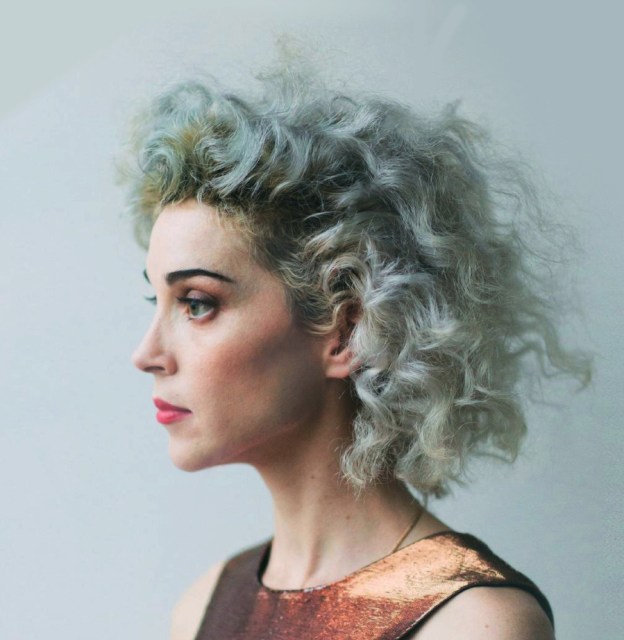 SISTER SAY A PRAYER FOR US

Another question Clark has historically demured on, and which people also keep asking anyway, is that pesky old gay-or-straight chestnut. “In the past, I’ve sent requests to interview Annie and was once told ‘she is not out,'” AfterEllen’s Trish Bendix said last week. When people refuse to answer questions about their sexuality, it’s often taken as a sign that they aren’t ready to be open about it: that they’re too private, that they’re afraid of personal or public repercussions, or that they just don’t want to take up the mantle. But maybe the bigger issue — with the “women in music” question, with the “are-you-or-aren’t-you” question — isn’t that people aren’t ready to be asked, but that the questions themselves are too reductive. In next month’s issue of Rolling Stone, reporter Jonah Weiner asks Clark “if she identifies either as gay or straight”:

“I don’t think about those words,” she replies. “I believe in gender fluidity and sexual fluidity. I don’t really identify as anything… I don’t have anything to hide, but I’d rather the emphasis be on music.”

And that’s one funny thing about the ceaseless questions — if you look at the music, so many of the answers have been there all along. 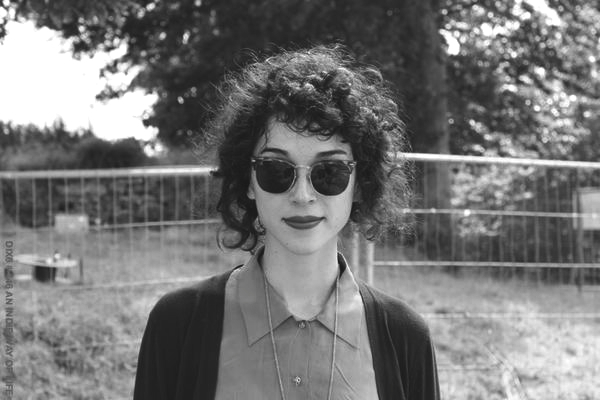 The cover shot for her newest, self-titled album has Clark rocking challenging eyebrows and an electric cloud of chrome-colored hair, arms draped over a pink throne. She has said that while writing the album, she was preoccupied by the Internet — she sings about TVs as windows and surfing Wikipedia on Ambien, and has included several songs about the apocalypse, as opposed to the one or two that popped up on previous albums. I’ve written elsewhere about how the album, despite this new focus, builds on themes Clark has explored from the beginning — alienation, anxiety, and the connecting power of art. But the more I listen to it, the more I think St. Vincent, and the trappings around it (the tour, the costumes, the press blitz), deal most of all with questions of identity and performativity — about how, as she put it in a recent Guardian column about Twitter, “we perform our identities in the analog and digital realm.” 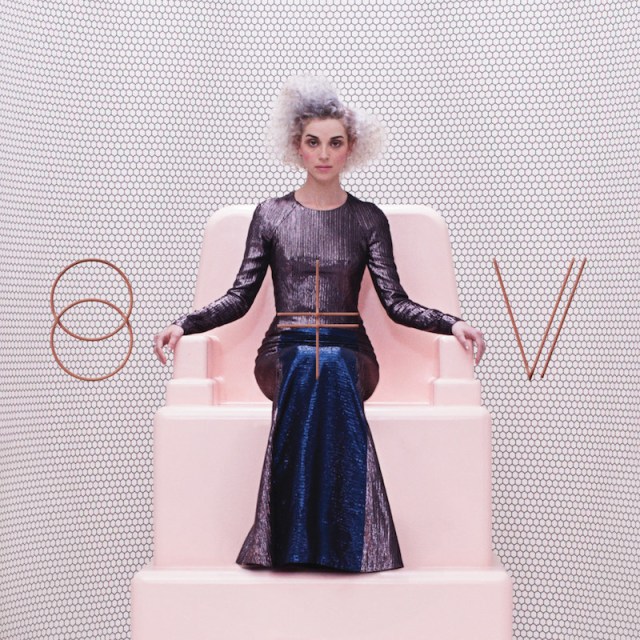 I can’t help it — whenever I see the phrase “perform our identities,” I think about gender. This dovetails quite nicely with the fact that whenever I think about St. Vincent I think about gender, and not so much in the women-in-music way. Critics love to point out Clark’s “control” over the St. Vincent project, her ability to keep her art “separate from her personal life” and to, as NPR’s Ann Powers put it, “avoid the confessional in her music,” something that is “not easy for a female artist — women in the arts are almost always assumed to be more naturally emotive than men, and less in control over what they produce. So it’s a huge accomplishment that St. Vincent has succeeded as a construct.”

This, too, has always struck me as reductive, bordering on false. You can laud her control over her project, sure. But I think it’s more accurate and interesting to view that control, including and especially the gendered aspects of it, as part of the project. This tension between performance and reality, between surface and depth, between what’s seen and what is, is present in her music, her videos, her performances — everything that has made her worthy of this much scrutiny in the first place. And as someone else who also “doesn’t really identify as anything” — who also considers this fluidity and these tensions an intractable aspect of who I am, rather than something that keeps me from being anybody — Clark’s music and her project seem, if not blatantly confessional, then certainly extremely personal. To call it anything else is to buy into the strictures she clearly strains against. 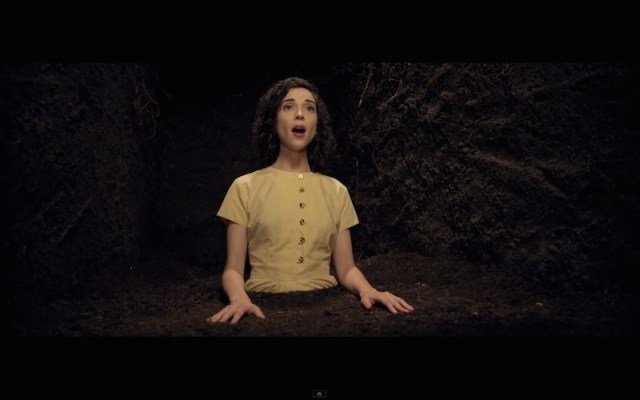 You don’t really have to be genderqueer to relate to this, either — you just have to pay a little bit of attention. Take her earlier videos, which lend themselves very well to the Feminist Commentary Drinking Game. Let’s start with “Cruel,” directed by the duo Terri Timely, which has Clark kidnapped in a convenience store and forced into indentured wife- and motherhood. When she fails to cook, clean, or waltz with enough enthusiasm, she’s ritually buried alive in the backyard. Did you catch those lyrics? “Can’t you see what everybody wants from you? / If you could want that too / Then you’d be happy”? These are the cries of anyone who has ever fought themselves rather than facing the omnipresent “everybody,” and I have a feeling that’s, well, everybody.

Next let’s go to “Cheerleader,” in which an enormous Clark, her face even dewier than usual, is on display at an art museum. When she tries to escape, she crumbles into pieces. This video works on lots of levels — it feels reductive to make a comment about the destructive power of the male gaze. On the other hand, she has no other hand, because it just cracked at the wrist and shattered against the ground. So there you are. 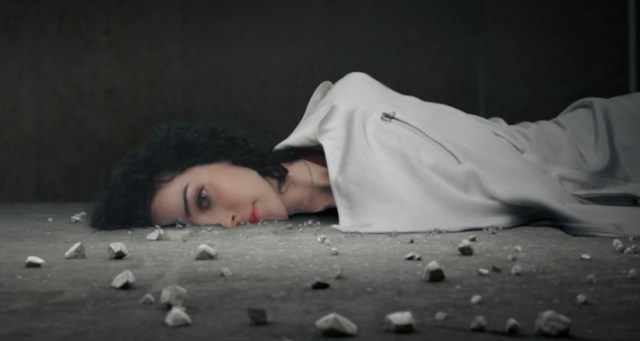 I’VE TOLD WHOLE LIES WITH A HALF SMILE

Time for a sharp-edged humor break, brought to you by incisive satirist Carrie Brownstein. “Laughing With A Mouth of Blood” takes place in Portlandia‘s feminist bookstore — a hilarious place, but still one that keeps the strictures of the world at bay by setting up even tighter ones (“Excuse me, sir!? This is an in-store, not a riot!”). Out of the wilderness and into the trap — there’s got to be a better way, right?

Next we’ll go to the video for “Marrow,” a trippy meditation on being followed in which Clark walks a shifting line between vulnerable and Messianic. The song was inspired by the Wizard of Oz, specifically the part where Dorothy meets the Wizard. Remember that? “Pay no attention to the man behind the curtain,” the man who fumbles with levers and smoke and green screens in order to project an image concurrent with his aspirations? This is probably the best time to mention that Clark named her first album, Marry Me, after that half-joking offer Arrested Development‘s Maeby Funke has to make to her movie studio bosses in order to mask her youth and inexperience, and project an image concurrent with her aspirations.

Her other videos, though less immediately obvious, still fill out a certain picture. “Actor Out Of Work” has a line of auditioners who vacillate, on command, between primped composure and hysterical weeping. Taken with lyrics that find menace in the distance between surfaces and depths (“you’re a boxer in the ring / with brass knuckles underneath”), it’s another exploration of performativity — the shiftiness necessary to make it day-to-day, from situation to situation, and the possibilities, danger, and power that come with the ability to do that. 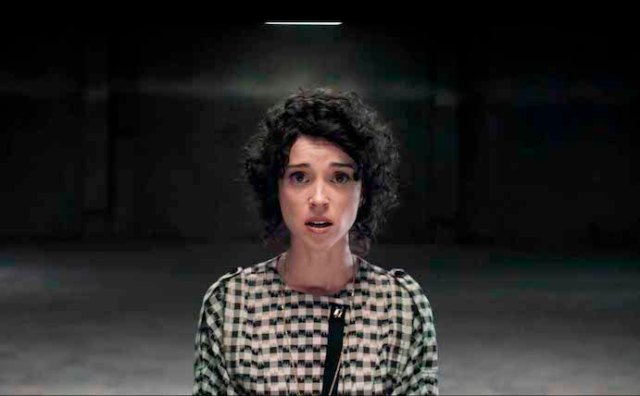 YOU’RE A BANDAGE, PULL IT OFF

Indulge me, and let’s take a minute to imagine videos for some of the songs that haven’t been given that treatment. What would a video for “Save Me From What I Want” (from Actor), with its escalating siren synths and its perfect birdcage of lyrics, have looked like? For newer joint “Prince Johnny,” in which she and the eponymous prince literally snort the Berlin Wall, that eternal symbol of failed division, before praying to an oscillating sound to be made into Real Boys and Real Girls? What about for “Chloe in the Afternoon,” which refracts an appointment with a dominatrix into a litany of surfaces, materials, and clothing? You can practically see it; you can definitely hear it.

It’s impossible to overstate how closely all this stuff clutches at my heart. I’m a smallish person, with a quiet voice and quiet behaviors that don’t always prove the best conduit for my (often) loud ideas and emotions. When I was a teenager, I’d spend entire Saturdays practicing White Stripes songs in my bedroom, which I pretended was a garage, on my plastic acoustic guitar, which I pretended was an electric, artificially screeching up into the high notes when I sang so that I’d sound more like Jack White, who has to reach farther for them than I do. When I watch Annie Clark be St. Vincent being Steve Albini, growling Big Black songs into a processed microphone, I think: so that’s what that game looks like, turned into a professional sport. Pedals, microphones, body language — all these things can make you even louder than you are in your own head. Juxtaposed with smallness, quietness, and yeah, female-bodiedness, they become louder still. And maybe that juxtaposition is who you really are. 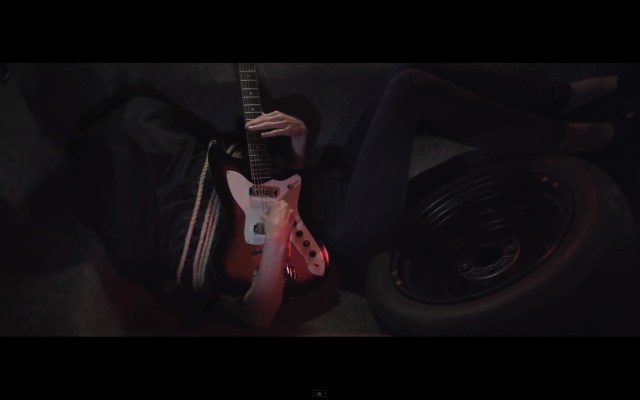 St. Vincent’s newest video, for “Digital Witness,” has her in heels and a futuristic hospital smock. As a regimented buzz happens around her — identical women push identical pencils, and a line of uniformed men marches through an enormous parking lot — she sits in the corner of an office or stands alone in the foreground. Her exact role is unclear (is she a patient? a prisoner? some kind of muse?), but there’s the unavoidable sense that something is about to happen, and she’s going to do it. “Get back to your stare,” she sings, smiling suddenly. “I care, but I don’t care.” If you happen to not identify as anything, you can harness these contradictions, use them to create and to critique. The more present the beauty, the more effective the beast; the more total the control, the more powerful it is when it snaps. And it always does.