1. Captain Crunch replaces Jack Sparrow in the fifth installment, Pirates of the Caribbean: Bitch Better Have My Berries.

2. Remake of The Lion King with Tony the Tiger. Same title.

5. The Coco Puffs bird in a remake of One Flew Over The Cuckoo’s Nest.*

6. Buzz the Honey Nut Bee in a Social Network rip off about Google Buzz’s failure.

8. Dig ‘Em The Honey Smacks Frog and the old WB frog team up for a Disney movie about an orphaned set of twins that decide to help keep Princess Tiana’s restaurant open by performing a modern day minstrel show.

9. Sugar Bear from Golden Crisp vs. Viral Bear in the style of Jason vs. Freddy.

10. Follow My Nose. A documentary on nose jobs gone wrong in the UK voiced by Toucan Sam.

11. Snap, Crackle, and Pop in the 5th installment, 3 Ninjas: Pimp Slap at Midnight

12. Film-noir piece about Boo Berry, a private eye that returns to earth to solve his widowed wife’s murder only to discover she’d been cheating on him for years…with a woman!

13. Fred and Barney in a prehistoric version of The Departed. 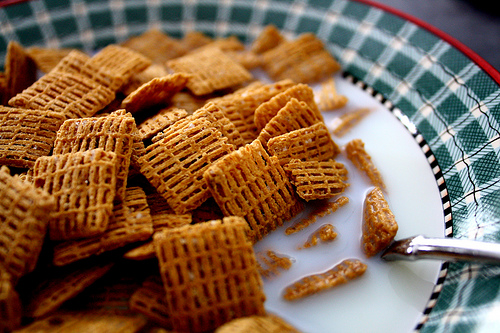 CHAMPIONS OF BREAKFAST, BREAKFAST OF CHAMPIONS