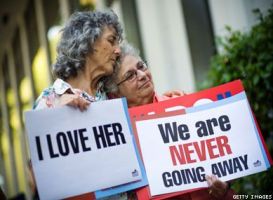 Doctors still don’t know what do to with gay and trans people, which we’ve known for a while now. But you may not have known it gets worse as you age!

A report published in the Journal of the American Medical Association in September found that med schools in both the United States and Canada dedicate little time — a median of five hours out of the entire curriculum — to LBGT-related topics. While almost all of the schools trained students to ask if patients “have sex with men, women, or both” in a sexual history, many schools did not discuss the issues with any depth. One third did not discuss them at all.

In an environment that can often include discrimination, patients are less likely to receive the care they need, and less likely to want to access care. Obviously, this is a problem.

Last spring, the US Department of Health and Human Services announced several changes in policies around the way that LGBT people are treated in the healthcare system. It pledged to create and adapt training programs to include LGBT-relevant topics, make it easier for LGBT people to find heath insurance, and evaluate ways to ensure equal treatment, among other things.

However, according to the New York Times, overarching changes are, for now, out of reach:

“It’s unlikely that most medical schools will change how they teach medical students anytime soon. Organizations responsible for accrediting medical schools and licensing physicians do not require that prospective doctors know about health care issues for lesbian, gay, bisexual or transgender patients. And because research in this area is relatively new, it’s difficult for medical schools to find experts qualified to teach.

Nonetheless, many still view the study results as hopeful because of the level of insight from most of the medical school deans. More than a quarter characterized what their school taught in regards to L.G.B.T. patients as ‘poor’ or ‘very poor,’ and almost half called their offerings only ‘fair.’ ‘This honest appraisal gives me hope that they might already be making plans to improve what they teach,’ Dr. Bailey said.”

But even if there are improvements in healthcare, they might be too late for gay seniors, many of whom return to the closet because of homophobic healthcare workers and care providers. Aging gay people are more likely to live alone and less likely to have partners, and are far less likely to have close relatives or children to call for help, compared with aging straight people. A report by SAGE found that LGBT people over 50 are also more likely to have disabilities and to feel stressed. Isolation and fear of discrimination are no help. In an interview with Xtra, Heather Bain, a Toronto community LGBT services coordinator, said:

“A big issue in the 50-plus LGBT community is how isolated people become when they are hiding their sexuality. If they don’t feel they can talk to other people about being gay, they don’t engage in programs or engage with other people.”

“Despite recent policy advances, LGBT older adults still face significant barriers to successful aging, such as poor health outcomes, a lack of economic security, social isolation, and unequal treatment under the law and in programs aimed at aging populations.”

Ultimately, recent improvements in healthcare are good, but not good enough.