Welcome back to Boobs on Your Tube, coming to you on a Saturday morning to make room yesterday for the glorious Autostraddle holigay, “Is Love a Lie?” Day! Let’s see what happened on our screens this week!

On RuPaul’s Drag Race, Drew proudly declared herself a lover of loud insecure queers everywhere. Carmen watched The Equalizer premiere and it inspired her greatest work of art, entitled “This Is Queen Latifah…” full of images of our Queen riding motorcycles, punching men, and all around being the action hero of our dreams  (our favorite? “This Is Queen Latifah Beating Up Dangerous Men in a Closed Down Amusement Park For Fun”). Heather gifted us with an exclusive clip from The World to Come, which features a couple of frontier lesbians hungry for food and each other. Then it was Holy Time Jump, Batman! season on Riverdale, and Kayla caught every detail. And to wrap things up just in time for Valentine’s Day, Valerie Anne has summarized The 10 Times Queer TV Taught Me Love Is a Lie. So say we all.

+ It’s time to head back to the Coterie! Good Trouble returns to our screens on Wednesday! If you missed any of season two, you can catch-up on Hulu or via my recaps. — Natalie

+ I know WandaVision isn’t technically canon-ly queer (yet??) so I’m not going to actually write about it but if you want to TALK about it with me in the comments, I’m loving the show and I! have! feelings! — Valerie Anne

All American 304: “My Mind’s Playing Tricks On Me” 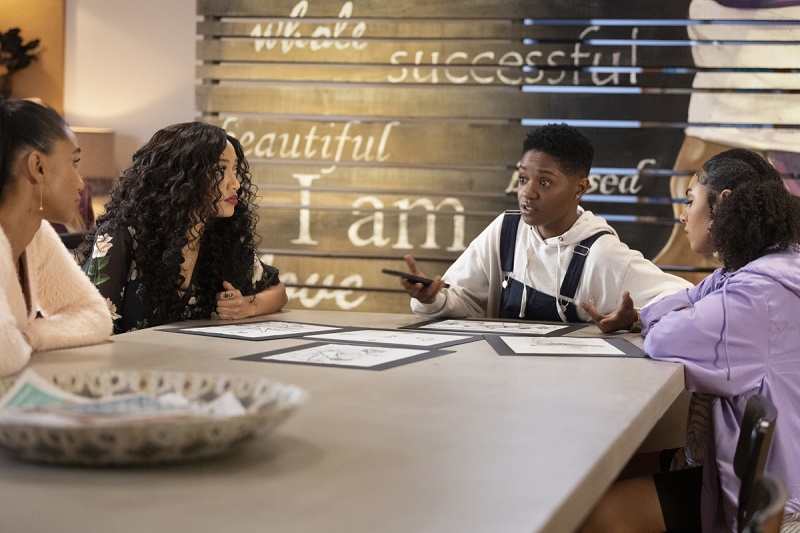 Coop’s been winning lately: her successful summer tour put her on the map and the streets are clamoring for new music… so much so that even an impromptu writing session with Patience at the Slausson Cafe goes viral. But her success in music hasn’t translated to success in the classroom and the school’s guidance counselor is not having it. She tells Coop that her truancy means that she doesn’t have enough credits to qualify as a senior. The counselor urges Coop to meet with her teachers and make up her classwork or she’ll have to repeat her junior year.

Spencer appreciates the seriousness of the threat and worries that Coop won’t be able to graduate. But Coop is unmoved: she doesn’t need a degree to be the next Kendrick Lamar, she claims — which is ironic because the actual Kendrick Lamar was the first in his family to graduate high school and finished with a 4.0 GPA. Spencer refuses to let Coop drop out of school but she’s insistent: right now, her priority is her music.

The school counselor also enlists Patience in the effort to get Coop back on track. Patience urges Coop to find a way to balance school with music and Coop agrees, but in that way that almost confirms that she’s definitely not going to take Patience’s advice. Layla arrives just in time to steer the conversation back to music. Coop and Patience want to shoot a music video to go along with their new song, but without Patience’s release from JP’s label — which Layla’s father refuses to authorize — she can’t be in the video. The pushback makes Layla second guess whether she’s cutthroat enough for the industry, but Coop reminds her that doing things her way has led to wins already and she should stay true to who she is.

Meanwhile, Spencer’s working through his own ish: after discovering that the loss of sensation in his arm wasn’t caused by a lingering physical issue, he takes Layla’s advice and starts seeing a sports psychologist. Coop doesn’t see the utility in it — they’ve been each other’s therapists for years — but Spencer recognizes that he needs real help to get over his mental block. The psychologist pushes Spencer to find his stuck point, the defining moment from the shooting which prevents him from recovering psychologically. After going back through the events from that day, Spencer finally discovers his stuck point: his best friend, Coop. 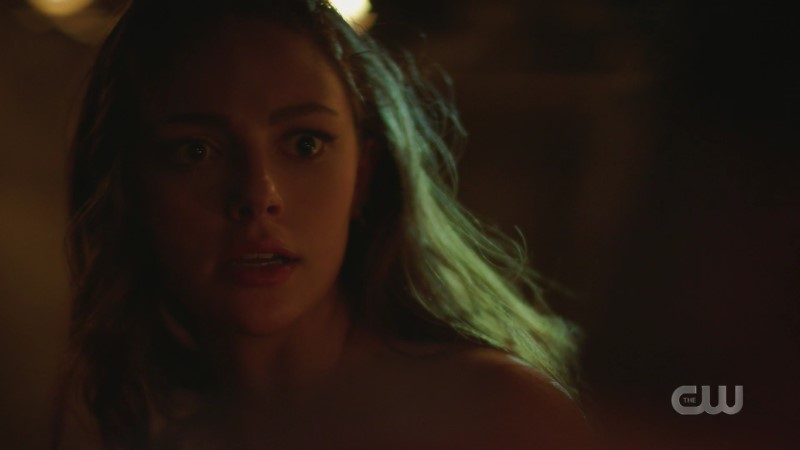 I’m getting real tired of the Landon Kirby Show. This show is called Legacies, because the characters on The Vampire Diaries and The Originals left behind legacies in the form of children and those children are Hope, Lizzie, and Josie. And this season Josie has been magic muzzled, Lizzie has been reduced to pining after an albeit wonderful boy, and Hope has been reduced to pining over a boy who is not only as interesting in mud but who is actually literally the child of mud. And then! To make matters worse! In this episode, we fell into the trap of a trope I thought we left behind, which is Teen Girl Has Consensual Sex With Her Age Appropriate Significant Other Then Is Immediately Punished For It. Which I’m sure has a snappier name but I’m too mad to think of it right now. Hope was still in her post-coital afterglow, literally talking about how she is happy for the first time, and then Landon melts into a puddle of mud. Yes, this is what I’ve been asking for this entire season, but no this is not how I wanted it to happen! Landon had two other fake-out deaths in this episode alone that would have been better! Also it’s like his 900th death on the show (all of which were JUST to torture Hope) and none of them ever stick so at this point it’s the boy who cried death and frankly I’m sick of it. Give me back the show that was about a SuperSquad of three queer teen witches and their best bois and leave all this mudboy crap in the abyss puddle it came from.

Nancy Drew 204: “The Fate of the Buried Treasure” 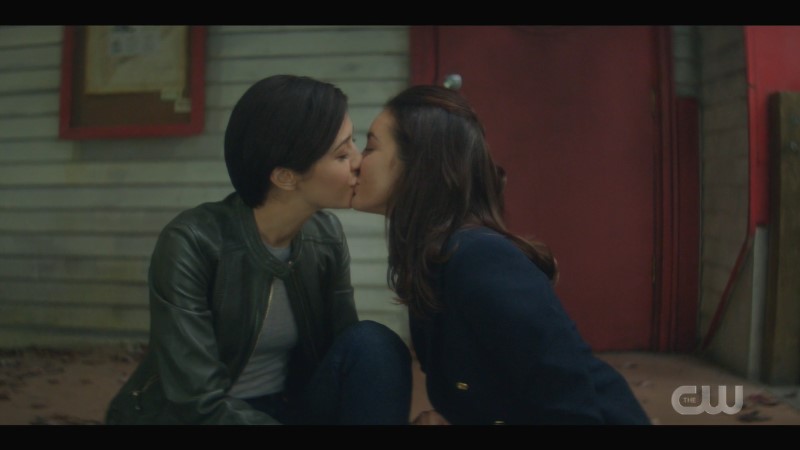 Don’t worry even though this perfectly heathy, frankly very adorable pairing is canon, I still also ship Bess and Nancy like the pile of trash I am!

Lisbeth finally made her triumphant return to Nancy Drew. She acknowledged that she and Bess have a bit of a Juliet/Juliet thing going on because of her job and the tension it causes with the Marvin family, but Lisbeth is willing to fight for them if Bess is. Bess is pretty sure she’s going to die in the next 24 hours, but doesn’t know how to tell Lisbeth that, so she just agrees she wishes they could make it work.

She also agrees to go to dinner to meet Lisbeth’s parents, but despite being encouraged by Nancy to tell her girlfriend how she feels, Bess bails last minute; she can’t bear to say goodbye.

This episode also had some BONUS gay, and OLD-TIMEY LESBIANS at that, because we found out that the aglaeca was once named Odette, who married into the Marvin family, and was robbed and murdered, thus her vengeful spirit. Nancy follows a series of clues and discovers that Odette was actually forced into her marriage into the Marvin family and she knows this because a woman named Agnes discovered love letters between Odette and a woman in England.