At the Band of Thebes, 87 authors selected their favourite LGBT books from 2012. The authors include Ivan Coyote (who picked The Chronology of Water), Farzana Doctor (who picked Ties that Bind: Familial Homophobia and its Consequences), Justin Hall (who picked Transposes), Jill Malone (who picked Are You My Mother?, which several other authors picked as well) and Lori Ostlund (who picked Love, In Theory).

The Millions has an excellent series of a year in reading, featuring an incredible selection of contributors that include Zadie Smith, Jeffrey Eugenides, Maria Popova, Roxane Gay, Susan Orlean and many more.

New queer books in December include Art on Fire, by Hilary Sloin, Who’s Yer Daddy?: Gay Writers Celebrate Their Mentors and Forerunners, edited by Jim Elledge and David Groff, Best Lesbian Erotica 2013, edited by Kathleen Warnock, The Three, by Meghan O’Brien, A Simple Revolution, by Judy Grahn, and many more. 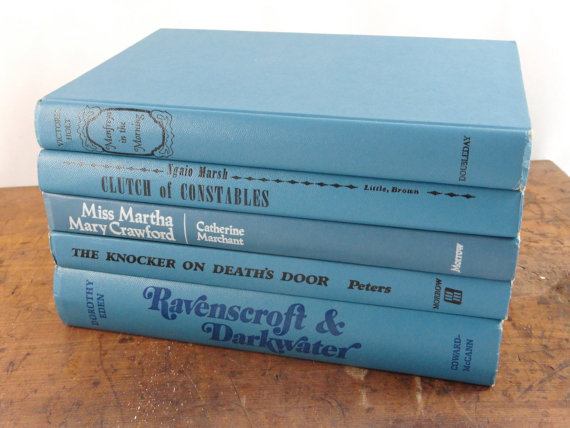 The Atlantic has a list of the best typos and mistakes of the year. This blog of unnecessary quotation marks is equally horrifying.

At Racialicious, Phuc Tran writes about grammar, identity and the dark side of the subjunctive. Tran discusses what happens when someone who comes from a language doesn’t have the words to talk about something that could have happened (Vietnamese) suddenly gets access to a language with a subjunctive that allows for multiple possibilities (English), and what that means.

This primer on 20 years of black lesbian cinema, by Salamishah Tillet, is essential reading.

This month’s Emily Books pick is Nine Months by Paula Bomer, which is about what happens when Sonia leaves her husband and her children and her life to find the version of herself she left behind.

At the Rumpus, Elizabeth Bastos writes about Anne Carson’s Autobiography of Red and its distinct lack of floozyness. 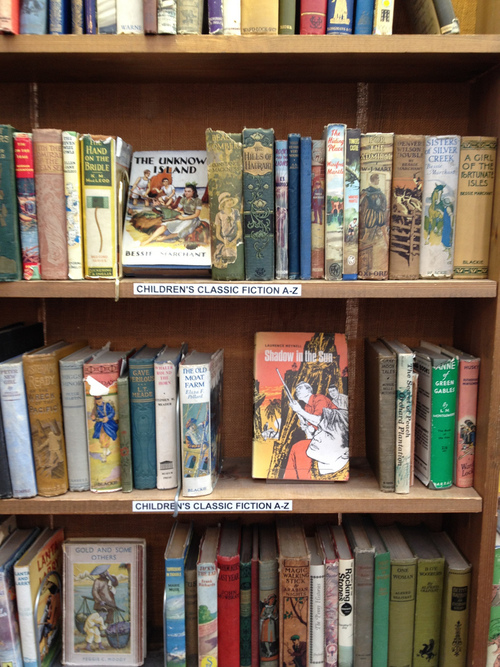 When books are beamed into our heads, we’ll all feel nostalgic for readers.

In the NYT Sunday Book Review, JD Biersorfer reviewed modern ways of reading or experiencing Shakespeare, including ebooks, multimedia editions and the app for that.

Casey the Canadian Lesbrarian reviewed Rae Spoon’s First Spring Grass Fire, arguing that the collection is full of emotional stomach punches and is “unrepentant, brave and moving.” (We also reviewed it.) 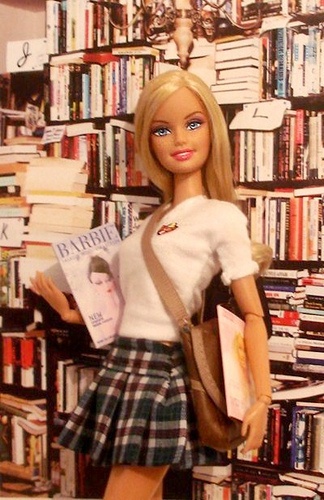 At the New Yorker, Abigail Deutsch writes about bookshelves and books and what they say about the people who own and read them:

“Books tell not just the stories of their characters but also of us—of our tea, of our muffins, of that rainy Thursday we devoted exclusively to tea and muffins. Perhaps that’s why William Hazlitt wrote that revisiting books can ‘transport us, not over half the globe but (which is better) over half our lives, at a word’s notice!'”

Andrés Colubri helped to create a visualization of the emotional history of books at the Garden Library for Refugees and Migrant Workers in South Tel-Aviv. The library is outdoors and easily accessible, and is classified according to emotional categories (amusing, bizarre, boring, depressing, exciting, inspiring and sentimental). The resulting organizational system lets readers help organize the library and find new ways to explore it.

A short story from Naked, by David Sedaris, is coming to Sundance.

At Lambda Literary, Paige Cohen interviewed Emma Donoghue, author of Astray as well as several novels, short story collections and literary anthologies. Sara Rauch reviewed The Dream of Doctor Bantam by Jeanne Thornton (so did we). TT Jax wrote about the literature at the end of the world.

Speaking of the end of the world, a collection of stories from the San Diego based art collective So Say We All looks at your last night on earth. 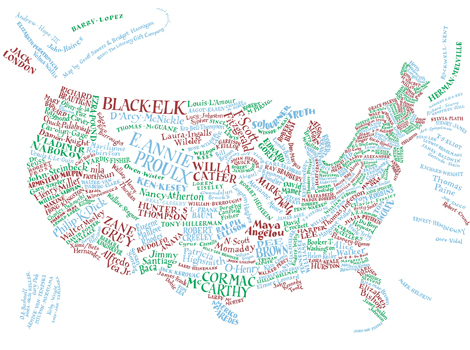 British bookseller and cartographer has created a literary map of the United States. He also did one of Wales.

This animation charting the evolution of the early modern collections at Harvard by place of publication, volume and year is fascinating.

Still doing holiday shopping? Check out our literary gift guides: 59 Gifts For Book-Lovers (Besides Books) and the Things I Read That I Love Gift Guide.

Goodreads has a flow chart of books to read next if you identify as a hipster.

At the LA Review of Books, Jenna Brager writes about reinventing childhood classics and A Wrinkle in Time: The Graphic Novel. At Brain Picker, Maria Popova lists the best children’s books of 2012 and discusses what makes a great picture book. At Slate, Nicholas Day writes about the absurdism of picture books. 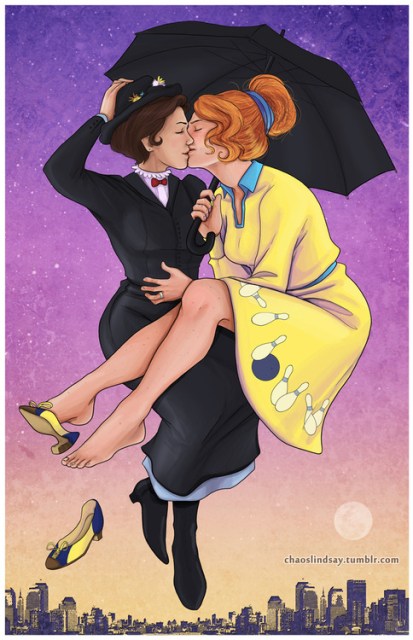 Mary Poppins and Miss Frizzle fanart: this exists. Via chaoslindsay.tumblr.com.

T Cooper’s Real Man Adventures was released earlier this month. Amanda Hess reviewed it for Slate. Watch the trailer or check out this excerpt from McSweeney’s:

Blessed, right? What everybody wants to be, when it comes down to it. I earn 25 percent more than women, for some unexplained reason statisticians have never seemed to be able to make sense of on paper. I don’t get beaten and sexually assaulted, traded and married off, shrouded in black fabric or have my genitals mutilated, and I am not readily found removing my clothes for members of the opposite sex in ubiquitous venues open all hours of the day. (Okay, Chippendales, but no lady actually has fun at Chippendales or ever returns even if she has a little fun in Vegas once.) I am the perennial buyer, never the seller. And if she’s not selling, I can usually just take, one way or another. History tells me so.

If you woke up one day — or no, say you’re an embryo before it figures out whether it’s going to have a Y chromosome or not, and you can decide what you are going to be; you could go to the public library, take all the dusty books off the shelf and really get a good look at all of time and see who’s generally come out on top — what would you be?

Don’t forget to check out all the awesome book-related things we published recently: Cara wrote about the Associated Press and the word homophobia and about reading Sappho. We started “My Top 8 Favorite Authors,” a column about the authors who made us the people we are, and Riese, Hansen, Malaika and Ali shared theirs. We also wrote about the 100 best lesbian fiction and memoir books of all time. 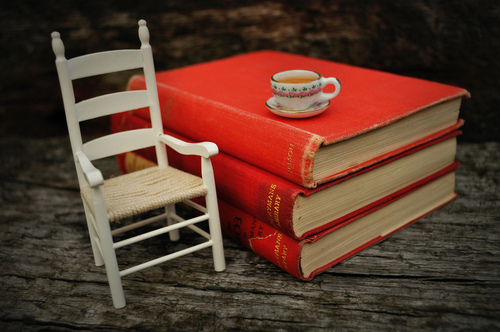 December 13, Toronto: This week’s the Beautiful and the Dammed, an open mike poetry cabaret at Glad Day Bookstore, will be hosted by Duncan Armstrong. Sign up starts at 7 p.m.

Now to December 20, New York: The Bureau of General Queer Services Division wants to create a queer bookstore and event space in New York. There are seven days left to donate.

Now to December 16, San Francisco: The New Conservatory Theatre Centre is running The Submission, a play about a gay author that explores affirmadtive action and bias in literary contests. Saturdays at 8 p.m., Sundays at 2 p.m., $25-$45 (25 Van Ness Ave. at Market, lower level). 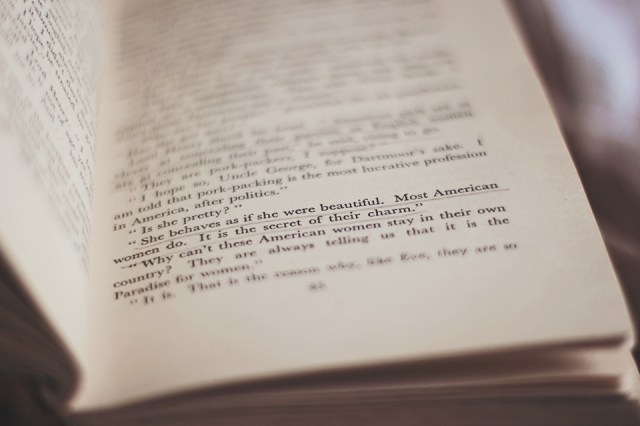 Riese: Malinda Lo‘s YA novel Ash shows up a lot on our lists of important lesbian books and I felt like it’d be in my best interest to finally read it, and so I did and it was good, duh, although I’m usually not a big reader of fantasy novels. Regardless of any physical descriptions offered up in the book, however, I imagined the Huntress to be Brienne of Tarth the whole time. Then I read Joan Didion‘s Where I Was From, which wasn’t what I expected, but I learned a lot about the history of California and it actually helped me put my own presence in a historical context, which I always enjoy.

Carolyn: Last week I read The Middlesteins, by Jami Attenberg, which is about a family whose matriarch is trying to eat herself to death. I found out about the book via an interview Michelle Dean had with Attenberg for the Awl, mostly because I am perpetually intrigued by anyone who manages to quit their day job and, specifically, the work that comes from them doing so. I also read Mr. Penumbra’s 24-Hour Bookstore, by Robin Sloan, which I loved — it’s a bit like The Da Vinci Code, if The Da Vinci Code had been (a) based about a typographic conspiracy and (b) well-written and enjoyable. Mr. Penumbra pings many of my interests: there are bookstores and puzzles and conspiracies and people discussing the tension between old and new technologies and lots of typography references and the cover even glows in the dark. If you’ve read about it but aren’t sure you want to read it, start with the short story it started out as.