If you or somebody you love is a fan of our recurring Things I Read That I Love feature, in which I share my favorite longform picks of the week, then this gift guide is for you. 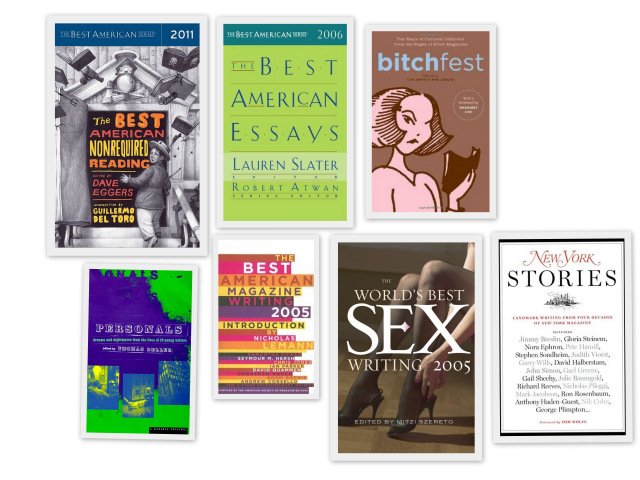 Personals: Dreams & Nightmares From The Lives of 20 Young Writers (1998), edited by Thomas Beller – This book is heralded as “an edgy and provocative collection by some of America’s most talented young writers” and was one of a few books that conspired circa 1999 to make me wanna write creative non-fiction. 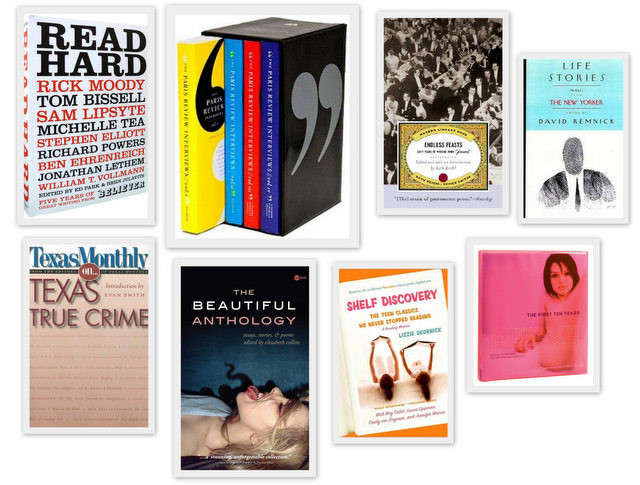 On Crime from Texas Monthly: Texas True Crime (2007) – All the best crime stories come from The Texas Monthly. It’s true.

On Beauty from The Nervous Breakdown: The Beautiful Anthology (2012), edited by Elizabeth Collins – “An eclectic, international combination of established and emerging writers and artists all riffing entertainingly on the theme of beauty.”

On Sex from Nerve.com:  Nerve: The First Ten Years (2008) – Ten years of literate smut is collected in a “stunning retrospective” which “celebrates Nerve’s impact on popular culture with its stimulating essays, interviews, fiction, and photography.”

On All Things Literary from The Believer: Read Hard: Five Years of Great Writing from The Believer (2009) – The best essays from “one of the smartest, weirdest and funniest magazines in the country” including work by Michelle Tea, Jonathan Lethem and Rick Moody.

On YA Novels from Jezebel: Shelf Discovery: The Teen Classics We Never Stopped Reading (2009) – This paperback, culled from Jezebel’s Fine Lines column, features funny writers talking about the works of Judy Blume, Beverly Clearly, Norma Klein, Louise Fitzhugh and so many more. 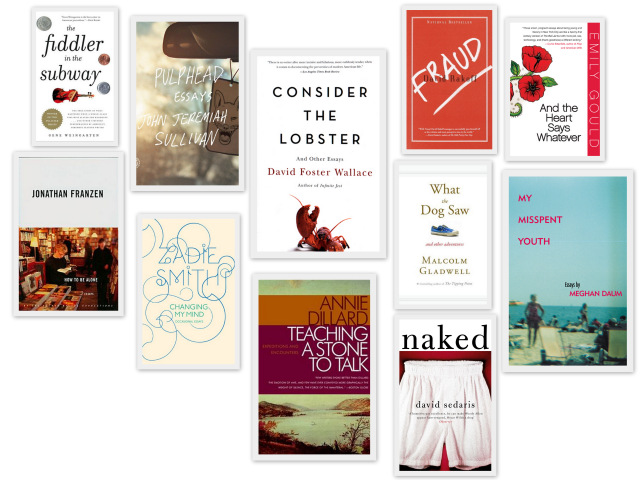 Consider the Lobster and Other Essays by David Foster Wallace

How to Be Alone: Essays, by Jonathan Franzen

What the Dog Saw: And Other Adventures, by Malcom Gladwell

And the Heart Says Whatever, by Emily Gould

Teaching a Stone to Talk: Expeditions and Encounters, by Annie Dillard

The Fiddler in the Subway: The Story of the World-Class Violinist Who Played for Handouts. . . And Other Virtuoso Performances by America’s Foremost Feature Writer, by Gene Weingarten

Books That Started Out As Longreads 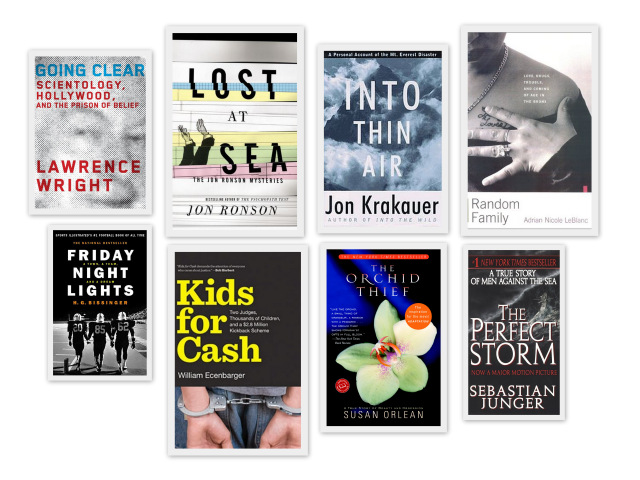 Random Family: Love, Drugs, Trouble, and Coming of Age in the Bronx (2002), by Adrian Nicole LeBlanc, from the 2000 New Yorker article entitled Landing From The Sky.

Into Thin Air, by Jon Krakauer, from the September 1996 Outside Magazine article by the same name.

Kids for Cash: Two Judges, Thousands of Children, and a $2.6 Million Kickback Scheme, by William Ecenbarger, began with Ecenbarger’s investigation on this issue for The Philadelphia Inquirer  including an article we read in a past TIRTL that I can’t seem to track down.

Lost at Sea: The Jon Ronson Mysteries (2012), by Jon Ronson, includes heaps of previously published articles, including some that have appeared in prior editions of TIRTL, such as The Guardian‘s 2011 piece Lost at Sea (about the girl who vanished from a Disney cruise ship) and the July 2012 GQ article Amber Waves of Green (talking to Americans on both ends of the economic ladder).

The Perfect Storm (1997) by Sebastian Junger, from this 1994 Outside Magazine article, “The Storm.”

Friday Night Lights: A Town, A Team And A Dream (1991) by H.G. Bissenger from the 1990 Sports Illustrated article by the same name.

Going Clear: Scientology, Hollywood, and the Prison of Belief (2013) by Lawrence Wright -This actually doesn’t come out until January, but I wanted you to know about it anyhow because this 2011 New Yorker piece, Paul Haggis Vs. The Church of Scientology, is one of my favorite longreads, and you should put this on hold if you get a gift card.

If you love Things I Read That I Love, you probably have a lot of feelings about Important Shit such as prison reform, education, unemployment, politics, and so forth. These recently-released books by journalists tackle tough topics: 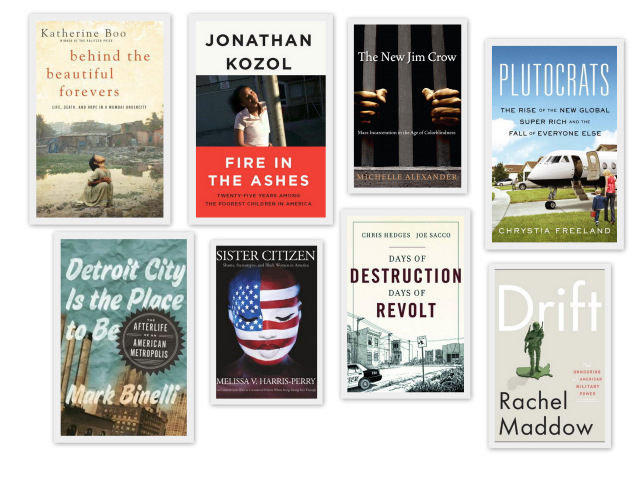 Plutocrats: The Rise of the New Global Super-Rich and the Fall of Everyone Else (2012), by Chrystia Freeland

Detroit City Is the Place to Be: The Afterlife of an American Metropolis (2012), by Mike Binelli

Days of Destruction, Days of Revolt (2012) by Chris Hedges & Joe Sacco (It’s about the nation’s “sacrifice zones” – “those regions where, in the authors’ view, corporate greed has run wild, and the locals have suffered.”)

The New Jim Crow: Mass Incarceration in the Age of Colorblindness (2012), by Michelle Alexander

Fire In the Ashes: Twenty-Five Years Among the Poorest Children in America (2012), by Jonathan Kozol

Drift: The Unmooring of American Military Power (2012), by Rachel Maddow

Behind the Beautiful Forevers: Life, Death, and Hope in a Mumbai Undercity, by Katherine Boo (on byliner) 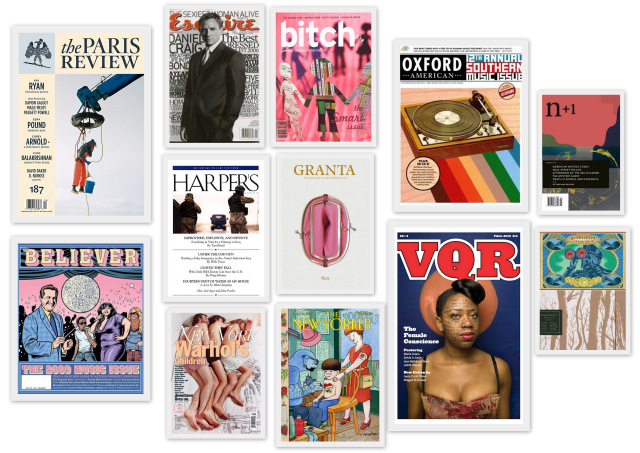 n+1 ($40 for one year of print and digital) – Consistent source of high-quality writing and criticism on topics relevant to our interests. Billed as a “print magazine of politics, literature, and culture founded in 2004 and published three times yearly,” its stuff has appeared regularly in TIRTL and its evolution over the past eight years has been delightful to observe.

The Paris Review ($40) – The most legendary of all the literary journals, The Paris Review publishes a mix of fiction, non-fiction and interviews and wins a million awards every year. It was the first publication to publish Adrienne Rich, Phillip Roth, V.S. Naipaul, Jack Kerouac, Mona Simpson, T. Coraghessan Boyle and Rick Moody and the first to publish landmark works by Jim Carroll, Italo Calvino, Jonathan Franzen, Jeffery Eugenides and Donald Barthelme.

Bitch Magazine ($24.95)- Just today I got a gift subscription of Bitch Magazine for Laneia, and I feel great! In fact, MY new issue of Bitch arrived today shortly afterwards, as if on cue! I might hop around the house like a bunny now! Anyhow, every issue Bitch serves up four or five feature articles on their “feminist perspective on pop culture,” mostly unavailable online, and even their front-of-book stuff is awesome. Plus, it’s a non-profit so it’s good to support in general.

The McSweeny’s Quarterly Concern ($55) – Dave Eggers steers this ship, which once upon a time only published things that’d been rejected by other things. Now they just run lots of awesome things, all the time, with a wildly different format and overall situation each time.

The Believer ($45) – The best contemporary literary writers are always writing for The Believer, for serious. They publish good stuff regardless of length and only review books they actually like!

New York Magazine ($29.97) – My favorite magazine and the only one I usually read cover-to-cover.

Granta Magazine ($48) – “Granta does not have a political or literary manifesto, but it does have a belief in the power and urgency of the story, both in fiction and non-fiction, and the story’s supreme ability to describe, illuminate and make real.”

The New York Times($30) – Give the gift of unlimited behind-the-paywall access and smartphone and/or tablet apps!

The Virginia Quarterly Review ($32/year) – Founded in 1925, the VQR continus raking in awards while aspiring to “its purpose of becoming a national publication of popularity and prestige, of independence and integrity.”

ADBUSTERS ($38) – “Our mission: diffuse the fog of mental pollution and change the way information flows. Through philosophical thrusts and tactical briefings, we hope Adbusters gives you an epiphany and is the start of your permanent occupation.”

The classics for lovers of longform – The New Yorker and Harper’s. Less so these days, but still – Esquire. Other magazines who regularly run quality longform include Mother Jones, WIRED, Rolling Stone, The Atlantic and Vanity Fair.

In general, you can access crazy amounts of kickass magazines on Buy Olympia Dot Com.

If you missed today’s very special episode of Things I Read That I Love, check it out.

Join A+
Related:hanukkahholiday gift guideThings I Read That I Love