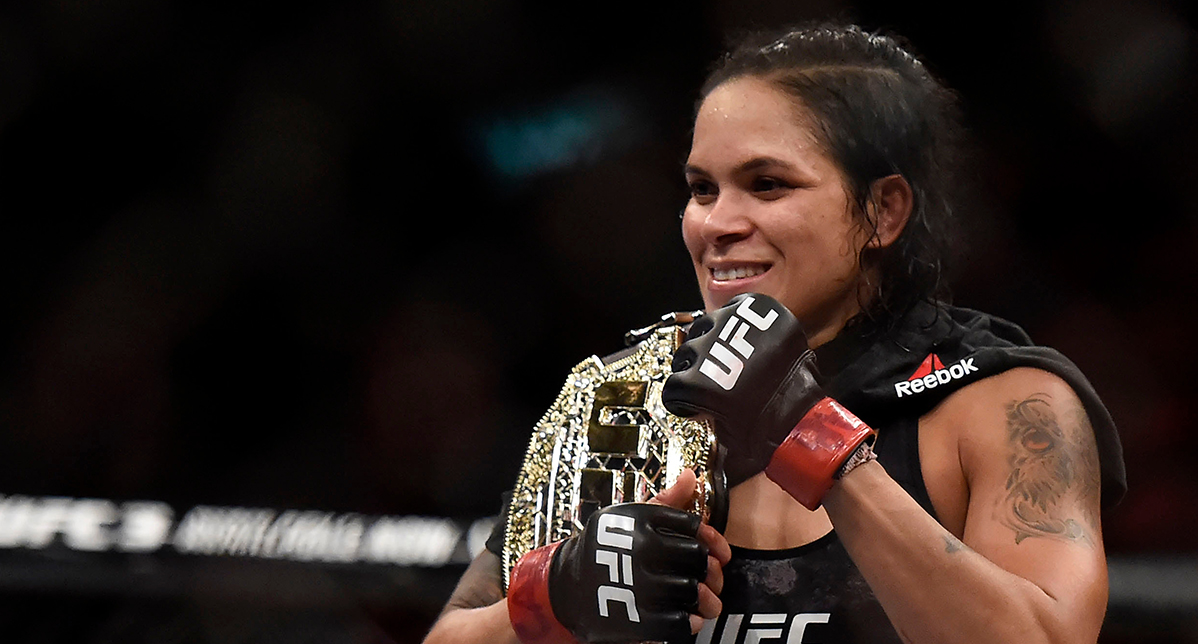 The first “superfight” for women’s mixed martial arts is scheduled for the end of the year, heralding an explosive evening of sweat, blood, and tears — in Las Vegas, baby!

In the middle of it all, standing in the spotlight of one of the world’s fastest-growing sports, will be the UFC’s first openly gay champion, bantamweight Amanda “The Lioness” Nunes. She will take on one of MMA’s toughest fighters in featherweight champion Cris “Cyborg” Justino on Dec. 29. The fight is the card’s main event.

Nunes, 30, won the UFC’s bantamweight title in 2016 when she took it from Miesha Tate. She defended her belt from Ronda Rousey last January in a highly touted (and viewed) match. Not only was it an impressive defense of her belt, but when the fight was over, Nunes ran over to her partner, Nina Ansaroff, and kissed her. Gay women kissing. On pay-per-view. On the UFC. For a sport that has suffered very publicly from homophobic and transphobic remarks, having an out champion in Nunes takes on extra weight.

Her partner is also a UFC fighter, and the couple has remarked that they’ve each found the best training partner they could ask for. On Aug. 18, the couple announced their decision to be training partners for life with their engagement.

As a fighter, Nunes looks like she can’t be stopped. She’s on a tear through the bantamweight division, whooping up on the likes of Tate, Rousey, Raquel Pennington (another openly gay fighter!), and Valentina Shevchenko. She has 16 wins and four losses, and for many fans, she’s got the best odds of beating Justino, who has dominated in her weight class with a 20-1 record. Justino, 33, is a former Strikeforce and Invicta FC champion, and has some of the heaviest hands in MMA.

It’s a good match, as both women are tough strikers who can’t seem to find enough opponents to chew through. It’s also an important match in the UFC, which usually saves some of its biggest and best fights cards for New Year’s weekend. 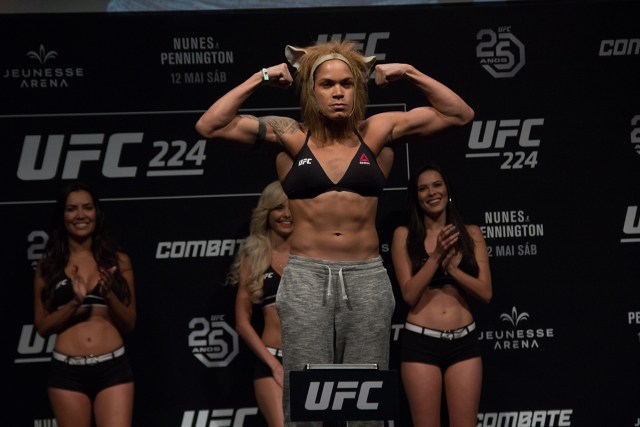 Amanda Nunes weighs in before her fight while wearing her lion mask on her head. Shutterstock.

Women weren’t taken seriously when the UFC first started allowing their fights, not until Ronda Rousey showed up. She started mopping up opponents almost immediately in vicious style — if you want to get attention, breaking arms sure is a way — and became a sensation. She held her undefeated reign for almost three years until Holly Holm took it from her with a devastating head kick in 2015.

Since then, the bantamweight belt has shuffled around until landing with Nunes, who has held it for two years. In the UFC, bantamweight means 135 pounds. Justino, Nunes’ opponent, fights at the featherweight level, meaning 145 pounds. Nunes will come up to Justino’s division for the fight. Both women are from Brazil, but Nunes trains and fights out of the United States.

If she wins, Nunes would be the first woman in the UFC to hold two champion belts in different weight classes, and would be only the third fighter of any gender to hold two such championships simultaneously.

The UFC still doesn’t have an openly gay male athlete; Liz Carmouche, now in the flyweight division, was the sport’s first out athlete, competing against Rousey in 2013. Having out athletes such as Nunes exist as they are is a boon to younger LGBTQ athletes; a recent study from the Human Rights Campaign found that 84 percent of Americans have witnessed or experienced anti-LGBTQ attitudes from teammates, coaches, and officials.

UFC 232 takes place Dec. 29 in Las Vegas. It will likely be available on a pay-per-view basis.