I cannot imagine high school locker rooms are really comfortable for anyone. Thinking back to the many hours I spent in my own high school’s locker room, I’m flooded with memories of the awful smell, the body insecurity that came along with being surrounded by the school’s most athletic girls, the constant yelling of inside jokes.

I also remember in great detail the chipped, blue-grey paint color of the concrete floor, because I was looking at it pretty much the entire time I was in there.

Growing up queer in a small town, I came out only to my closest friends. However, in true small town fashion, more and more people seemed to know this very intimate detail of my life every day – whether I wanted them to or not. Although I never had a big coming out moment, by the end of my senior year, the majority of students at my school – particularly those I played a sport with – knew I was queer.

I loved my time competing athletically – it offered me valuable lessons about working with others and pushing myself. But the more people knew I was queer, the more hyperaware I became of the homophobia that permeated every aspect of my athletic career.

I had coaches who referred to one fully out teammate as “one of those.” I overheard countless conversations between people about another teammate of ours who they suspected of staring at them while they were changing. I quickly learned that being queer on a high school team didn’t automatically give you a family like all sports movies would have you believe. So when it came time to change for practices or games, I had a few rules for myself:

Keep your head down —If your head is down, you cannot be accused of having wandering eyes. The quickest glance at someone could be completely misconstrued.

Keep your eyes on the floor when someone is speaking to you — If for some reason you have to look up to speak to someone, never look at them straight on. For reasoning on this refer back to number two.

Face the wall when you change — If you make it as clear as possible you do not want to see anyone naked, you cannot get accused of wanting to see someone naked. Changing in the bathroom stall is also an option.

Be the first one out — If you leave as everyone is still changing and talking, it shows you really do not care! At all!

I laughed writing these rules out as an adult; then I read them again with the fear I felt at 17, the very real fear of losing the love and support of friends and teammates and coaches when I had already almost lost my family by being outed – and they don’t seem so silly. 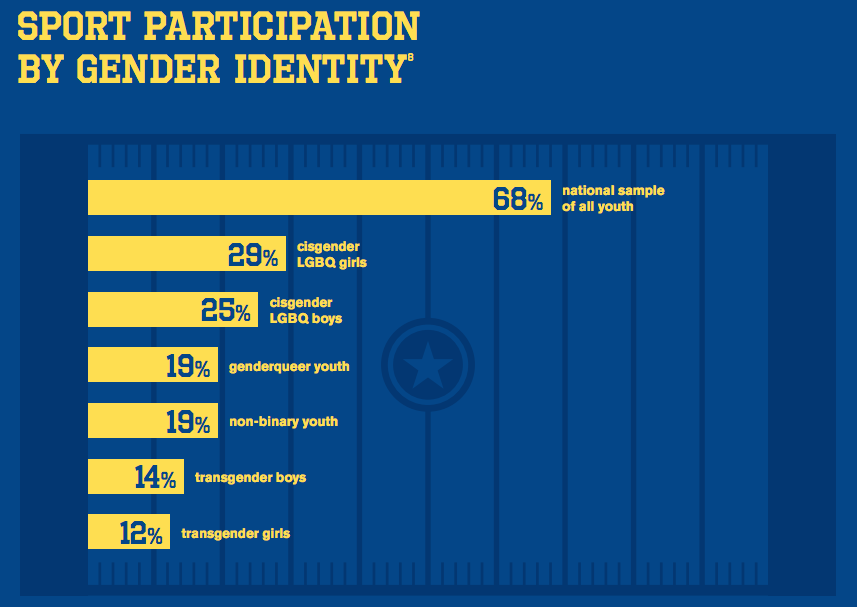 According to a recent study for the Human Rights Campaign (HRC) about LGBTQ youth in sports, 84 percent of Americans surveyed have witnessed or experienced anti-LGBTQ attitudes in sports, whether it be from teammates, coaches or officials. “Despite the growing visibility of LGBTQ athletes, coaches and officials, and the incremental gains in professional and collegiate sports, youth sports” are where those homophobic and transphobic attitudes are most prevalent.

In 33 states, there are still anti-LGBTQ sport participation policies in place. HRC estimates only 20% of LGBTQ youth participate in sports in those states. For transgender students in these states, participation statistics are even lower: 14 percent for transgender boys and 12 percent for transgender girls. With stories like Terry Miller and Andraya Yearwood‘s – two trans teens who recently won first and second place in Connecticut’s high school track championships, and faced national transphobic backlash – it’s not hard to see why.

The study also found four out of five LGBQ youth are not open about their sexuality to their coaches, the very people appointed to lead, guide and support them. Considering some of the most respected, high profile collegiate coaches have been exposed in the past couple of years for telling their players to not be publicly open about their sexuality, I’m not surprised. If Brittney Griner could bring a national championship title back to Baylor University, but still effectively be closeted by Kim Mulkey and the university’s student policy for four years, a high school student can hardly be expected to believe their coming out to a coach would end any better. 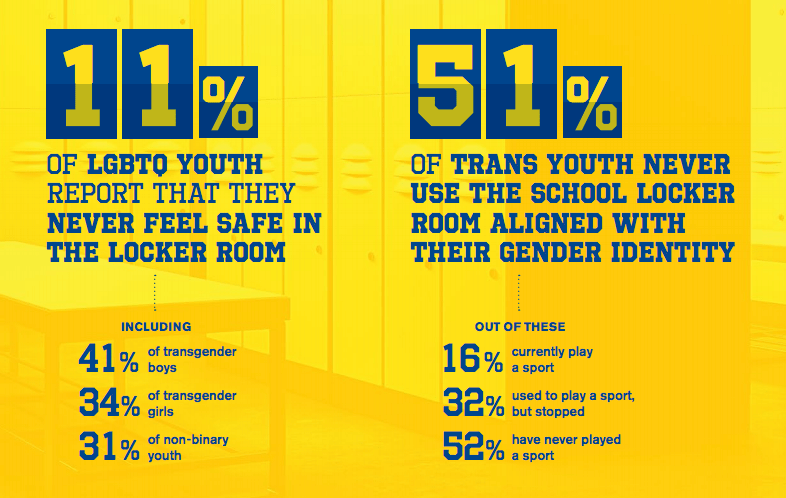 Do not get me wrong: I’ve seen the experience of being a queer student athlete improve. Each time I return to my hometown, I hear about more and more students who actively participate in sports while being out and living their truth, regardless of any negative reactions they might receive. I hope the trend continues, but I also refuse to accept the excruciatingly gradual improvements as good enough.

So what can we do?

We can check our own inclusivity practices. In their report, the HRC includes a cute acrostic on how to “Be a CHAMPION for LBGTQ Inclusion.” They encourage you to create safe spaces, hold people accountable, arm yourself with information, model inclusive behaviors, promote respect, implement inclusion policies, organize inclusion trainings and never assume someone’s orientation or identity.

We can support others already doing the good work. The Athlete Ally is an educational advocacy group that has worked closely with the NCAA to develop LGBTQ inclusion policies. They maintain the Athletic Equality Index, a look at the state of LGBTQ inclusion policies and practices in the NCAA’s Power Five conferences, and they use the Ambassador Program to give a platform to LGBTQ voices in order to advance the community’s rights within all levels of the athletic sphere. 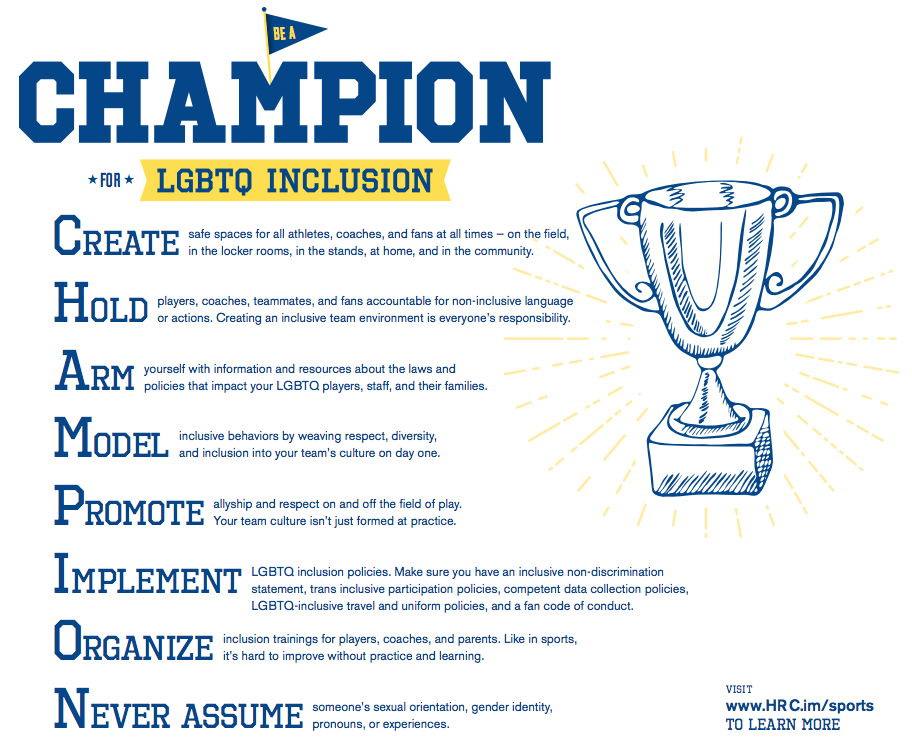 We can get active in our own communities. Growing up is hard enough, to ask kids to fight for their right to be open on top of that is cruel. If I had seen or heard one person in my high school be educated about or interested in advocating for LGBTQ athletes, I imagine my experience would have been vastly different. Go to coaches or administrators from your alma mater and show them the results of the HRC study. Point them in the direction of local inclusivity training. Offer to start a mentorship program. Make your voice heard so that the kids on the court, field or track know their voices matter.

To young queer athletes, the locker room is the biggest closet they often cannot step out of without fear of retaliation from all angles. Participating in sports is supposed to teach young people about teamwork and putting individual differences aside for the betterment of the whole. Until queer and trans athletes do not feel the need to regulate their behavior for the appeasement of their cis, straight counterparts, these ideals cannot be met. It is time to look up, speak out and stay until we’re heard.

Hope is currently a journalism major with a double minor in electronic media and communications and women’s and gender studies at Texas Tech University. She has previously held an internship with Ms. Magazine and enjoys writing about reproductive rights and queer issues, especially as they pertain to the South. You can find her on Twitter, Instagram or her blog.

Hope has written 1 article for us.