Previously on Legends of Tomorrow, Astra released a bunch of evil souls from hell and created what the Legends are calling Encores aka bad guys back for their second act, Nora was off playing fairy godmother, the timeline swapped Zari out for her brother but then the present-day social media mogul version of her was swooped onto the Waverider.

We open this week in Iron Heights, 2004, where a man named Freddy Meyers is strapped to the electric chair. I love this because it’s so on the nose, an homage to Freddy Krueger and Mike Myers; there’s no subtlety, because why start now? It delights me to no end, and this scene is deliciously campy and it’s clear we’re in for a classic 80s slasher romp.

When asked if he has any last words, Freddy Meyers makes eye contact with the distraught woman on the other side of the glass and says, “I love my mother,” before he’s fried to death.

Then we cut to a Coroner who is jamming out to Heaven is a Place on Earth. A body bag ruffles, the transport van crashes. The Coroner finds himself faced with an empty body bag…AND HIS DEATH.

Some delicious 80s synth takes us to the new badass opening credits and I am struck for the millionth time with how much I love this silly show.

Back to present day, on the Waverider, Constantine is lurking around the ship, obviously up to no good, when Sara busts him. 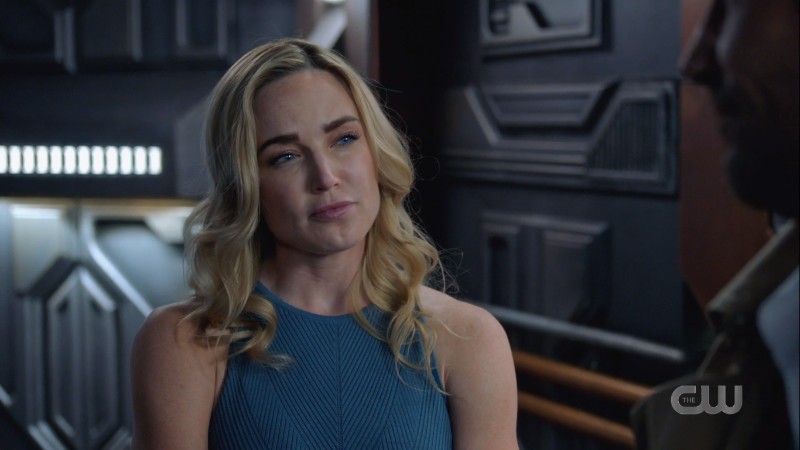 The jump-scare chords that happened when she appeared made me fully cackle.

He explains that he’s trying to go off on a side mission but didn’t want a big fuss over it. He’s a lone wolf. With a stray Gary. So they slink off into the night with a wary warning from their captain and a near-miss of a musical number from Ray.

But Ray doesn’t have time for a big group sing, because in a flash of blue light, his girlfriend’s back. 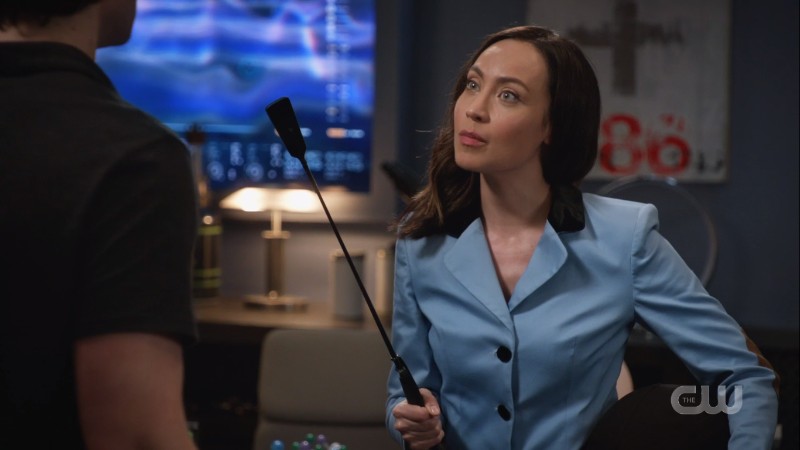 I also have a few wishes that would involve Nora in this outfit.

Nora starts ranting about how she’s supposed to be helping people but all these kids want are ponies. She’s feeling pretty down about it so Ray starts to try to set the mood but by the time he dims the lights, Nora is sound asleep.

Elsewhere on the ship, Nate is trying to get Zari to remember being on the timeship, to no avail. Behrad wants to wipe her memory, but Nate still has hope; they have to go on their mission though, so they lock Zari in a room, despite her protesting. 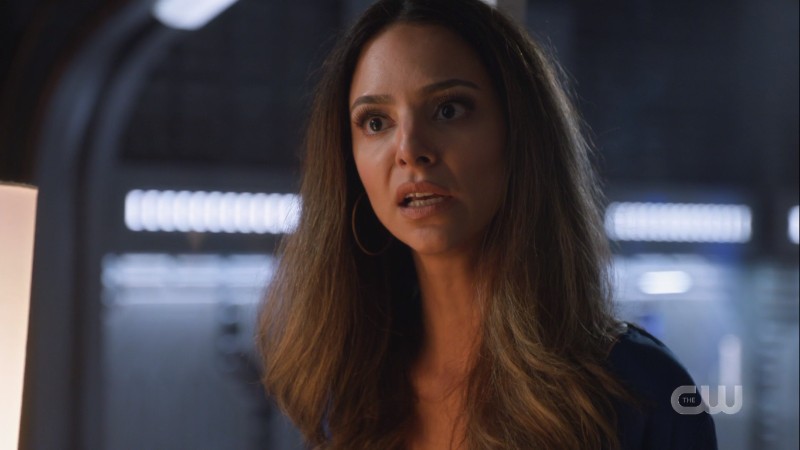 A tiger in a cage can never see the sun, THIS DIVA NEEDS HER STAGE!

Once (most of) the team is gathered, Gideon tells them that the newest Encore is Freddy Meyers and the year is 2004. Sara is not thrilled about going back to the early aughts, but Ava is PUMPED. A true crime junky with her own podcast to boot, she knows almost as much about Freddy and the prom murders as Gideon does. 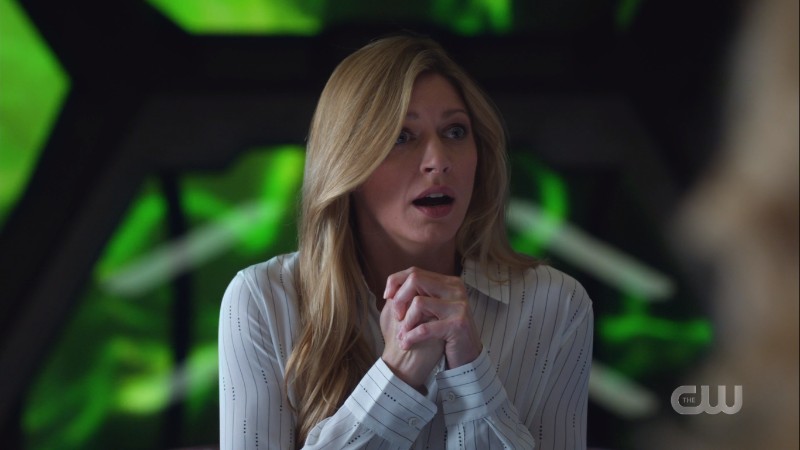 Ava’s knowledge of who the Final Girl is, plus the promise of a Class of ’89 reunion happening gives them a place to start, so off they trot to Central City, 2004.

Sara and Ava strut into the school, Ava in a blazer and geeking out, Sara amused at her amusement.

And what’s funny is, as they walked in, I was trying to do the math of who among them would have been in high school in Central City in 2004. Turns out, the answer is Mick Rory. See, he had missed the team meeting otherwise he would have told them all about the “loser” Freddy Meyers. He runs into someone from high school named Ali, but he pretends he’s not Mick and skulks away as Sara revels in someone being punished for not attending her team meetings.

Sara and Ava go to the check-in desk and find Tiffany. Ava stutters and stammers like she’s meeting a celebrity and Sara is trying to keep her captain hat on but is just so amused by her. 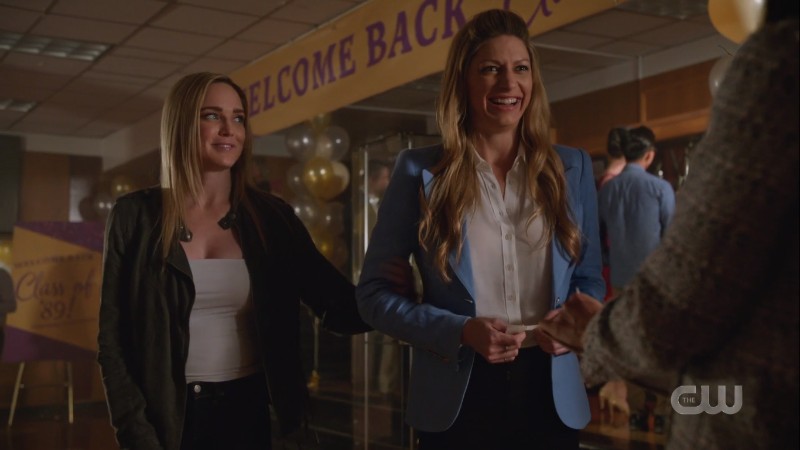 Ironically, Ava is what I looked like the one time I met Jes, and Sara is what my friends looked like watching me meet her.

Sara eventually saves Ava from herself and gives their names as Lisa and Kelly, which may have been just the first names Sara thought of, but I like to think were also a Saved by the Bell reference. They make a comment about the weirdness of time and Sara drags her starstruck girlfriend away.

Nate and Ray are outside scoping the perimeter and they find a dead cop and know they’re too late; the killer is here. Inside, Sara and Ava are watching a memorial unveiling, nervous about what’s about to happen. 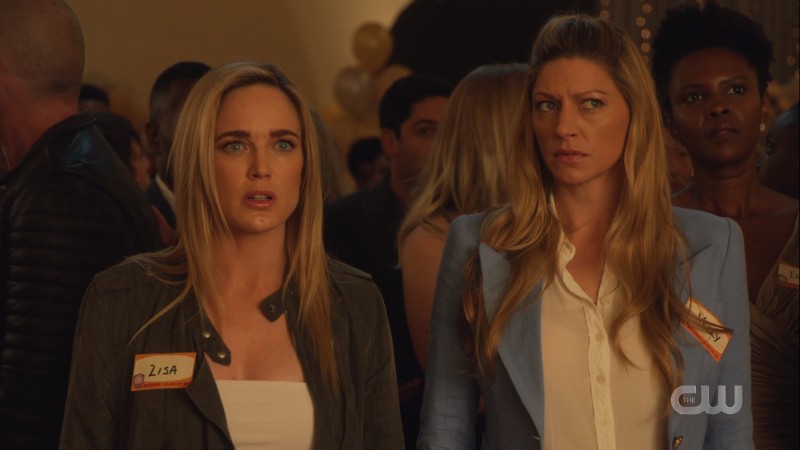 I love how Ava dressed up and Sara was like, “What? It’s not a tank top.” Which is absolutely how they both would have dressed for a high school dance.

But when Tiffany is called and doesn’t show up, the man does the unveiling himself, revealing instead Tiffany’s dead body. Also this was kind of glossed over but she was stabbed with the trophy that earlier Ava said was what she used to survive the first attacks 15 years ago. Total bummer.

And bad turns to worse when it’s revealed that this killer isn’t just armed with a penchant for stabbing, but also a touch of telekinesis.

Cut to 2020, in Northumberland, which is apparently not a word Miley Cyrus made up. Constantine and Gary go into an old house that Constantine reveals is a place he lived for a while at some point. He makes a big dramatic stink about how it’s been abandoned for years, but when he opens the doors, there are pizza boxes everywhere and a sleeping bro on the stairs. He grumbles aloud and turns to see himself walking out of the room with two humans, seemingly of two different genders, in tow who look rather… satisfied. Constantine calls the mirror image “Charlie” and sure enough our girl drops the shift and reveals that perfect face we know and love. 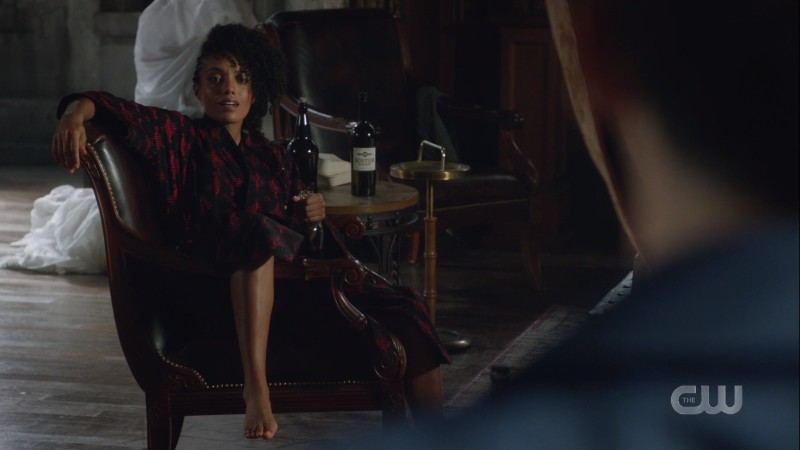 I cannot wait for Charlie to interact with Zari 2.0.

And so, just like that, on top of being inherently gender-fluid by the nature of her powers, she’s officially, canonically queer. Bringing the total of regular/recurring canon queer characters to a whopping five.

Back in 2004, realizing they’re trapped in the school telekinetically, Ava starts to psychoanalyze this development, saying it’s probably connected to the same feeling of powerlessness that started this killing spree in the first place. Realizing the danger, Mick says that they have to save Ali… er, the Class of ’89.

Left with little other choice, Sara decides to let Ray do what he always wants to do, and redeem the bad guy. So she sends the boys back to 1989 to stop Freddy from becoming a serial killer.

When they get to 1989, the first thing they see is Freddy being bullied. But then they see popular Tiffany ask him to the prom, and they sense a prank on the horizon. Sweet baby Freddy doesn’t though, and runs away from the creepy strange adults trying to tell him about his life so he can go get ready for prom.

In 2004, Ava is recording snippets for her podcast while they try to find the prom night slasher. 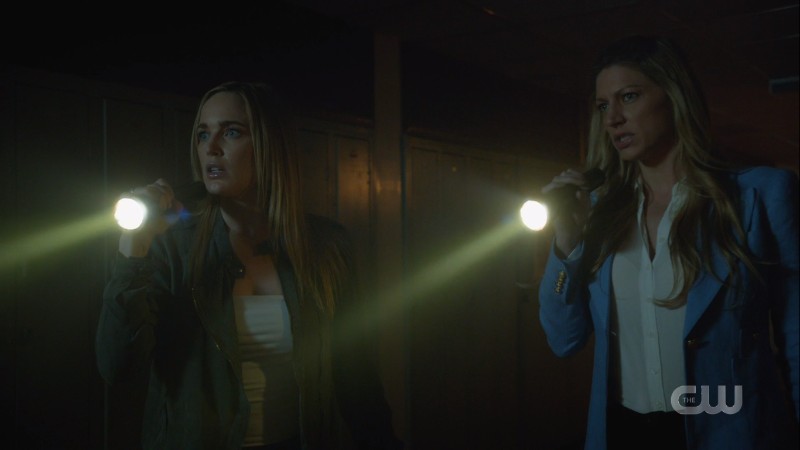 This looks like the cover of a Nancy Drew novel and I am here. for. it.

Instead they find a straggler who wandered out of the safety of the gym, and before the girls can get her back inside, the slasher appears, shoves her in a lockers using magic, and crushes her to death. Ava and Sara are realizing that this season isn’t messing around with its casualties and they’re going to have to up their game if they’re going to be any match for the Encores. 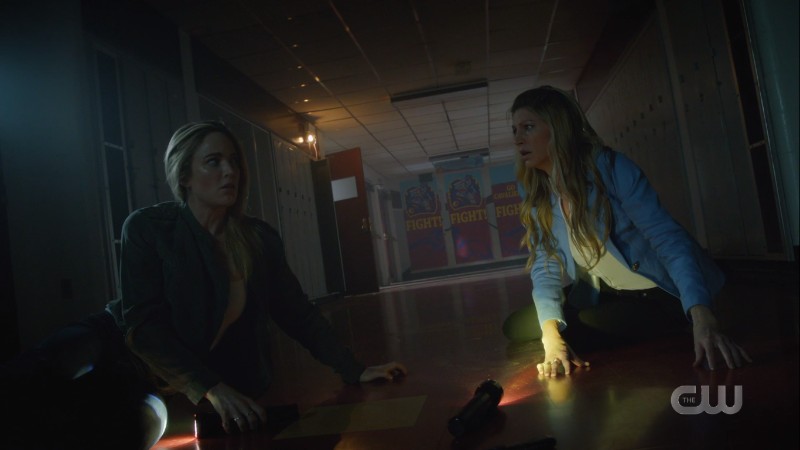 On the Waverider, Nora is getting itchy because teens on prom night are all a-wishing and a-hoping, but ultimately it ends up being Freddy who needs Nora the most. While Nora is explaining the whole wish situation to Freddy, and really hoping he won’t hope for the Class of ’89 to be stuck in a musical number where they are forced to express their feelings and dance until they burst into flames, Freddy’s mom interrupts and is a little horrified to learn her baby boy is going to prom. She looks itchy like some kind of Margaret White, worried her son is going to grow up and leave her. Reader, it was at this point I thought the twist of this episode was going to be that it wasn’t the bullies at school that drove Freddy to snap into a murderous rage, but his mother, and that the boys were going at it from the wrong angle. And reader, I was wrong.

Anyway, Nora is pleasantly surprised when instead of a teen massacre, Freddy just wishes for a really nice suit to replace the ill-fitting one he originally planned. And then, of course, he asks for his ride to the prom to be a pony. 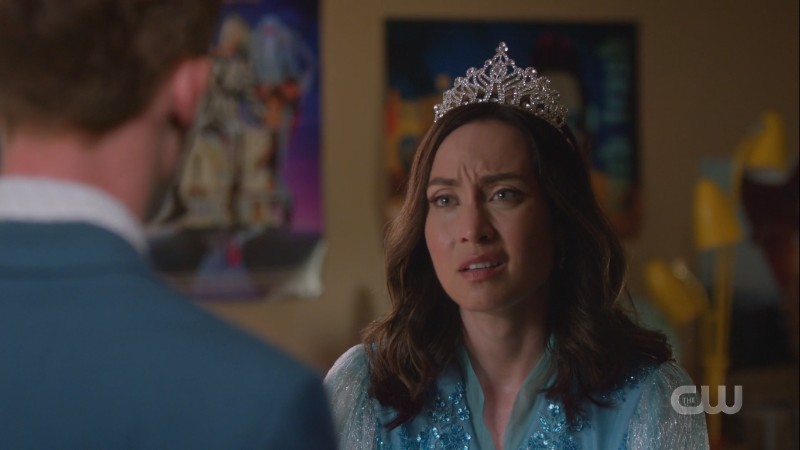 Nora in this outfit will never cease to be hilarious.

Though it seems that she ended up talking him down, because when Freddy does finally get to the prom in his dapper new suit, he’s in a limo. He’s happy as can be as he gives Tiffany her corsage and they head in together, and Nora smiles proudly as she follows them inside with Ray on her arm (and Nate on his.)