Back on the Waverider, Zari is trying to break out of the room when Behrad comes in. Zari finally notices the air totem on his wrist and they start to fight.

Zari accuses Behrad of being the do-no-wrong favorite child, Behrad accuses her of being vapid. This insult cuts deep. She looks genuinely hurt and her overconfident facade flickers like a hologram for just a minute as she says, “I’m not a void. I’m a business.”

And this is when I want to point out that at no point has Zari 2.0 acted dumb. She’s never pretended not to understand something or said anything stupid. She is feigning shallowness; she’s making it seem like all she cares about is her social media following. From the second she told her assistant to add a clip to the end of a compilation, it was clear she was strategic. From the second she knew something was up with Nate, it was clear she was clever. So for Behrad to write her off as vapid just because he doesn’t fully understand her passion? It hurt. It made it clear that her brother didn’t really know her at all. And also? What made me extra sad? “I’m a business.” She has no self-identity, she doesn’t know who she is beyond who the public expects her to be, because it’s all she’s known. And it must be exhausting. 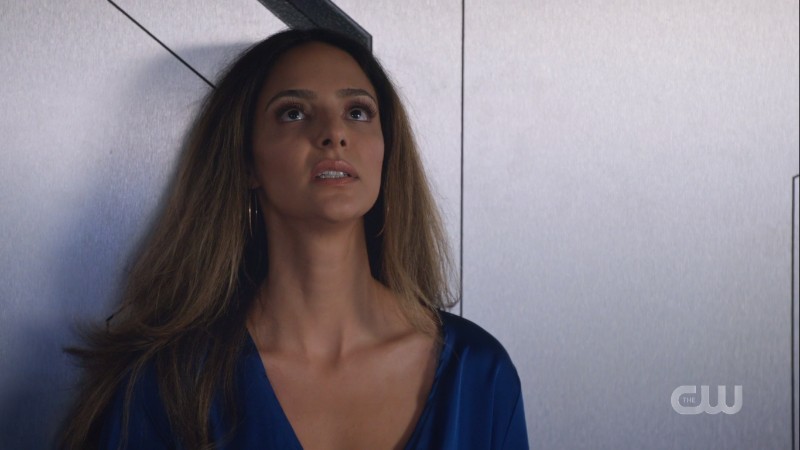 “She’s so lucky, she’s a star, but she cry, cry, cries in her only heart, thinking: If there’s nothing missing in my life, then why do these tears come at night?”

Zipping out to 2004, Ali tries to sneak out of the gym, but Mick stops her. He admits he really is the Mick Rory she remembers, and agrees to sneak out with her. Mick, more awkward than he usually is when asking questions, tries to ask Ali if she’s single. Influenced by the band of queers around him at all times, he even asks her if she has a girlfriend, just in case. She assures him that she’s single and is about to ask what he thinks would have happened to them if prom had gone differently… but then she’s stabbed to death.

At 1989 prom, there’s a slow dance, and at first it looks like the bullies are going to dump a very conspicuous net full of trash that the decoration committee just allowed to be the centerpiece of this dance on Freddy’s head, but Tiffany is enjoying her time with Freddy and his newfound confidence and scoots him away from it.

Nora is all happy for a minute but then the bullies take matters into their own hands and take the more direct route of pushing him down and throwing his drink at him. Tiffany tries to explain that it WAS a prank but she likes him now that he took down his metaphorical ponytail, but he’s too upset to hear it.

Nora decides then and there what most of us who attended always knew: high school sucks. 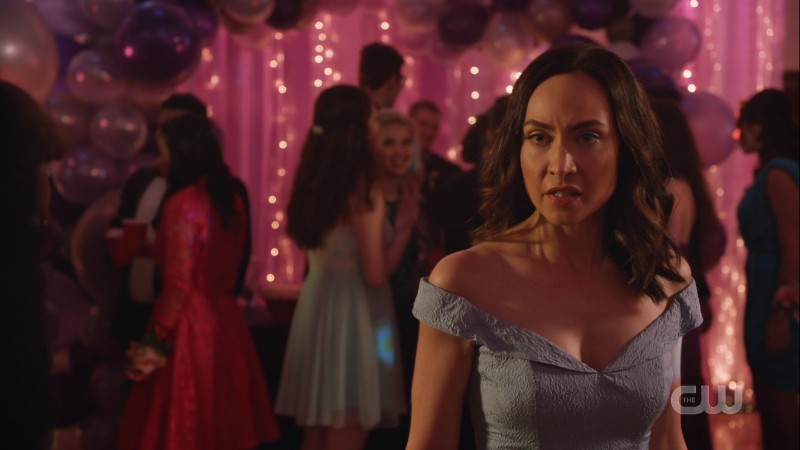 At my senior prom one of the popular girls saw me in the bathroom, did a double take, and said, “Oh wow I didn’t recognize you. You look…pretty with utter disbelief in her voice. So. Yeah. High school sucks.

Outside, Mick storms down the hallway past Ava and Sara, furious that his high school sweetheart was just murdered in front of him, Sara tries to calm him down; maybe they can still save Ali.

Nora catches up to Freddy and talks to him as someone who has given into that anger, that darkness before. She tells him that there’s so much more. And normally I would summarize her advice to him, but the actual words she said were so powerful, I want to share them verbatim:

“Being yourself, that is a magic stronger than any wish. Being truly okay with myself, scars and all, is how the right people truly found me.”

And it’s so true. It was the same way for me. The older I get and the more I get to know myself, the more the people I draw close to me fit into my life. It took growing up, coming out, facing my demons head-on, and admitting that I still don’t have it all figured out, but finally, finally, the right people truly found me.

So Freddy uses his last wish; he just wants to dance. So Nora DJs and gives him back-up dancers and sparkles and he has the time of his life. 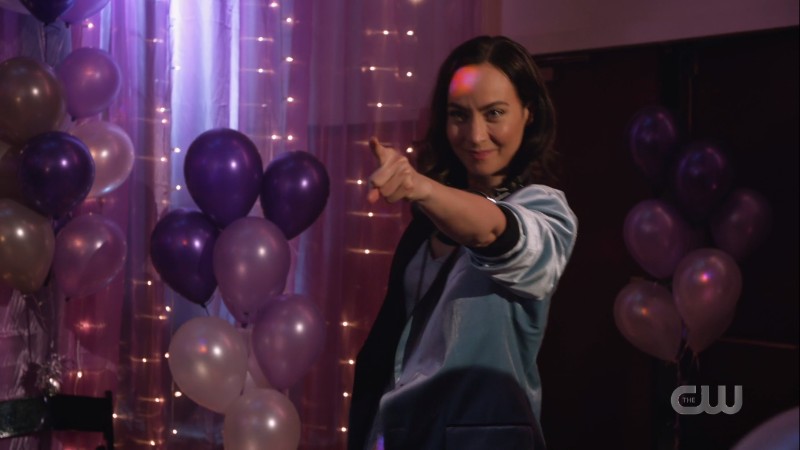 His peers love his new energy and Tiffany is so happy this night wasn’t ruined by her idiot guy friends.

Up on the Waverider, Zari, still desperate for the internet, tries the computer in the room she’s locked in. As she puts her hands on the keys, a memory hits her. 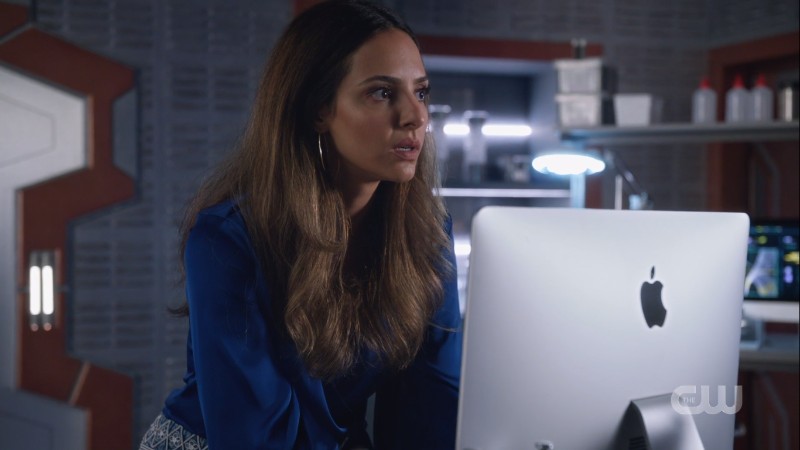 Zari uses her uncovered memories to hack her way out of the room, surprising even Gideon.

At the prom, Freddy thanks Nora and tells her that her job is really cool and that he’s going to be okay, she should go help other kids now, and releases her from her duties as his fairy godmother.

After storming out of the Waverider, Zari unwittingly finds herself in 1989, and climbs into Freddy’s limo. A bunch of teens pile in, but before she can figure out what’s going on, we see the killer’s mask come into frame. And it’s not Freddy. 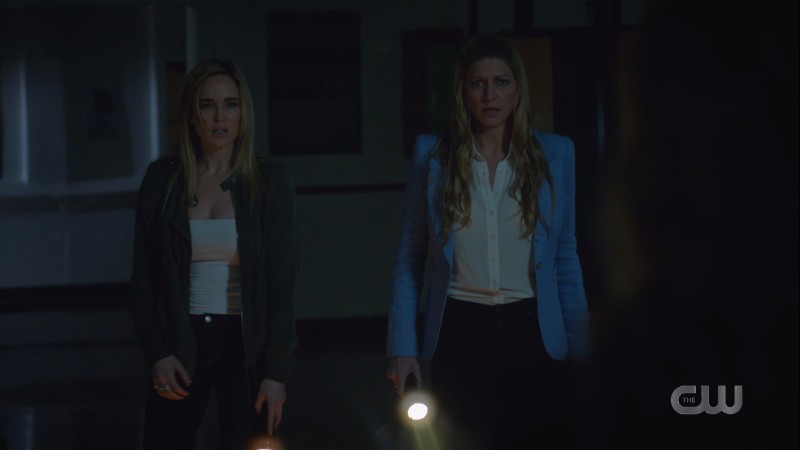 “No gays will be buried on our watch!”

In the heat of the fire, the killer’s mask melts off and reveals that the killer has been Freddy’s mother all along. (Also her name is Kathy which I guess maybe is just a name but the first thing I thought of was horror queen Kathy Bates.)

Ava tries to talk to Freddy’s mom, probably partially for her podcast, but also to distract her while Sara creeps around to grab an axe. They flank her and start to fight and Sara knows this is a bi moment fo her girlfriend so she lets her say it: “We’re final girls!” 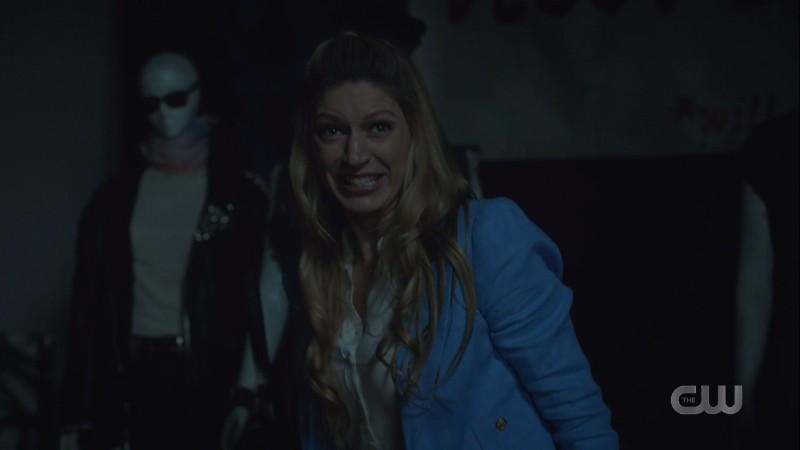 Ava being let loose from the Time Bureau has been a non-stop gift.

And so two fights ensue against Kathy Meyers, one in 2004, one in 1989. Just as Freddy realizes it’s his mother behind the mask, Kathy uses her newfound powers to hold Avalance in place. Things are looking bleak.

But then Freddy talks to his mom; he’s too sure of himself now, he knows he can make friends, stand on his own. He can be his own person, without her. He will not be punished for the sins of his mother.

And with that declaration, history is changed, and Sara and Ava watch their tormentor disappear before their eyes. 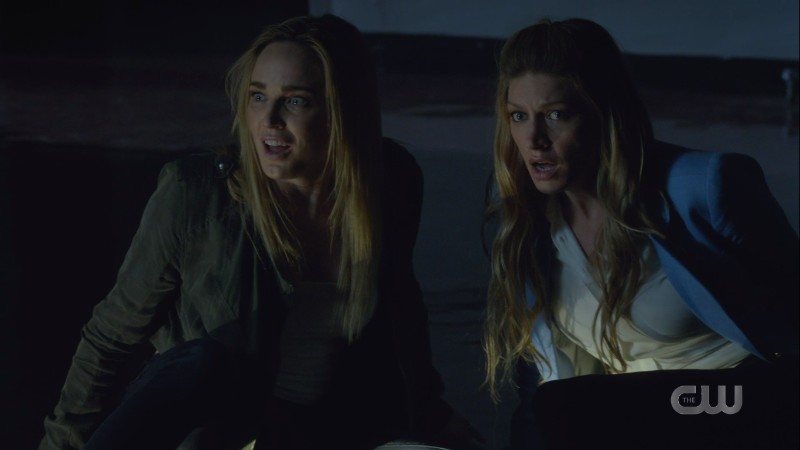 “Hey! We had a plan, and the plan worked! That never happens!”

As his mother is behind hauled away by the police, Freddy feels a little lost. What do you do when the walls around you are lifted? When that confinement was all you’ve ever known? And Nora says simply, “Survive.” She says that her life was also full of childhood trauma, but that doesn’t have to define her. And this doesn’t have to define Freddy. He gets to choose his own destiny. 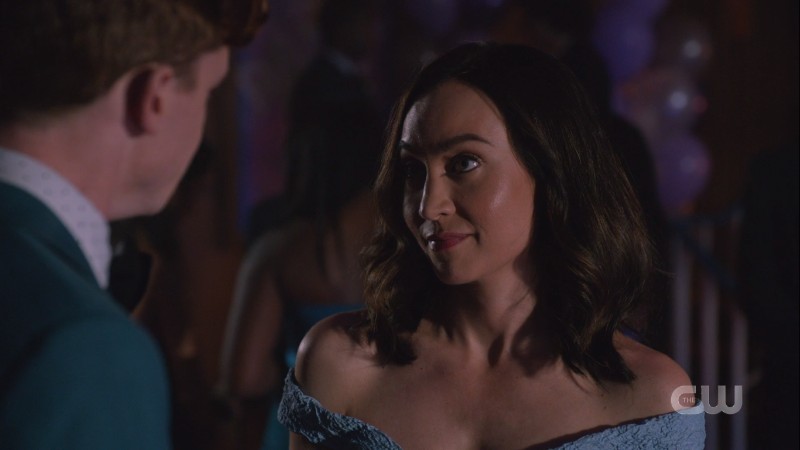 “If you were happy every day of your life, you wouldn’t be a human. You’d be a game show host.”

Nora assures him he’s going to be okay, and he hugs her. Suddenly her job doesn’t seem so bad after all.

In the med bay of the Waverider, Behrad checks on his sister. Zari, finally starting to understand why her brother has been lying about business school, decides she wants to stick around a little longer and figure out what this is all about. 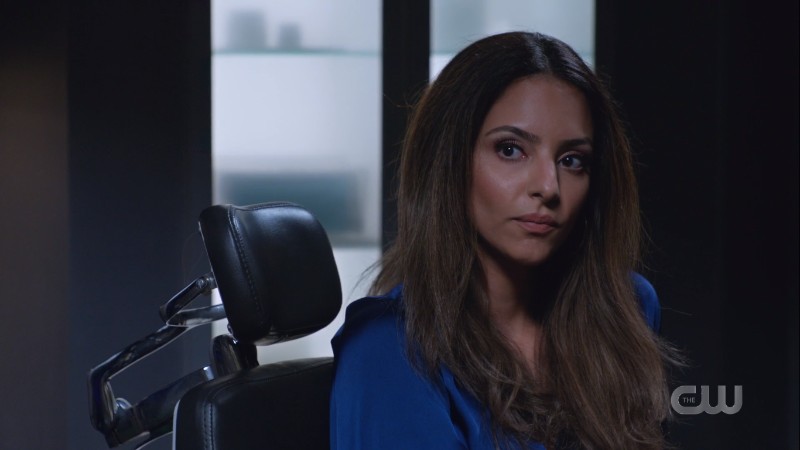 Zari should give her glam squad a raise.

Then everyone heads to 2004 and decides to just assimilate into the reunion. Mick, Ali, and the random locker lady are all alive. Freddy and Tiffany are dancing, all grown up and still together.

Sara and Ava dance, and Ava is just thrilled to have been the Final Girl of her dreams. Sara points out that technically they both survived, but Ava says Sara’s died enough times that she gets to take this crown. 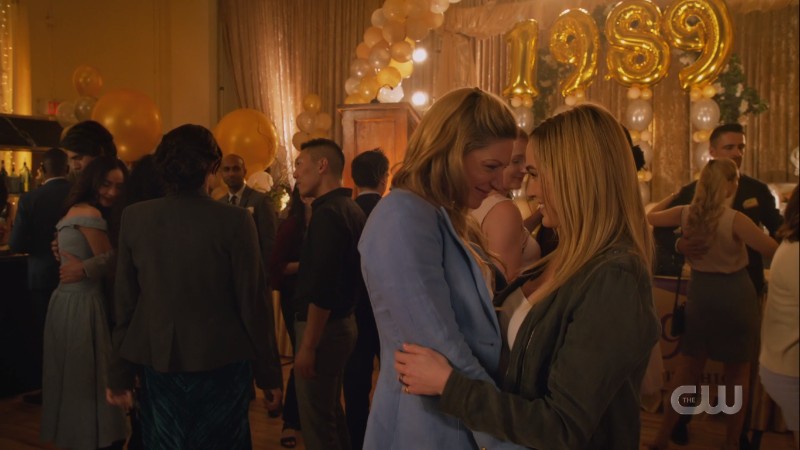 It’s very cute. Also Heaven is a Place on Earth is playing again, cementing it as the queer anthem we’ve known it is since San Junipero.

And then Behrad discovered a photo booth station at the prom, thus beginning a photo shoot montage, aka one of my favorite kinds of montages. Cute moments include the time bros doing their signature move, a big class photo, Sara giving Ava cheesy, real, unfabricated high school prom memories… 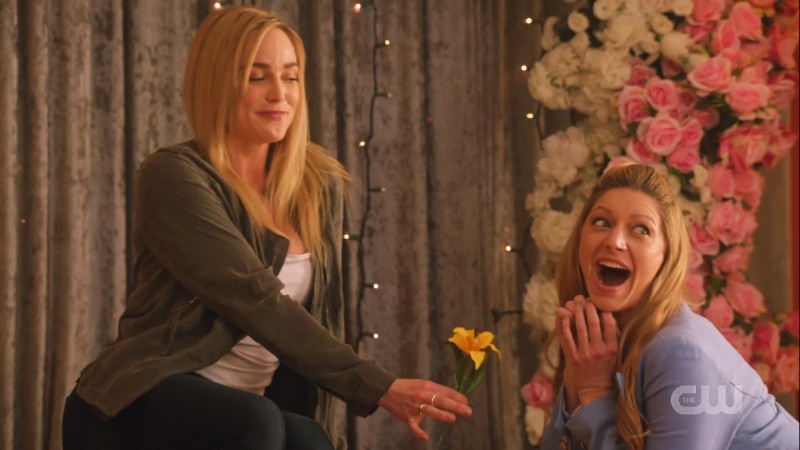 “As you wish, Buttercup.”

…and (most of) the Ladies of Tomorrow being adorable. 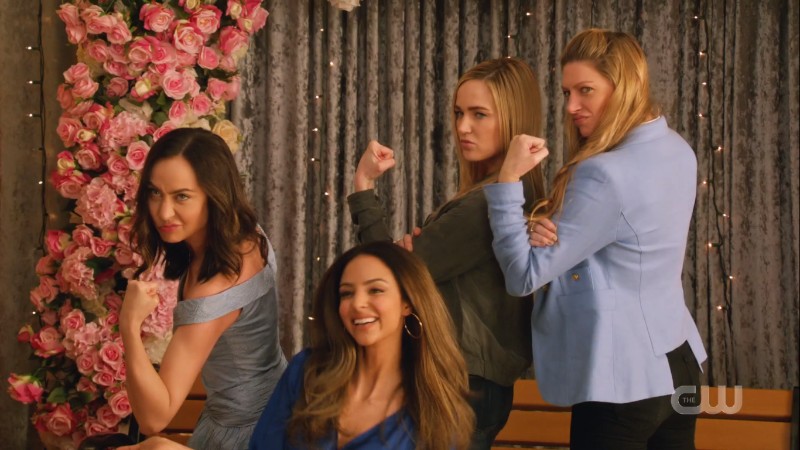 A brain, an athlete, a basket case, and a princess.

At one point, Sara realizes that once again Mick is missing from the big group hang, but he’s a little…busy with Ali in the hallway. It’s actually kind of sweet.

Then we cut back to 2020, where Constantine is sitting at a table with Charlie, drinking and considering his next move. He has an idea of what to try next re: stopping Astra, and it involves a witch he used to run with in a gang of youths called the Newcastle Crew. He gestures to a creepy-ass door and says the witch is in there. Also the witch is Astra’s mother, and she’s not too fond of Constantine.

Charlie all but tells him to suck it up and just do it. There are things in her past that she can’t fix, so he shouldn’t wait to fix his. 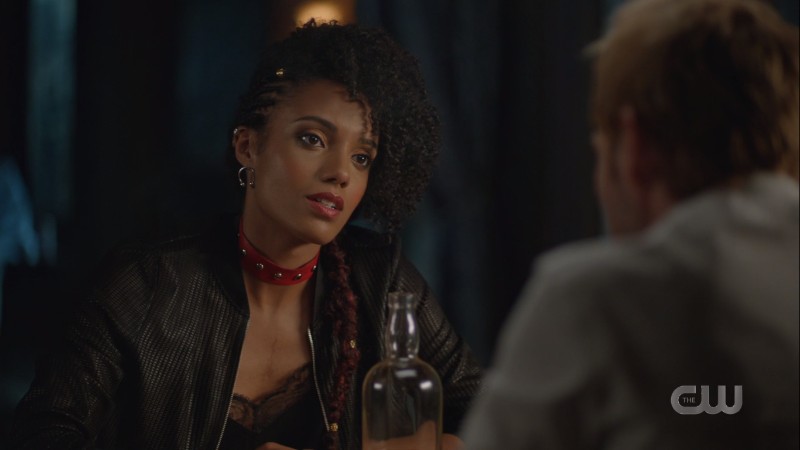 He uses some magic and channels Hecate and the doors open in a fiery blaze. Which I’m sure is fine and chill.

And that’s all til next week, when heads will roll! I’m not as well-versed in 80s horror as I’d like to be, so please please please tell me any lil hints and nods I missed!