The term “Lavender Menace” was first summoned by Betty Friedan, storied author of “The Feminine Mystique” and a National Organization for Women spokesperson who feared the encroachment of lesbian feminists into what was then a very white, very heterosexual and very (upper-to-) middle-class second wave feminist movement. Lesbians would ruin everything, she feared, with their radical agenda and reputation for misandry!

Lesbian writer and activist Rita Mae Brown (author of Rubyfruit Jungle) promptly resigned from her post in NOW, and began planning a “Lavender Menace Zap” for the 1970 Second Congress to Unite Women in New York. Brown and her local lesbian radical feminist consciousness-raising group prepared a ten-paragraph “Women-Identified Women” manifesto and also hand-dyed and screenprinted “Lavender Menace” t-shirts for everybody, which they cleverly layered to obscure before filing into the 300-strong auditorium where the Congress was set to begin. But just as the first speaker came to the mic, a lesbian feminist switched off the lights, pulled the plug on the mike, and ignited a series of “rebel yells.” The lesbians tore off their coats and sweaters, revealing the shirts benath, and when the lights came back on, they were standing proud, yelling things like “I’m tired of being in the closet because of the women’s movement!” and ‘Who wants to join us?” The Menaces passed out copies of “The Women-Identified Women” and stole a few minutes of stage time to address the exclusion of lesbians from the conference and the women’s movement. By the second day of the congress, lesbians were running workshops on homophobia. It was a major turning point for lesbian inclusion in mainstream feminism. 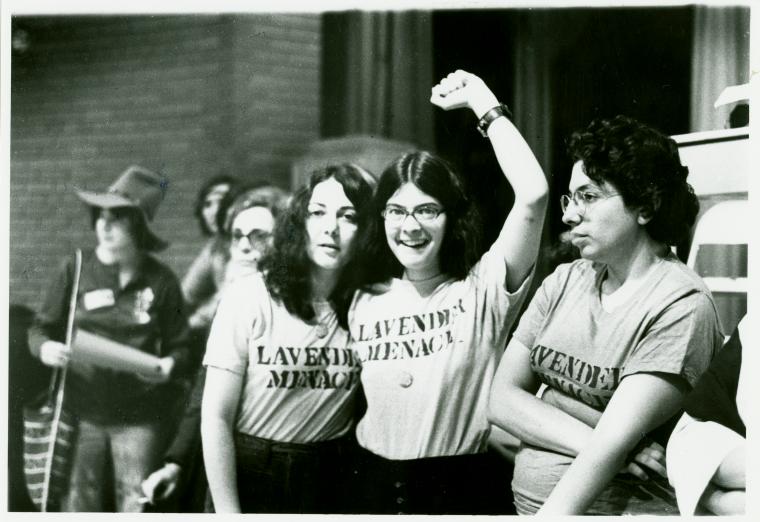 Three members of Lavender Menace at the Second Congress to Unite Women, New York, 1970 May (May 1970), photo by Diana Davies via NYPL

That zap was re-located to a different event and a different time with different participants for the 2017 LGBT history miniseries “When We Rise,” which inspired us to make Lavender Menace t-shirts for y’all. They were a HIT and we’ve blown through five printings of each cut, all proudly donned by lesbians, queers, bisexuals, pansexuals and otherwise-identified women and non-binary people who look good in purple. (Which is truly everybody.)

The spirit of our Lavender Menace shirt is the spirit of all of us here, who flaunt the heteronormative patriarchy and dare to be ourselves, even when it pisses everybody else off and even when it’s not politically convenient. 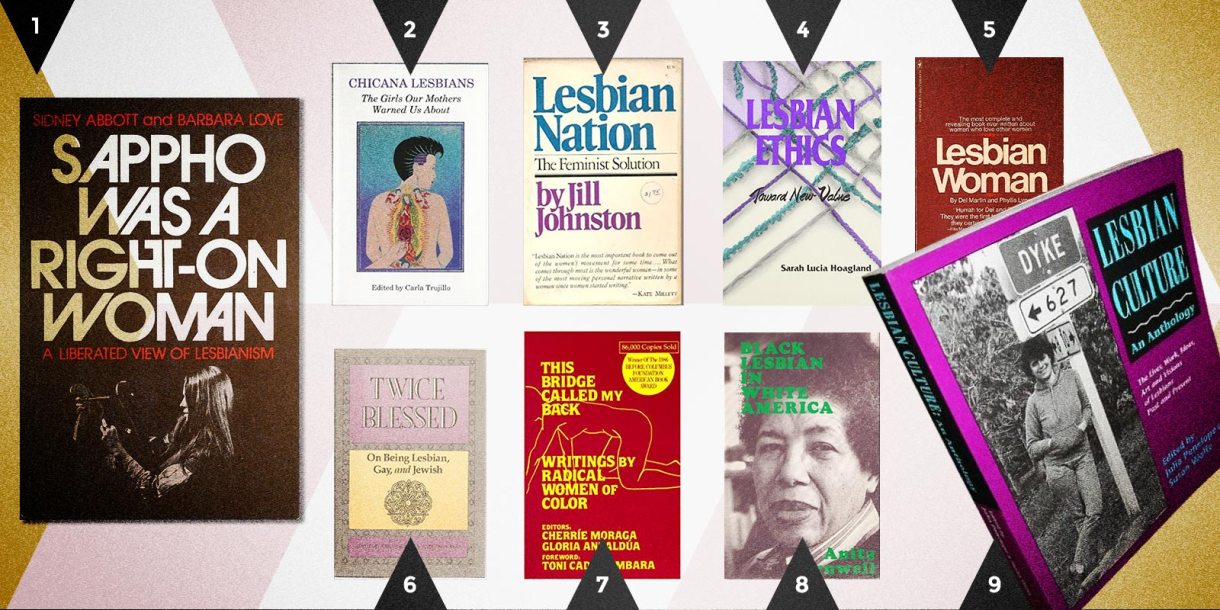 Sappho Was a Right-On Woman is considered the first nonfiction book about lesbianism from a “positive perspective.” This Bridge Called My Back is a landmark anthology of Chicana lesbian feminism, which came out of the 70s/80s Chicana feminism movement and aimed to create what Chicana lesbians Cherie Moraga and Gloria Anzaldúa called “theory in the flesh,” “one where the typical realities of our lives —our skin color, the land or concrete we grew up on, our sexual belongings—all fuse to create a political born out of necessity.”

These books are great gifts for people who can understand them in context.

Books That Look Back On Lesbian Feminism 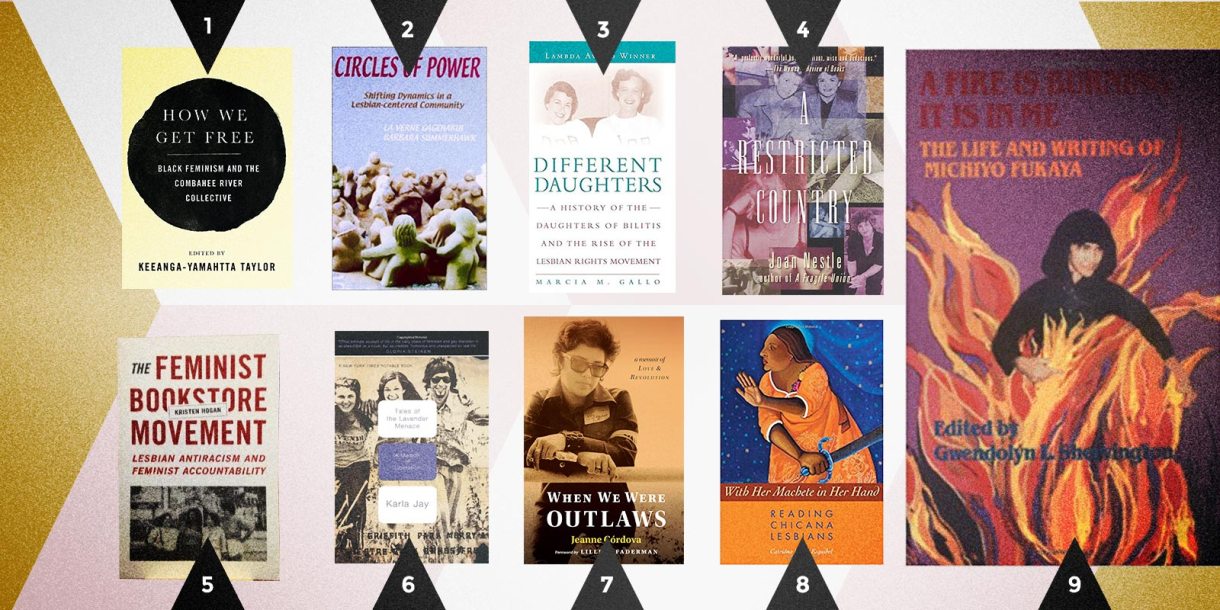 1. How We Get Free: Black Feminism and the Combahee River Collective, edited by Keenaga-Yamahtta Taylor ($13.23), 2. Circles of Power: Shifting Dynamics in a Lesbian-Centered Community, by Laverne Gagehabib & Barbara Summerhawk ($10.32), 3. Different Daughters: A History of the Daughters of Bilitis and the Rise of the Lesbian Rights Movement, by Marcia M. Gallo ($17), 4. A Restricted Country, by Joan Nestle ($19.95), 5. The Feminist Bookstore Movement: Lesbian Antiracism and Feminist Accountability, by Kristen Hogan ($20.50), 6. Tales of the Lavender Menace, by Karla Jay ($10.87), 7. When We Were Outlaws, by Jeanne Cordova ($10.63), 8. With Her Machete In Her Hand: Reading Chicana Lesbians, by Catriona Rueda Esquibel ($14.29), 9. A Fire Is Burning It Is in Me: The Life and Writings of Michiyo Fukaya, by Michiyo Fukaya and Gwendolyn L. Shervington ($9)

These books look back on the emerging lesbian rights movement, either through a historical/political lens or through memoir and personal experience.

Books That Look Ahead: Inclusive Lesbian and Queer Voices 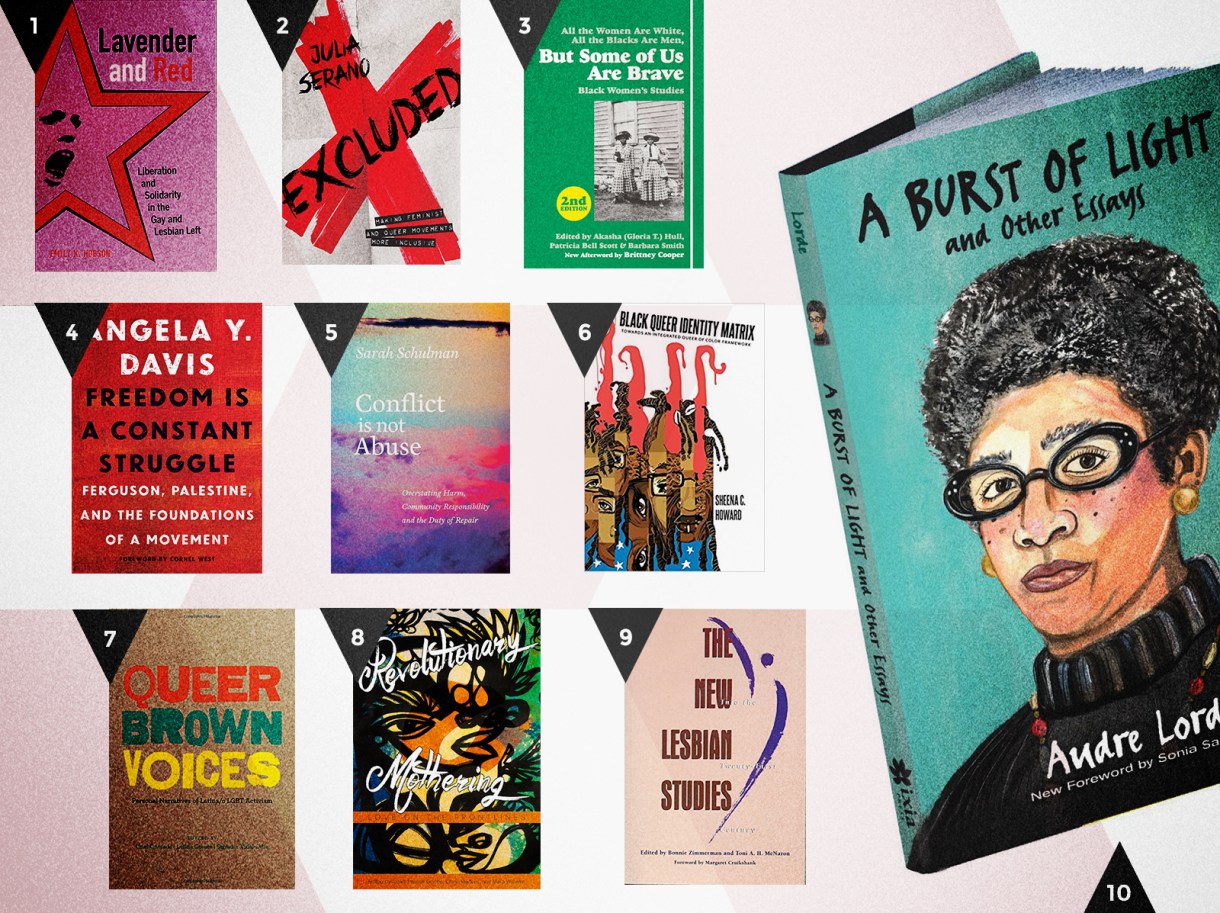 1. Lavender and Red: Liberation and Solidarity in the Gay and Lesbian Left, by Emily K. Hobson ($29.95), 2. Excluded: Making Feminist and Queer Movements More Inclusive, by Julia Serano ($15.46), 3. But Some Of Us Are Brave: Black Women’s Studies, by Akasha (Gloria T.) Hull, Patricia Bell Scott and Barbara Smith ($18.95), 4. Freedom is a Constant Struggle: Ferguson, Palestine, and the Foundations Of A Movement, by Angela Y. Davis ($10.84), 5. Conflict is Not Abuse: Overstating Harm, Community Responsbility and the Duty of Repair, by Sarah Schulman ($13.56), 6. Black Queer Identity Matrix: Toward an Integrated Queer of Color Framework ($29.95), 7. Queer Brown Voices, by Uriel Quesada and Letitia Gomez ($24.95), 8. Revolutionary Mothering: Love on the Front Lines, by Alexis Pauline Gumbs, China Martens, Mai’a Williams and Loretta J Ross ($12.20), 9. The New Lesbian Studies, by Bonnie Zimmerman, Toni A.H. McNaron & Margaret Cruikshank ($16.15), 10. A Burst of Light: And Other Essays, by Audre Lorde ($15.28)

Smart women and otherwise identified-queers and trans folks with big ideas for the issues facing us now and forevermore. I will not rest until everybody reads Conflict is Not Abuse, sorry. 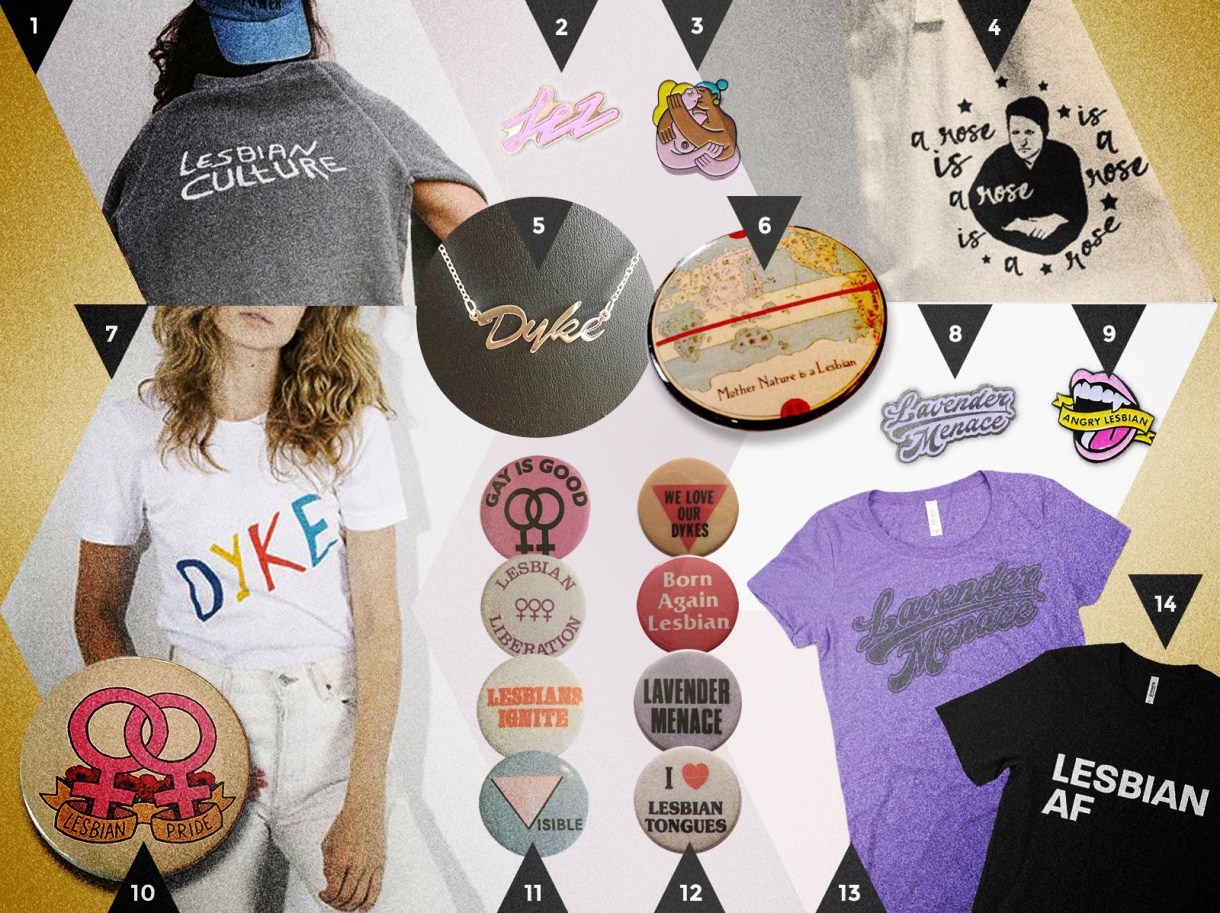 For Your Lesbian House 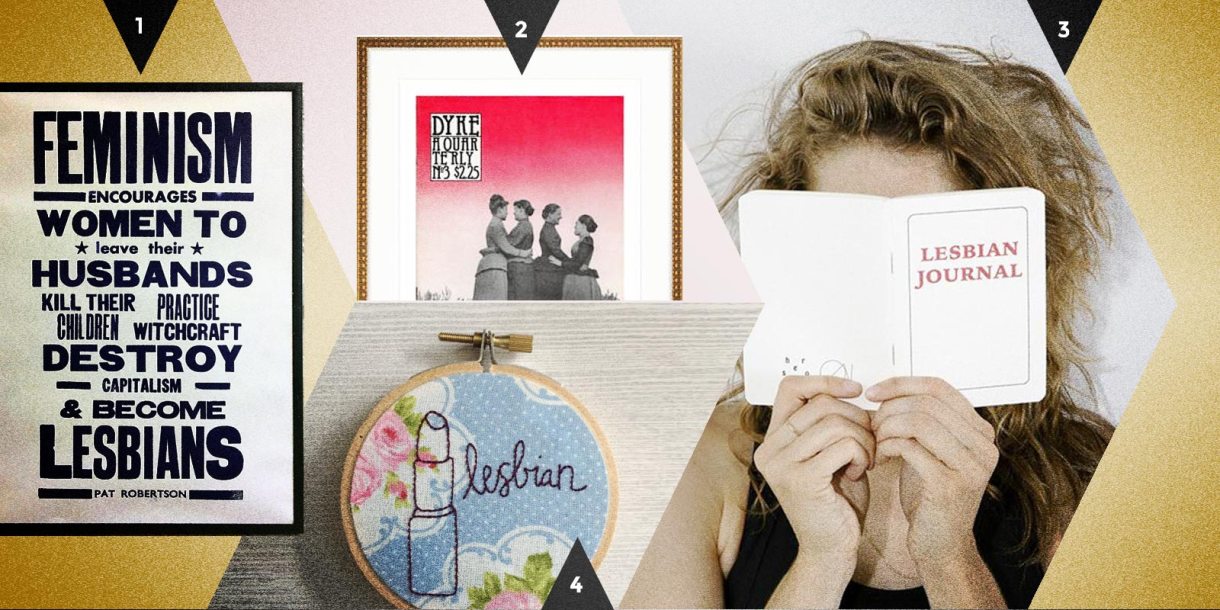