Opposition to gay-straight alliances in high schools across America isn’t new. From Flour Bluff, Texas to South Carolina, administrators have tried everything from banning all extracurricular clubs to rewriting entire school policies to make sure GSAs prohibited. After the epidemic of queer teen suicides that called policies that value “neutrality” over queer kids into question, one might have assumed that unnecessary demonization of a group that exists only to support queer youth with very minimal obligation on the part of the administration would lose popularity. But it seems that some denizens of Leesburg, Florida are determined to prove otherwise.

A meeting was held Monday to discuss the possibility of banning all extracurricular clubs — that is, groups that were not directly connected to academics or to specific courses. An application for a GSA had already been denied a year ago, and had been pointedly ignored by the principal this year. To be fair, many of the over 100 people who attended a meeting on the school’s policies surrounding a GSA in Leesburg’s Carver Middle School were in support of it. Many attendees reportedly wore red shirts to demonstrate their enthusiasm about it. Unfortunately, those community members who were in opposition to the club still managed to espouse virtually every irrational line of reasoning possible, and maybe even some that hadn’t been thought of previously. Although the students themselves had articulated the need for the group, citing concerns about bullying and a need for support, some community members seemed willing to overlook the ways in which anti-gay bullying is quantifiably bad for kids, or at least ignore the ways in which a GSA might help combat those issues. The connection between anti-gay bullying and GSAs seems to have been totally lost on some.

Others spoke out against the alliance, saying the real issue is bullying. Students, they said, would not find the support they need in a gay-straight group.

“It’s like gangs,” said Lori Pitner, a Tavares resident who spoke in opposition. “More kids in gangs end up killed than are not in gangs. I don’t see this as any different.”

Misinformed residents are one thing, but it appears that the school board may feel similarly, or at least may not be willing to take the stand it would require to support this GSA.

The ACLU is backing the students of Carver, calling on the federal Equal Access Act which says that schools can’t grant legitimacy to clubs based solely on what they think students should or should not be discussing. There is no way to tell from this point how the issue will be resolved; the decision on the school’s club policy was left unfinished, and will be brought back up at a later board meeting. 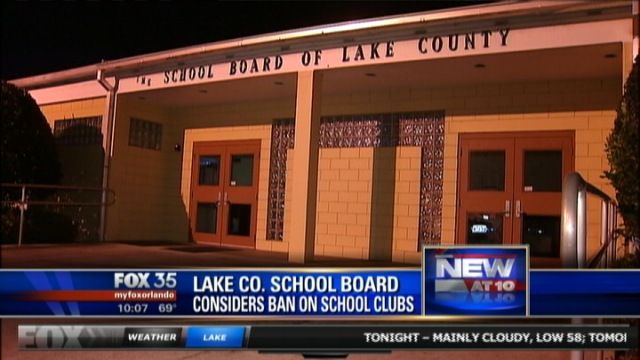 This is a deeply frustrating story, and not just because it’s unfair on behalf of the students of Carver Middle School. It’s frustrating because after all of the work that activists and everyday queer folk have put in, all the lives that have been lost, and all the assertions that have been made about how anti-gay discrimination just isn’t a problem anymore, this is a story that could have been read verbatim two years ago. It does, in fact, read very similarly in many ways to this story from almost exactly two years ago in March of 2011. In two years, we’ve seen several states legalizemarriage equality, and even seen the President “evolve” on the issue, but the situation for gay teens in much of America remains unchanged. 14-year-old Bayli Silberstein, an out bisexual student who’s led the effort to have a GSA established, has registered her surprise and disappointment at her school’s reaction. “I expected more from adults… I didn’t think they would be so judgmental about this.” Until those in charge of many schools in America decide that the wellbeing of gay students is important enough to take some risks on, it seems like Bayli and many others like her will continue to be disappointed.