Last week, the ACLU gave Flour Bluff High School an ultimatum: either allow senior Nikki Peet to start a Gay Straight Alliance, or face legal action. Yesterday, in a four-hour-long closed session, school administrators met to decide on a course of action while the GSA supporters waited outside.

The board conceded that a GSA will be allowed temporarily at Flour Bluff, and will be allowed to meet on campus for now. The school says it is “reviewing the policy” that it created in 2005, which it has previously cited as justification for refusing Nikki Peet the right to form an organized queer community of support, despite the fact that she’s complied with their every request. This may be enough to avoid a lawsuit for now, but it doesn’t seem like the school is ready to give up altogether: they’re still planning on making a “permanent decision” regarding the GSA at an unnamed later date. 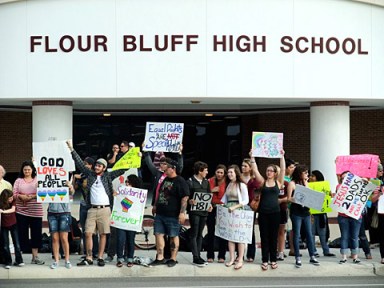 The law in question is the Equal Access Act, which orders that “if a school receives federal aid and has a “limited open forum,” or at least one student-led non-curriculum club that meets outside of class time, it must allow additional such clubs to be organized, and must give them equal access to meeting spaces and school publications.” Flour Bluff High has stated that a policy they enacted in 2005 covers this situation, and that it isn’t an act of discrimination against a specific (gay) club, but simply obeying the dictate of their own policy already in place. The ACLU will likely not let this stand; school policy isn’t enough to excuse them if the policy itself is in violation of the Equal Access Act. However, the school may try to excuse their non-compliance by referencing a different clause of the Equal Access Act, one that says clubs can be denied if they “materially and substantially interfere with the orderly conduct of educational activities within the school,” which is a claim many other school districts have made in this same situation.

Ironically, Nikki was hospitalized with an infection for the entirety of the Tuesday night showdown, and so her family showed up outside the trustees’ meeting in her stead. Following the decision, Nikki’s mother said she “couldn’t be prouder,” adding that she’s always taught her daughter that “everyone is equal.” But she seemed to be under no illusions about the real feelings of the school administrators: “It seems to me the board members kind of want to pretend that this doesn’t exist in their school.”

Supporters from Texas A&M’s GSA – who have been in Flour Bluff since the beginning of the controversy – were also present Tuesday night, as were representatives of the ACLU. Jay Raymond of the TAMU GSA summed up the group’s feelings outside: “There’s no chance of this dying down until what we want is what we get.”