Chances are you’ve been witness to at least one person rolling their eyes and asking what the big deal is about calling stuff “gay.” They’re just words right? It’s just slang! If kids, teens and adults can say it without a second thought, why are you making a mountain out of a mole hill? Well actually, sometimes they’re a little bit more. Even though they’re “just words,” hearing little indignities on a regular basis makes life difficult, in quantifiable ways.

Researchers at the University of Michigan wanted to know how those three little words affect LGB students. Is it just an insensitive expression that holds no meaning or does it actually have consequences? Woodford et al. theorized it could cause LGB students to feel othered, anxious and reluctant to come out of the closet, which would negatively affect their physical and mental health. They surveyed 2605 students on their health, comfort, sexual orientation, gender expression and experiences with hearing “that’s so gay.”  Using self-reported sexualities, the researchers focused on the answers of the gay, lesbian and bisexual respondents.

As it turns out, hearing those simple words can be an issue. Hearing insults in your everyday conversations isn’t as easy to brush off as we want to believe. LGB students that frequently heard “that’s so gay” tended to feel left out, have headaches and experience dietary problems. In fact, a 2011 study echoed the problem, “showing that ongoing stigma and social inequality increase stress and reduce well-being for lesbian, gay, and bisexual people.” It doesn’t seem like the issue will be going away anytime soon, as almost 9 out of 10 LGB participants in the University of Michigan study had heard it in the past year. On the bright side, another study published this year found that people were less likely to use the phrase if they knew more LGB people.

Saying that words hurt can make one even more of an outsider. When Rose wrote about teens’ flippant use of gay slurs, some Autostraddlers were annoyed that people used “that’s so gay” while others were annoyed that people thought its use was an issue. It’s difficult to discuss because peoples’ experiences are so different, but it seems that the science shows that while the phrases seem insignificant, but they add up. 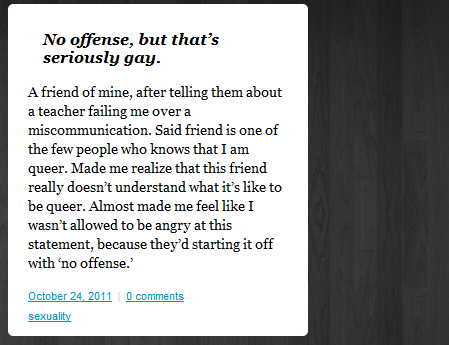 Via the Microaggressions Project

The team at the Microaggressions Project want to show just how easily those phrases accumulate in our everyday lives. “Microaggressions” are those everyday sayings “that communicate hostile, derogatory, or negative … slights and insults” towards marginalized groups. Although the term was coined to look at tiny instances of racism, it has been expanded to include the other types of bigotry you experience every day. While a lot of people ignore the intolerance hidden in tiny slurs, a lot of people can’t. The project serves as a bulletin board, collecting overheard phrases that “create and enforce uncomfortable, violent and unsafe realities onto peoples’ workplace, home, school, childhood/adolescence/adulthood, and public transportation/space environments.” Instead of outright shaming people for making slights, it gives viewers the chance to see how othered people navigate seemingly everyday conversations. Although people may not “mean it that way,” it doesn’t negate the fact that some listeners still hear it that way. 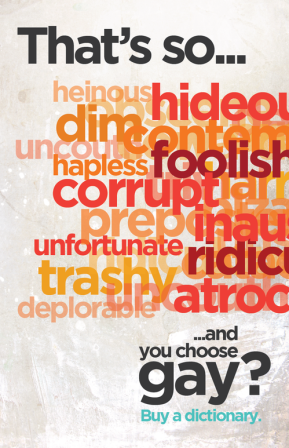 Via ‘That’s So Gay’ Needs to Go Away

Maybe this’ll be a different school year where students actually learn something. Think B4 You Speak has over 421k fans on Facebook pledging to make a difference and erradicating It. ‘That’s So Gay’ Needs to Go Away has eleven days left on Indiegogo raising funds to create a poster and T-shirt campaign.  Other groups are looking to start gay-straight alliances at their schools and some are succeeding. Hopefully 2012 will be the year “that’s So Gay” is erased from the curriculum.