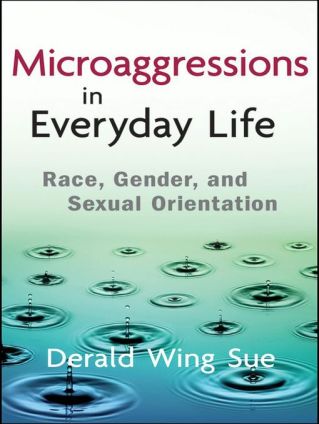 Usually when somebody tweets at Autostraddle about a book we should download, I prepare myself for the almost certain possibility of a self-published lesbian romance novel with unfortunate computer-created cover art and at least four grammatical errors on the first page. But this wasn’t that, thank the Lord. This was something much better!

Microaggressions in Everyday Life: Race, Gender, and Sexual Orientation was released last year by Derald Wing Sue, Professor of Psychology and Education in the Department of Counseling and Clinical Psychology at Teacher’s College, Columbia University.

Microaggressions in Everyday Life: Race, Gender, and Sexual Orientation is about the damaging consequences of everyday prejudice, bias, and discrimination upon marginalized groups in our society. The experience of racial, gender, and sexual-orientation microaggressions is not new to people of color, women, and LGBTs. It is the constant and continuing everyday reality of slights, insults, invalidations, and indignities visited upon marginalized groups by well-intentioned, moral, and decent family members, friends, neighbors, cow- orkers, students, teachers, clerks, waiters and waitresses, employers, health care professionals, and educators. The power of microaggressions lies in their invisibility to the perpetrator, who is unaware that he or she has engaged in a behavior that threatens and demeans the recipient of such a communication.

While hate crimes and racial, gender, and sexual-orientation harassment continue to be committed by overt racists, sexists, and homophobes, the thesis of this book is that the greatest harm to persons of color, women, and LGBTs does not come from these conscious perpetrators. It is not the White suprema- cists, Ku Klux Klan members, or Skinheads, for example, who pose the greatest threat to people of color, but instead well-intentioned people, who are strongly motivated by egalitarian values, believe in their own morality, and experience themselves as fair-minded and decent people who would never consciously discriminate. Because no one is immune from inheriting the biases of the society, all citizens are exposed to a social conditioning process that imbues within them prejudices, stereotypes, and beliefs that lie outside their level of awareness. On a conscious level they may endorse egalitarian values, but on an unconscious level, they harbor antiminority feelings.

Although I’d honestly like to spend the rest of the week reading this and then interviewing Derald Wing Sue for Autostraddle, I’m too f-cking busy. So I’d like to open this up to you — are you interested in reading this entire book and then interviewing Derald Wing Sue for Autostraddle? We’d give you a month and send you the book. You’ll need to be a self-starter comfortable with all aspects of soliciting and executing an interview. You need a strong background in this kind of material and experience writing outside of an academic context — in other words, you need to be able to write conversationally, not like it’s a thesis.

If this sounds like a thing you want to do, email autostraddle [at] gmail dot com.