“What they’re gonna do ’cause we’re the same sex, and we’re spending all this time?” Alicia Keys asks in the opening line of her gayest move since spending all of 2002-2005 dressing like that cute girl you knew in college who had Queen Latifah, Missy Elliott and Girlfight (2000) posters hanging up in her dorm room. On her new album HERE, her first in three years, she has a lot of songs, but none as specifically suited to our interests here at Autostraddle than “Where Do We Begin Now,” a song about first-time sapphic attraction. 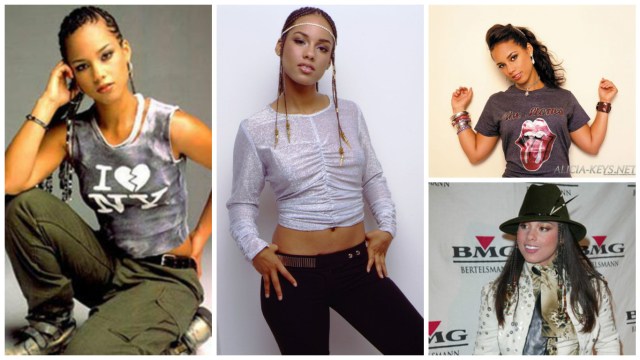 These are just a few of the many queer lady fashion statements Alicia made in the early 2000s.

This song is very very much about the time when you’re a baby gay and you’re having your first relationship with another girl. Instead of just a gay love song, Alicia is singing about being unsure how to tell her friends, how to tell if it’s love or something more like the “Girl Crush” in that Little Big Town song, how to tell if it goes wrong and other questions someone who’s never dated a girl might have. It should be noted, also, that the exact wording of some of the lyrics are potentially up for debate. Feel free to weigh in. Anyhow, let’s answer a few of those questions for Alicia and anyone who listens to the song and is like “girl, I feel you.”

“What they’re gonna do ’cause we’re the same sex and we’re spending all this time?”

“How will I know this love is strong?”

(these are the lyrics according to multiple websites)

Does she cook vegan stir fry for you? Does she take you to Ikea and Home Depot? Does she buy toys for your cat? If yes then the love is strong.

“How would it tells when it goes wrong?”

(again, the lyrics according to multiple websites)

Does she think Kissing Jessica Stein is a better movie than Carol? Does she think voting for Trump “makes some sense?” Does she wear socks in bed? If yes, then it’s going wrong.

“How many know this love song?”

(these are those same lyrics the way I hear them)

Well, some studies show it’s as little as 2%, but I think that probably more like 15% or 20% of people are gay. Also once this album has been out for a little longer, probably a sizeable number of people will know this literal love song to one degree or another. Very meta.

“How many times it goes wrong?”

(this is the lyric according to the super helpful Laura) I mean, lesbians have a lot of feelings, we’re kind of famous for our drama; it’s almost certainly gonna go wrong sometimes. Sorry about that.

“Where do we begin now?”

How about going to a Tegan and Sara concert? Or if that’s jumping in too far in the deep end, a Carly Rae Jepsen concert? If you’re asking about something else, you can check out this helpful article.

“What will we tell our friends now?”

They’ll probably pick up the clues, and if not, you can just say “Hey, friends, we’re gay.”

No matter what the lyrics are, this song is definitely a step in a direction for Keys. Lyrically it’s a queerer direction, but who knows if it means anything for her life (probably not, but we can hope, right?) But no matter what, yay for Alicia! I hope this leads to a lot more gay stuff in your life!