This weekend, let’s dress up in costumes, ride bicycles in a parade, then drink beer while watching shows and circus acts and people dancing with bicycles. What about this doesn’t sound like the most awesome day of all time? It’s a legitimate deal and it’s called Tour de Fat.

Tour de Fat is hosted by New Belgium Brewing (you may know them if you like Fat Tire beer and really, who doesn’t like Fat Tire beer?) and started in my beautiful hometown of Fort Collins, Colorado in 1999. Since then, they’ve raised $2,000,000 for local cycling charities and have moved on to tour the country. 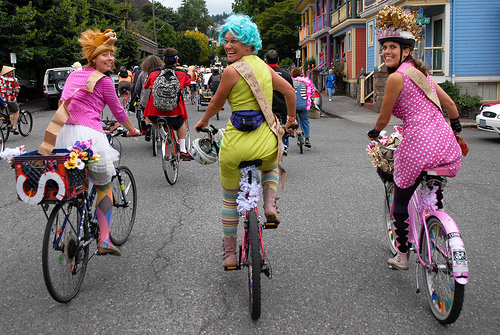 One of the best parts of Tour de Fat is the car trade-in deal. Do you have feelings about your carbon footprint? Well, you can assuage that  guilt by volunteering to give New Belgium Brewery your car and promising to live car-free for one year in exchange for $2,250 to pay a local bicycle shop to build you the perfect commuter bicycle. Do you know what a sweet ride $2,250 could buy you? Seriously, that much money could invent a new kind of bicycle that massages your shoulders as you ride to work. I’m serious. The cars are auctioned off and the money goes towards local cycling charities.

If all that hasn’t all sold you, let me just mention one more tiny detail: Tour de Fat is a great place to meet ladies. Because who loves beer and bicycles more than lesbians? No one, that’s who.

To recap: You get to dress up in a silly costume, ride your bike, check out cute girls, drink beer and watch performances. What part of this doesn’t sound like the perfect day? Here’s when you can get in on the fun!

I’ll be there this Saturday. I’m dressing as a Republican, though I’m having reservations about riding a bicycle in cowboy boots with baby dolls strapped to my hips. 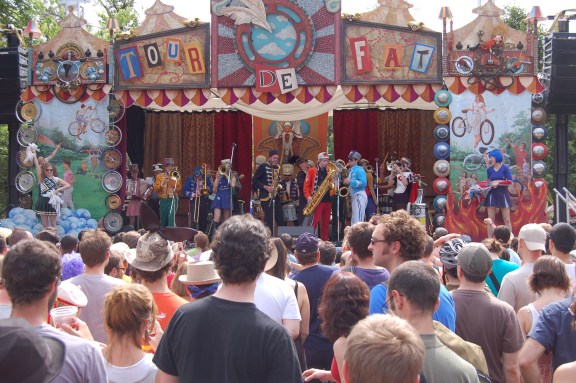 In order to celebrate Tour de Fat and my intense love of beer and bicycles, here’s a playlist all about bicycles! Listen to this while you’re costuming up or to live vicariously through other Tour de Fat riders if you can’t attend this year.

– The Flobots
The Bike Song

What are your favorite bicycle songs? Or songs you listen to on your bike?