Ever since I can remember, my parents have introduced me to distant relatives and old family friends I’ve never met as “La Lupita.”

Translation: “Omg, you’re Lupita?! Wow, hi! You’re so beautiful and so grown up! I met you when you were a baby.”

Also, my parents and grandparents always reference me as “La Lupita” in conversations with these people because I’m the middle child and pretty forgettable. If they didn’t say “La Lupita” they wouldn’t remember I even existed. 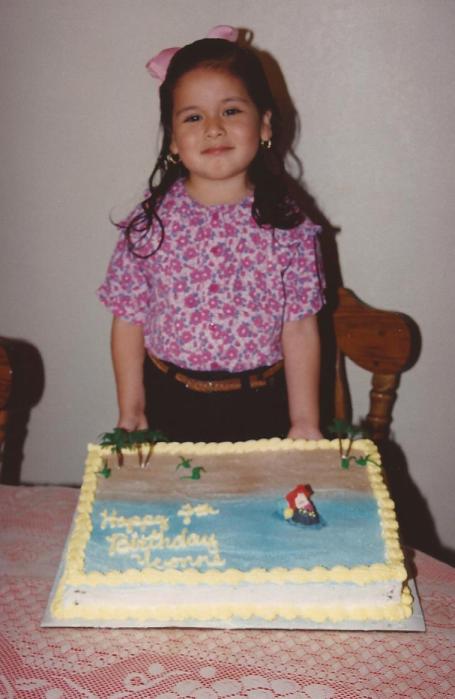 My name is not Lupita, short for Guadalupe, but the moniker is how people back home remember me, because they connect it to my birthday, December 12 — the day (mostly Latino) Catholics celebrate La Virgen de Guadalupe. I’ve always felt a strong connection to La Virgen because we share a special day, a day when the world celebrates us — in her case, more literally and in mine, the world in my vicinity. La Virgen has always been dear in my heart and always will be, but the way I view her has changed throughout the years, through various lenses with different interpretations, including now as a queer woman.

You’ve seen her everywhere: painted on sides of buildings as commissioned murals or graffiti, on candles in the supermarket, on t-shirts, on bodies, on jewelry, in art exhibits, on tumblr, on anything and everything. My mom has a mini shrine in her closet, and my grandma has a more typical altar in her garden, complete with a waist-high statue secured in a cement slab with flowers surrounding it. If someone in my family is going through difficult times, needs some protection or guidance, we light a candle with La Virgen’s image on it and pray to her. Some Latino Catholics have more faith in La Virgen than they do in Jesus, which is probably pretty blasphemous to say, but I’m being real. We’re very serious about La Virgen. Let me tell you why. 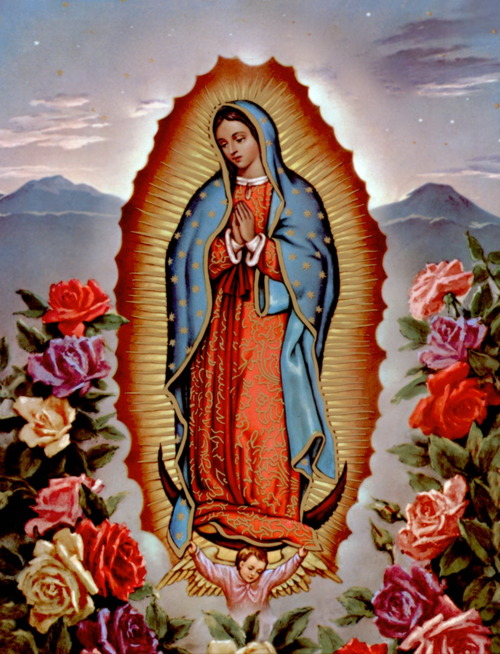 La Virgen de Guadalupe is celebrated on December 12, especially in Mexico, in honor of when she appeared to Juan Diego, a poor indigenous man about 500 years ago in present day Mexico City. During this time, the Spanish had recently conquered Mexico and thus began imposing their Catholic religion on the indigenous people, the Aztecs. The Virgin Mary appeared to Juan Diego as a brown woman with sun beams all around her on a former sacred hill devoted to the Aztec mother goddess, Tonantzin. In his native language of Náhuatl, she told him to tell the bishop to build a church at the same spot where she appeared. The bishop asked Juan Diego for a sign to prove what he said was true. La Virgen told Juan Diego to gather the roses growing on the barren hill and deliver them to the bishop. Roses growing in December was a miracle in itself, but once Juan Diego reached the bishop, he unfurled his tilma , a type of cloak, where he was carrying the roses to reveal an imprinted image of La Virgen de Guadalupe. And bam! – the rest is history. They built her a church in the same spot and where the orginal tilma with her image still hangs today.

Secular history suggests that a bishop in the mid 1500s commissioned a painting of the Virgin Mary from a native artist who created an icon that fused the Virgin Mother of God and the Aztec mother goddess, Tonantzin. It was a strategy to help Spaniards gain more converts by relating to the indigenous people and their native religion. I’d like to think the indigenous people tried so hard to hold onto their culture and beliefs and infused it with what their colonizers wanted them to believe in. Whatever the case might be, La Virgen de Guadalupe became a symbol of the new Mexico, la mestiza, a hybrid culture of Spanish and indigenous. 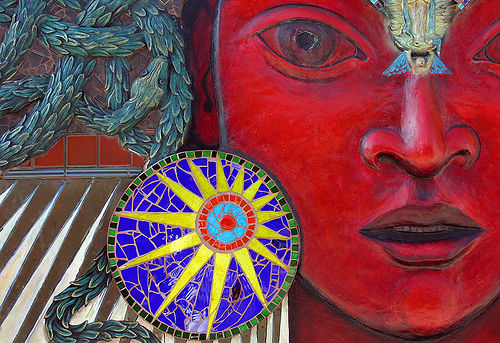 As a child, I didn’t quite understand how the Virgin Mary and La Virgen de Guadalupe were one and the same. I thought they were two different deities because they looked different and had different names. I would argue that they are two different beings. One is the white-washed mother of Jesus from the Bible and the other is a cultural icon, a mystical being with healing powers, a brown goddess that reflects the people she serves.

As a kid, I saw La Virgen as my protector. Whenever I was scared — mostly of the dark, Big Foot and UFOs, (yes, I was a weird child) — or when I was feeling anxious, I would pray to her and I would automatically feel safer. She was my guardian angel and I had faith that she would take care of me, just like the mother she symbolized. I also hoped that maybe she gave me preferential treatment because of the special day we share — like I had a double force field to conquer my fears. She was my superhero and I was comforted by knowing she was there watching over me.

On my 15th birthday it was especially significant to pay tribute to La Virgen, because in my culture this is the passage to adulthood. Traditionally during a Latina’s quinceañera mass, she pays homage to La Virgen de Guadalupe by bringing flowers to her altar in the church. I brought her roses on my quinceañera as to say “guide me through this newfound womanhood.” I was too young to form my own nuanced thoughts on what womanhood meant for me at that point, but the patriarchal world had already defined it for me. As a Latina woman, my machismo-filled community told me I was to be pious, pure, and a caregiver — just like La Virgencita. I was on the path to get married, give birth, raise a family and above all else have faith in God. That’s what society told me womanhood looked like.

Don’t worry, I didn’t follow society’s definition of womanhood, as you might’ve guessed. Because here I am writing on Autostraddle.com as a heathen feminist queer woman. 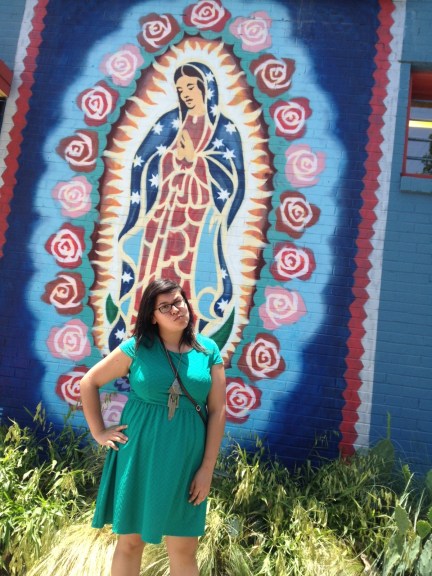 My brother said, “Quick, look Latina” and snapped this photo. And so I tried my best to channel my best ‘badass bitch’ because apparently that’s what I think of when I hear Latina.

I figured out I was “not straight” when I was 17 years old, but it wasn’t until college that I embraced my lesbian identity. I dropped out of the Catholic church before I even started grappling with my identity, so I didn’t really have religious-related afflictions. I did wonder for a hot second if La Virgen would hate me/disown me for being a lesbian, but I knew she didn’t care, because not only did she love me with open arms and no judgement, but I also felt that she supported my women-loving self. After all, she resembles a vulva. I’m not sure if it was intentional or not, but being the Mother of God and all, it makes sense. 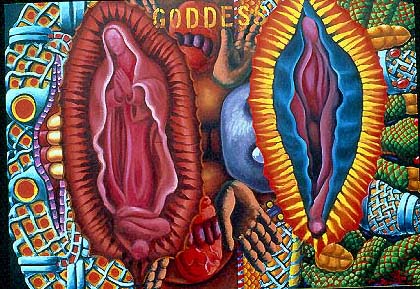 I hate that this was created by a man, Alfred J. Quiroz

Chicana author Sandra Cisneros writes in her essay “Guadalupe the Sex Goddess” about how her religion and culture suppresses everything that is sexual. At first, she views La Virgen as a “goodie two-shoes” and resents her for enforcing a life of “marriage and motherhood.” It wasn’t till she viewed La Virgen as representations of Aztec goddesses and as a woman, just like herself, did her view of La Virgen change.

“Like every woman who matters to me, I have had to search for her in the rubble of history. And I have found her. She is the sex goddess, a goddess who makes me feel good about my sexual power, my sexual energy, who reminds me that I must, as Clarissa Pinkola Estés so aptly put it, “[speak] from the vulva … speak the most basic, honest truth,” and write from my panocha…

I couldn’t agree with Cisneros more. For me now, La Virgen de Guadalupe subverts the Catholic Church, machismo, the very image of the Virgin Mary by being indígena, mestiza. She is a woman deity that I get to worship in the way that I want. She is queer. 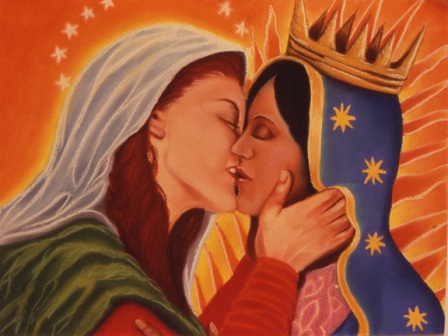 The image of La Virgen de Guadalupe is a cornerstone in my culture that transcends just being a religious or spiritual symbol. She is a brown beautiful goddess that looks like me and my people. She is a symbol of almighty femininity and womanhood. She is the mystical being that watches over me and my partner and my dog and my family. She is my queen in my heart forever.