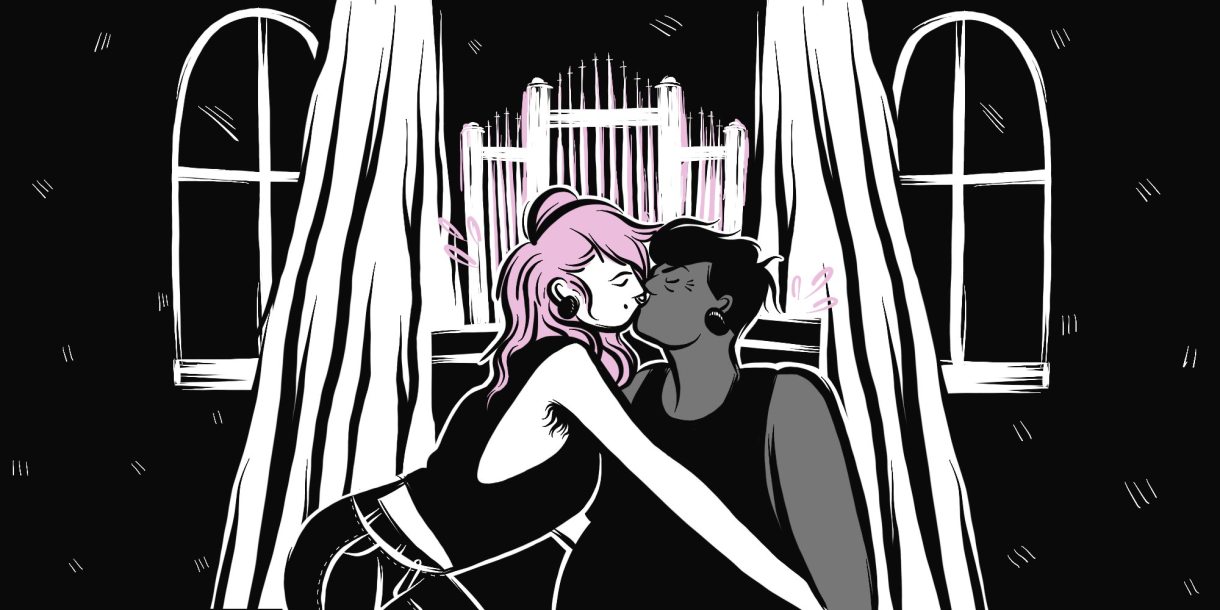 This story begins commonly. It was a dark and stormy night.

My partner and I were living gutter-punk adjacent, struggling in a small rural town in northern Wisconsin. We’d survived most of the summer on a five pound bag of fun-sized Snicker bars a train hopper rescued from the dumpster behind Shopko, closed now for the usual small-town reasons. Food and money was scarce, a reality that turns many of us toward taking whatever we can to survive. She was in the midst of transition and unable to secure safe employment considering her yet-to-be-state-sanctioned womanness. I was still in the process of accumulating my still-accumulating student debt, just 20 years old. We had no familial support; our queerness reviled, my family had little-to-no resources to spare. The only establishment open late with the possibility of free food was the local Wal-Mart. We took off on our bikes with the intention of shoplifting all the proper ingredients to make homely ham sandwiches.

This is enough guilt for me to admit and feel immediately damned. Having been raised coercively Catholic by my now well-meaning grandmother, even the thought of stealing makes me quiver. We’d seen thunderheads gathering at the far end of the lake earlier that afternoon, and her suggestion that we liberate deli slices and a loaf of whole wheat convinced me that my plummet towards hell was growing increasingly unavoidable. Atmospheric activity has always struck me as prophetic. I’m learning now that my queer love is worth sacrificing any preconceived purity instilled in me by my church.

We made it out of the Wal-Mart without a hitch, most likely due to her whiteness and my general passing-for. She’s a master thief, once walking right out of a department store with a stolen downy winter coat zipped just wrapped around her slender body. She won’t tell me her secret of how she wriggled around the ink tags. I don’t think I need to know. Is it a kind of appropriation when the poor take for themselves the products needed to survive? Or is this more of a type of self-love, a fierce determination to make it through to at least the next day?

We ate the sandwiches on the curb next to the pharmacy intercom, which for some reason repeated a sort of drum-fill static. Bummm-tss. Bumm-bumm-tss. We wolfed down two, three ham sandwiches — maybe everything was ok, here I was having a midnight picnic with my lover, the sort of cutesy thing someone might post on Instagram if we could’ve proved we spent money to do so. We were recognized clearly as lesbians in public and it was an even more delectable risk to put my arms around her as wind blew rubbish past our feet. All that theory I was learning at the fancy college was coming together — this was the praxis. Screw the system from the inside out. What would Haraway have to say about my amusement at the intercom, creating it’s own unheard midnight music? Probably not much, but at that point in my naïve and desperate queerness, the commonly dark and stormy night seemed endless in meaning.

Our base hunger finally satisfied, we rode off toward Lake Shore Drive, affectionately referred to as LSD. About a mile into the ride we felt the wind shift, and then rain pelted us like it wanted to take our skin. We were determined to make it to the other side of town, where we shared a definitely-haunted room. We were nothing if not determined. Lightning threw itself across the sky before us, and we finally called the ride quits when we came to a stop sign whipping back and forth like it was made of cellophane. The only structure around was Our Lady of the Lake Church, a Catholic church, a place we’d been told was a sanctuary and which we fled from in youth with our lives clutched to our chest.

So this was it. This was my damnation incarnate. What were the odds, I thought, that we’d be forced to seek shelter from the storm in the belly of what I feared most? After our financial, sexual, and gender transgressions? Core to my vulnerabilities regarding class, worth, love, abuse, and death is this: I see most everything as an omen of the worst that’s yet to come. We smoked a hand-rolled cigarette on the steps of Our Lady, huddling together beneath the entrance’s shallow arch. You open it, I said. She was just giddy. No, You.

The door opened too easy. Our first task was to scour the building for fellow salvation-seekers — in the spirit of Christ, maybe we could break bread. We strolled up the aisle, and she crossed the altar in a sinful manner. In the words of my people, I just couldn’t. Could. Not. I was the only altar server at my church for three years, my pre-pubescent peers in-convincible and myself with much to lose. The stakes: if I didn’t participate in CCD, as an altar server and in all the available youth groups, my grandmother would have my siblings and I removed from my mother’s custody. Then we were removed from her custody and put into my grandmother’s care, my nascent queerness expressing itself in the public library bathroom. I’d be thrown further into Wisconsin’s custodial care if I didn’t repent and devote myself to the work of wearing too-long, wax-splattered robes and laying communion out the wrong way no matter how hard I tried. The distinctions between left and right confound me.

I took to the church’s pamphlet display. The literature was free for the taking, there was no sin there and I could find something to laugh about. But we were cold, wet and shivering. I confessed to her that I was always denied the opportunity to sing in the children’s Christmas choir, relegated to the role of shepherd in the holiday play. She led me up the spiral staircase into that one threshold I’d never been. The revered choir loft. Adorned in velvet carpet.

It doesn’t get more stereotypically transgressive than that. A month of living in her Astrovan one winter taught us that stripping out of the clothes one’s become cold in is the ticket to warmth, that and another’s body. We could still hear the thunder broiling outside. As she began kissing my stomach, kissing the trail of hair leading lower, a flood of excuses for the church’s trauma overtook my mind. What about Saint Kateri, the only statue of another Ojibwe woman you’ve ever seen, beneficent and glowing? Imperative to remember how Catholicism was thrust so violently at this part of my ancestry, Catholicism’s wielding of colonialism’s rusted blade. What about the church’s care of the poor, St. Vincent de Paul and the cookies you baked for the less-fortunate winter after winter? Imperative to remember how all the “less-fortunate” we delivered cookies to had diabetes, how those cookies went directly back to our priest. Remember the little injustices. How the whole congregation laughed when I said my prayer was for my family to have more food. Sure our sin was plentiful, but my church had been behaving badly for ages. I could be forgiven this tonight.

Halee Kirkwood is a poet 3/4 of the time, is a current MFA student at Hamline University, and is a descendant of the Fond du Lac Band of Lake Superior Ojibwe.

Halee has written 1 article for us.