In the past week, I have:

That means I benefited from the Americans with Disabilities Act a minimum of 74 times in seven days. And those are only what I can quantify; add in, for instance, the fact that I work full time for fair pay alongside nondisabled people, and the ADA’s importance to my life becomes immeasurable. It’s one of those laws that’s everywhere if you know what to look for. But treating the ADA like civic wallpaper means taking it for granted — when it’s actually far from a foregone conclusion. Earlier this year the House of Representatives passed H.R. 620, a bill that decimates key ADA provisions under the guise of “education and reform.” This latest attempt at cutting off the ADA’s nose to spite its face fortunately stalled en route to the Senate, but legislative sneak attacks aren’t the only threat at hand. There’s also the assumption that the ADA is enough — that just by being a landmark law, it sealed the deal for disability rights. But as anyone who doesn’t fit the mold of Trump’s America can tell you, rights do not guarantee justice. Ending that conversation with the ADA is like passing Go, collecting $200, and then not moving forward another square for 28 years.

The Center for American Progress won’t accept that stagnation. Last week, CAP launched the Disability Justice Initiative, making them the first ever think tank to host a dedicated disability project. (Yes, the first ever, and it’s 2018. Take a minute to consider what that means.) The DJI’s coming out party demonstrated what happens when intersectional justice is the starting point instead of the finish line. This isn’t your run of the mill activist space — and women are running the show. (For real: women consistently held center stage at not one, but two kickoff events for this initiative. Be still my heart.)

“CAP has been incubating disability policy work inside of its Poverty to Prosperity Program since 2014,” explains Rebecca Cokley, Director of the Disability Justice Initiative. Rebecca Vallas, the VP of that team, came to the organization with the desire to not only build out the work on poverty, but also a program of work on criminal justice and [a program on] disability. Given the intensity of the fight to save the Affordable Care Act last year and the continued assault on disability rights in general, CAP decided it was time to create the first disability policy shop inside of a DC-based national think tank.”

A who’s who of disability advocates convened to introduce the initiative, including Chai Feldblum, the first openly lesbian Commissioner of the Equal Employment Opportunity Commission and the fourth disabled person to serve on the EEOC; Vilissa Thompson, founder of Ramp Your Voice! and #DisabilityTooWhite; and Sarah Blahovec, Disability Vote Organizer at the National Council on Independent Living. And that was all in the leadup to the launch. When those are the speakers at your night-before reception, you know you’re onto something big.

“We are at a moment now in our country where people are energized,” Feldblum said. “People are focusing on making progressive social change. Our challenge is to channel that energy so that the people who are lifted up, the people who are helped, are those who have been shut out and kept back for years — so that they can now live lives of safety, dignity, and integrity. But here’s the thing: we have to act intentionally and strategically to make that happen.”

Cokley concurs. “I feel like the disability community needs to spend some time asking itself: How are we working together across movements in the progressive space? How are we centering the voices of people with disabilities who are fighting multiple oppressions? How are we embodying sustainability of ourselves in such a time where it seems like the ground underneath us is always shifting and we are drinking not from a fire hose, but from a flamethrower? Disability justice, as established by thought leaders and activists including Patty Berne, Mia Mingus, Leroy Moore, and Eli Clare, created a series of principles several years ago that was significantly different from what was being talked about art the time: principles like collective liberation, intersectionality, interdependence, and centering the dialogue on those in the disability community who faced multiple forms of oppression. Frankly, it’s the way all disability organizations should be doing business.” 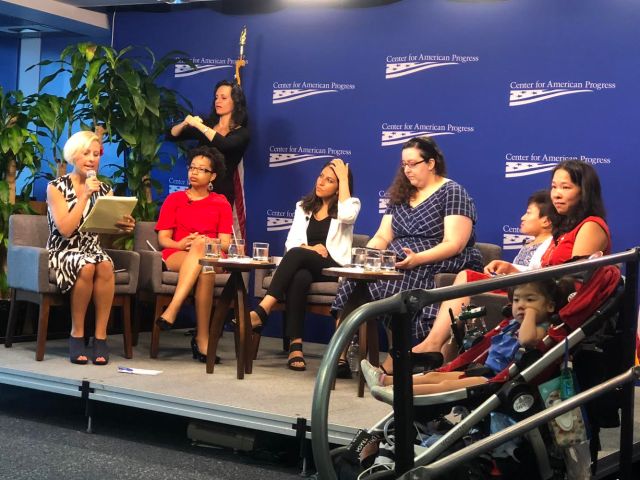 “I think we should talk about intersectionality, in addition to lived experiences and how we communicate with a greater population, as a way to draw strength for ourselves, and think of it as a position of power,” Duckworth said. “It’s really about showing the progressive community that we are at the forefront of their fight, and it’s the same fight.”

Laura E. Durso, Vice President of CAP’s LGBT Research and Communications Project, has some insights for queer folks looking to foster that solidarity with the disability community. “The fight for access to the public square is a major intersection of our work now. We have real work to do to show the harms of overly broad religious exemptions for all marginalized groups and how the outcomes of things like odious bathroom ban legislation affect a wide range of people who need equal access to public spaces. When it comes down to it, we all deserve that right, and the disability community is an incredible partner for us in that fight.” As Cokley puts it, bills like H.R. 620 and North Carolina’s infamous HB2 are “cut from the same cloth — intended to keep one group of people out.”

The Disability Justice Initiative offers a promising model for the coalition building required to survive our political upside-down. “We are living our values,” Cokley says. “We are amplifying the work, the voices, and the leaders in multiply-marginalized communities. We are committed to bringing on staff who have this lived experience. We are committed to working with the experts — disabled people themselves — to create tools and resources that they want and that we can help supply.”

“The goal is to see other progressive movements see the value in authentically integrating a disability justice framework. Because there is no issue or constituency right now that is not impacted or doesn’t include people with disabilities, even if they don’t see people, or understand the nuance of the issues,” she continues. “Disability justice as a framework can be a real opportunity to have some of the tough conversations we’ve needed to have, and also make our movements more sustainable for the long-term.”

For more information on the Disability Justice Initiative, follow CAPDisability on Twitter, visit #DisabilityatCAP, and watch this introductory video from the Center for American Progress.