You might have heard of the National Transgender Discrimination Survey, published last year by the National Gay and Lesbian Task Force.  As part of the NTDS project, the Task Force also recently published an auxiliary report focusing on the 212 transgender and non-gender-conforming Asian-Americans and Pacific Islander respondents to the survey. Like the NTDS report, this publication is heartbreakingly titled “Injustice at Every Turn.”

The queer APIA community needs to see these statistics, and accessibility of the publication has been a top priority for the National Gay and Lesbian Task Force. The Task Force has teamed up with the National Queer Asian Pacific Islander Alliance and the National Center for Transgender Equality to publish this report in seven languages. According to Jack Harrison, the manager of the Task Force Policy Institute, the publication is coming out in Chinese, Korean, Vietnamese, Tagalog, Khmer, Hindi and Tamil and copies are readily available for viewing and download on the Task Force website.

The report itself is emotionally difficult to read. According to the report, “The combination of anti-transgender bias with structural and interpersonal racism meant that transgender and gender non-conforming people of color, including those who were Asian American, South Asian, Southeast Asian and Pacific Islander [API] experienced particularly devastating levels of discrimination.” The survey reports that, among other statistics, API transgender and gender-nonconforming individuals are more likely to live in extreme poverty, to be affected by HIV and to have attempted suicide than transgender gender-nonconforming people of all races.

The report also mentions that the discrimination and “anti-trasngender bias” that many API transgender and gender non-conforming individuals face revealed “the complex interactions of that bias with race, immigration status, language ability and socio-economic status” — a complex mix of different types of discrimination coming at respondents from all directions.

Some important findings in “Injustice at Every Turn”:

+ 18% API respondents reported living in extreme poverty with a household income of less than $10,000 a year, compared with 15% poverty rate of respondents of all races.

+ 56% of API respondents have attempted suicide.

An important part of the report was about family acceptance of transgender and gender non-conforming API individuals and the fact that this has had a significant impact on rates of suicide, homelessness and HIV in API respondents. It’s remarkable how having an accepting family has affected the statistics.

+ 44% of API respondents were significantly accepted by their families. 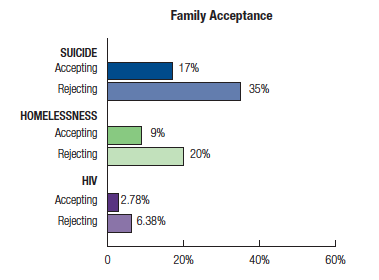 What I love about this publication is that the Task Force, NQAPIA and NCTE have placed such an emphasis on language and cultural barriers — not only as they affect access to health care and counseling, but also access to the survey itself.  According to the publication:

“The NTDS was administered in two languages — English and Spanish. However, nearly 80% of API Americans speak a language other than English at home and 36% describe themselves as speaking English less than ‘very well.’ Unfortunately as a result, the NTDS was inaccessible to large portions of the API population.”

The Task Force’s choice to focus on API transgender and gender non-conforming individuals, not just as objects as study but as full members of the LGBT community, is really commendable. The publication’s insistence on outreach and awareness is amazing — the survey team has worked hard both to ensure access to API individuals whose first language isn’t English and to conduct the next NTD survey carefully so that it reaches all possible respondents.

Click here to read “Injustice at Every Turn: A Look at Black Respondents.”

Click here to read “Injustice at Every Turn: A Look at Latino/Latina Respondents.”